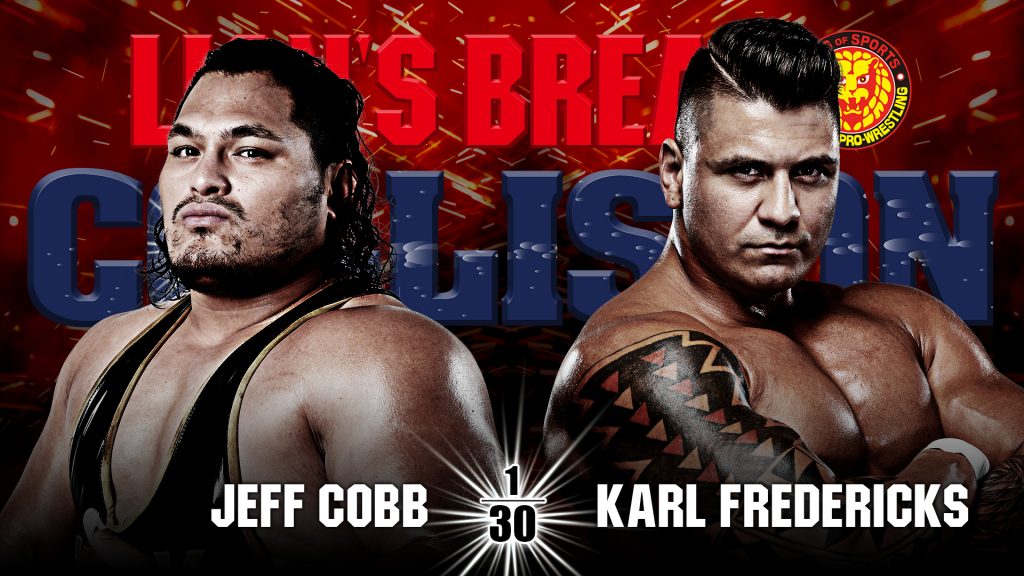 Muzza here with another weekly preview for Lion’s Break Collision. This week we have a special edition of the show that will feature four matches.

“Filthy” Tom Lawlor made a big impact on his debut beating Rocky Romero last week. This week Filthy will take on Alex Coughlin. I think Coughlin is a really good opponent for Lawlor. Coughlin is no slouch when it comes to grappling being trained by not only Katsuyori Shibata but also Josh Barnett. With the grappling badass that Tom Lawlor is, this will certainly be a match to watch out for. Don’t expect this to be easy for Lawlor as Coughlin is still waiting for his win on these shows following a draw against Connors on episode one. This match should be a hard-hitting affair and certainly a match that could be the match of the night.

The next match features two non-LA Dojo wrestlers facing off as Misterioso takes on Danny Limelight. Both men are coming off defeats. Limelight lost in the main event of episode two to TJP while Misterioso lost a tag team match on episode three. Misterioso reminds me of a Lucha Scott Steiner (maybe cause of the chain mail on his mask during his entrance) and also has the experience advantage over Limelight. This match will be an interesting style match up with both men badly needing a win.

Rocky Romero and Rust Taylor vs. TJP and Clark Connors

Also in this episode, we’ll see CHAOS’ True Leader Rocky Romero team with Rust Taylor against two generations of LA Dojo boys in TJP and Clark Connors. Romero has had it rough on these Lion Break’s shows. He took the pinfall in the main event tag match in episode one and a loss to Tom Lawlor on episode three. Rocky will be looking to get his first win by teaming up with the successful Rust Taylor.

TJP and Clark Connors are a very experienced tandem. They teamed up for the 2019 Super Junior Tag League, the New Beginning In USA tour, and the Fighting Spirit Unleashed USA tour. On the other hand, this will be the first time Romero and Taylor are teaming. TJP is on a two-match winning streak. He was a part of the winning tag team on episode one’s main event and won on night two against the aforementioned Danny Limelight. Overall this should be a fun tag match to watch.

The main event features a feud that has been build up through the past three episodes of Lion’s Break Collision. The former NEVER Openweight champion Jeff Cobb takes on the 2019 Young Lion Cup winner Karl Fredericks. This rivalry started in episode one where Fredericks had a shoving match with Cobb after their tag match. The following week Cobb had an interview with Kevin Kelly where he talked about Karl Fredericks and his lack of respect. Cobb stated he would get revenge on Fredericks when he least expected. Cobb followed up on that promise in episode three. Following Fredericks winning another tag match, Cobb came out and attacked Karl and tag partner Clark Connors which all leads to this match.

Cobb has had some good luck recently during the New Beginning Tour in USA with wins over Lance Archer, Satoshi Kojima, Alex Zayne, and Ren Narita. Fredericks has not lost yet on Lion’s Break Collision shows. This should be a fun hoss fight with two guys who are also surprisingly athletic. This very well could be the best match of the 4 episodes. Let’s hope it lives up to the hype.