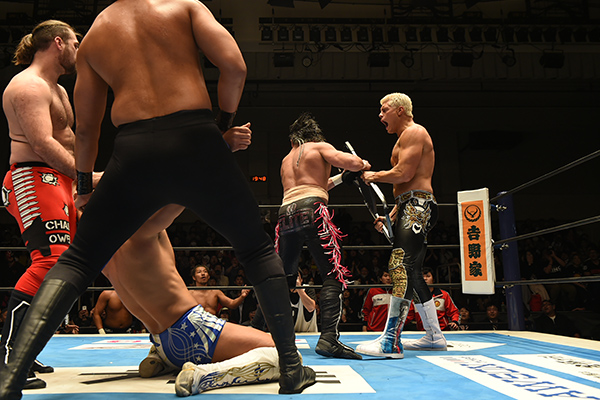 The show opens with highlights of the finish of the NEVER Openweight Six Man Tag Team Titles match.

Just as we all were beginning to think that maybe this game of “hot potato” with the six-man titles was over (LIJ were able to hang on to the straps for seven months), the Bullet Club team of Bad Luck Fale and The Guerrillas of Destiny won back their titles from Chaos they had just lost the night before at Wrestle Kingdom 12 in a gauntlet match.

Next came a ten man tag team match featuring The Bullet Club (Cody, Marty Scurll, Yujiro Takahashi, Chase Owens, and Leo Tonga with Brandi Rhodes at ringside) going up against Taguchi Japan (Ryusuke Taguchi, Kushida, Juice Robinson, David Finlay, and Kota Ibushi). If we are being completely honest here, even though this was a solid match with good in-ring action, it was simply here to be the setup for the in-ring segment that immediately followed.

After the match, Cody put the boots to Kota Ibushi before stopping to give Juice a crossroads. As Leo Tonga holds Ibushi down (which probably wasn’t necessary), Cody decides to retrieve a steel chair.

Marty Scurll attempts to stop Cody but is pushed out of the way for his troubles.

Chase Owens and Tonga hold Ibushi in the middle of the room.  Just as Cody is about to lay waste to him, you hear a fan pop, and suddenly THE CLEANER HITS THE RING! Kenny Omega saves the day. He grabs the chair out of Cody’s hands and tosses it, which leads to Omega and Rhodes going face-to-face. As the dust clears, Kenny grabs a microphone.

Omega describes a Bullet Club that is fractured, a stable struggling to stay true to one leader. He calls to the ring the one man he believes can help the Club return to their A-game… Switchblade Jay White.

A confused Switchblade makes his way to the ring. As Omega offers him a BC shirt, he looks to question what he should do. He listened to the crowd, and then seemingly against the crowd’s wishes, donned the Bullet Club shirt.

After the two embraced in front of the shocked crowd, White makes his cutthroat gesture to the crowd before hitting Omega with a blade runner. He begins taunting Omega, as he lay motionless, before hightailing it out of there as several members of the Bullet Club hit the ring.

During a backstage promo, White talks directly to The Cleaner, reminding him that the two spent time together when White was a young boy. He goes on to accuse Omega of only offering him a spot in the Club because he is afraid that White is going to “tear down everything” he has built over the last few years.

I’ll be honest, I don’t know why the show did not end on this segment, but it didn’t. Now, the match that followed was NOT a bad match. It actually was a good match, BUT the Bullet Club is your draw. The Club’s turmoil is what everyone is talking about right now.

Next, we get a “Special Eight Man Tag Team Match.”

A very well worked match all the way around. Since it is no secret that War Machine is leaving for NXT, the finish of the match seemed to be known before the bell even rang.

KES got the win for their team by pinning Hanson following a Killer Bomb.

After the match, Suzuki rolled Hiroshi Tanahashi back into the ring and attacked Tanahashi’s knee.

It was an entertaining show all around. It began new storylines for the New Year, Omega/White and Suzuki/Tanahashi in this episode.

I hope you enjoyed my second-ever article. I’m still learning about my new career in journalism, and I welcome any feedback. Please feel free to follow me on Twitter, @FoxThePodcaster, and look for my new wrestling podcast morning show, Good Brothers Wrestling Podcast,” which will be premiering later this week.