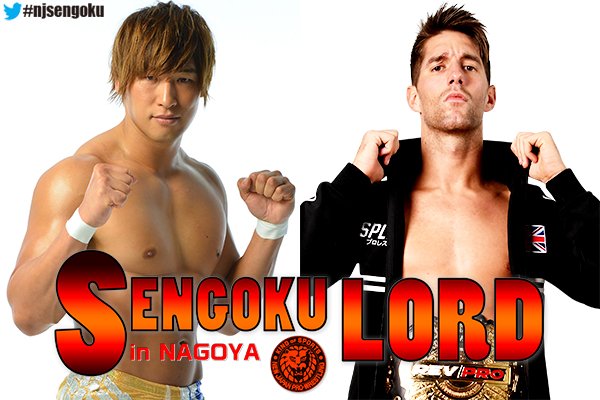 This match will hopefully give each Young Lion a chance to show their abilities to the fans, Umino and Narita have been getting big singles matches as of recent with Narita getting a match with Scurll while Umino has had some good matches with Shingo, ZSJ and a first round match against Tanahashi in the New Japan Cup. On the other hand, Tsuji and Uemura are hoping to make an impact and would love to beat their older fellow young lions.

The story seems to be leading to a Road To Wrestling Dontaku show where Liger, Tiger Mask, and Taguchi Take on Suzuki, El Desperado and Yoshinobu Kanemaru for Liger’s 30th Anniversary Match. Expect a solid match and don’t be surprised to see Suzuki-Gun jump the bell as usual.

This is a preview for future title matches during the tour with M.V.P Challenging G.O.D for the tag belts while Ishimori hopes to reclaim the junior title from Dragon Lee. With Yano and Makabe back together (former tag champs) they will hope to get a win to get an edge on Tama Tonga and Tanga Loa. Dragon Lee and Taiji Ishimori in a singles match has me very excited. Expect an overall strong match with the usual Yano Shenanigans.

An intriguing match since we don’t usually get many special singles matches in New Japan. Mikey Nicholls has said he is sick of Bullet Club saying they can go to hell. Nicholls already has a singles victory over a Bullet Club Member in HIKULEO during the New Japan Cup. Nicholls now moves on to Chase Owens who has recently lost a title match to Juice Robinson. This match will be used as a chance for New Japan fans to get more used to Mikey Nicholls (much to the dismay of Jeremy Donovan).

Prediction: Mickey Nicholls picks up the win over Chase

This is a preview to the Main Event of Hi No Kuni where Goto will face Jay White. This is also a preview for Taguchi’s big match coming up during the Road to Dontaku tour where he, Makabe and Yano defend the NEVER Six-Man Belts against G.O.D and HIKULEO. This should have a decent showing for all four guys and give HIKULEO a small time in the spotlight in what should be an overall decent match.

Prediction: Goto and Taguchi pick up the win with Goto Pinning HIKULEO

With previews to three big matches on this tour, this match has the capability to be a banger L.I.J have always been known to work better as a unit in these types of matches due to their small amount of members in their stable. But don’t Leave CHAOS out of this. All their guys on this team are solid wrestlers (YOSHI-HASHI less so but still decent).

Prediction: CHAOS pick up the win with Ishii Pinning BUSHI

Juice’s US Title Reign has been disappointing and unfortunate to say the least. Since winning the belt from Jay White he has had a poor G1 in terms of results, lost the belt to Cody at San Francisco, finally got his rematch at WrestleKingdom where his match was not great (mainly due to Cody being Injured), had a decent match against Beretta but was overshadowed by the Visa Issue and had an okay title match against Chase Owens. Unlike his last two title challengers (whom I would consider lower-midcarders for New Japan) Fale is a slightly bigger star in New Japan being a former Intercontinental Champion and 3x NEVER Six Man Tag Champ. Fale while not the greatest worker, when motivated and with the right opponent can have a good match. Whether Juice is the right opponent we will have to wait and see, but I hope we get a good match out of this.

Golden Star!!!!!! This is Ibushi and Zack’s fifth singles meeting with them tied at 2-2 with Kota winning both matches in the G1 and ZSJ winning his in the NJC.

This match I cannot wait for! I’m a big fan of both guys. With Ibushi finally winning the gold that his heroes won (Tanahashi and Nakamura) as well as Ibushi finally signing a full-time contract with NJPW, I hope this leads to a long title reign but Zack is no easy opponent. New Japan has shown some interest in Zack with him tapping out guys like Tanahashi twice, Naito, Ishii, and Ibushi himself. Will Ibushi manage to get his first title defense? Or will Zack Sabre Time be too much and make him JUST TAP OUT?!

And that’s all folks hope you enjoyed and I’ll see you next time. ICHIBAN!