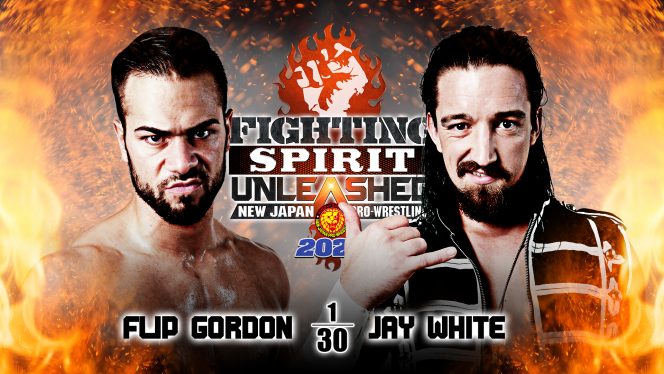 Muzza here with a preview of Night One of Fighting Spirit Unleashed. 4 Matches, 3 Singles Matches, 2 Former Villain Enterprise vs Bullet Club members, and a former IWGP World Heavyweight Champion. Let’s get into it.

Fred Rosser and Alex Zayne vs. Clark Connors and The DKC

The first match has the NJPW Debut of Fred Rosser or as most people know him as former WWE Tag Team Champion Darren Young. My overall thoughts are while he’s a known name it’s not a huge big move. He will more than likely just be another midcard talent to add to the NJPW USA Roste.

He teams with Alex Zayne who will want to get back onto winning ways after losing his Strong Debut in a 6-man tag match. They take on Clark Connors who has struggled recently with getting wins and The DKC who is still looking for his first New Japan win with him being 0-3 in New Japan. This should be a fun opener and a chance to see what Fred Rosser can do in 2020.

Prediction: Fred Rosser and Alex Zayne gets the win.

The next match features The Alpha of the LA Dojo taking on Misterioso. This match had a preview 8-man tag match where these two went at it. Now we get the match. Karl Fredericks has struggled to say the least since evolving out of the Young Lion phase. He started strong on Lions Break Collison episode 1 and 3 with two tag victories. But then lost his last three matches (loses to Jeff Cobb, KENTA, and the 8-Man Tag Match).

Misterioso meanwhile has done the opposite with a singles victory over Danny Limelight at Lions Break Collision Episode 4 and two tag team victories on Strong. Fredericks is someone I have very much enjoyed. Misterioso is good and I fully believe that the match between the two should be a fun match.

The semi-main event sees Brody King taking on HIKULEO. HIKULEO made his return from Excursion at the New Japan Cup USA Final attacking Brody King and Flip Gordon. HIKULEO has been on an excursion at RevPro and from what I’ve heard improved a lot from the early days. This is gonna be a huge hoss fight between 2 big men and should be a fun match to watch. Brody King will be needing a win following a loss to Tama Tonga in the New Japan Cup. A HIKULEO win here would show where he stands in the New Japan USA Roster.

The main event features the “Mercenary” Flip Gordon taking on “Switchblade” Jay White. This match came about following a Tag Team match where Flip Gordon and Brody King defeated Jay White and Chase Owens. Following this, a returning HIKULEO attacked Flip and Brody. This is a big-time match but out of kayfabe, you could say the face/heel dynamic is the opposite due to Flip Gordon’s tweets,

Despite all that this is should be a really good match, both are great performers. Flip Gordon has changed his style dramatically from when we last saw him in Japan with a more grounded style. Jay White, especially when he is not full-on cheating and with no Gedo by his side could see a more interesting Jay White match.

That’s it for me. I’ll be back next week for with a preview of Fighting Spirit Unleashed Night Two.