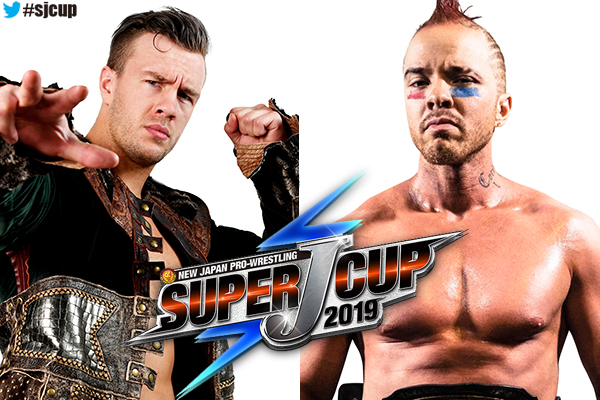 I’m back at it in the hot seat (no not the Electric chair that Sami Zayn once used) and we got a Super J Cup to review. So with that let’s have a look at Night One of the Super J Cup.

Our first match sees the Legendary Jushin Thunder team with LA Young Lion Karl Fredericks to take on Young Lions Shota Umino and Ren Narita. This should be a fine start to the show and with Liger there should get the crowd pumped up for a good show.

Our first match of the Super J-Cup sees Veteran Rocky Romero take on CMLL Representative Soberano Jr. This is a first time match between these two. Rocky has wrestled in CMLL before in 03/04 holding the CMLL World Super Lightweight championship (now just the World Lightweight championship now held by NJPW’s own Hirai Kawato). Soberano Jr was last seen in NJPW at Fantastica Mania but also competed in Super Junior Tag League in 2018 teaming with Volador Jr. Expect a fun match with Rocky showing everyone his run in BOSJ was not a fluke.

Our next match sees LA Young Lion Clark Connors take on former WWE Cruiserweight Champion TJP (a.k.a TJ Perkins). For long-time New Japan viewers, TJP is no stranger. He competed in NJPW from 2002-2005 as part of the original LA Dojo and competed in the 2004 Young Lion’s Cup picking up wins against YOSHITATSU and Hirooki Goto. He also competed in the 2011 BOSJ finishing with 6 points beating Jado, Taichi and Davey Richards. Clark Connors has had a good showing in multi-man tag matches during the G1 and this will be another chance to show what he can do against a well-known veteran.

Next match sees the Second CMLL Rep Caristico take on BUSHI. Caristico is still fairly new to NJPW fans but is known as the former Sin Cara in WWE. He was apart of the Fantastica Mania tour where he had a solid singles match against Volador Jr. As for BUSHI he has been in the background since BOSJ and will want to get back into the limelight by doing well in this tournament.

Prediction: Caristico picks up the win

Our next match sees one-third of the NEVER Openweight Six-Man Tag Team Champions “The Coach” Ryusuke Taguchi take on “The Octopus” Jonathan Gresham. These two have never faced off in a singles match but they have faced off during RevPro’s British Super J-Cup in a six-man tag match where Gresham’s team won. this match should be a very technical affair as Taguchi despite his comedy character is a good wrestler and Gresham is well known for being more technical than high flyer.

Prediction Taguchi picks up the Win

Our next match sees CHAOS’s newest member Robbie Eagles going one on one with former Bullet Club stablemate and one half of the IWGP Junior Heavyweight Tag Champs El Phantasmo. This is their second singles match with Phantasmo winning at this years BOSJ. Expect this one to be a banger with a lot of heat into it with Eagles ditching Bullet Club for CHAOS. Can Eagles get his win back and ruin Phantasmo’s chance of winning or will the HEAD BANGA cheat his way to victory?

Oh boy, this match is one I cannot wait for. These two have never faced off in singles match but they have faced off in 2018 at the CEO x NJPW show where Dragon Lee and Taguchi beat Roppongi 3K. This match should be a banger. I have always been a huge fan of YOH (I prefer YOH to SHO fight me) and Dragon Lee has had a great year and will want to get back in that Junior Title scene. Keep an eye on this match.

The semi-main event of night one will feature SHO taking on “The Bone Soldier” Taiji Ishimori. This is their second single’s match as they met in BOSJ this year with Ishimori picking up the W. These two also met at the Kizuna Road show where Ishimori and ELP beat Roppongi 3K to win the IWGP Junior Heavyweight Tag Titles. I think SHO finally gets his win back in a great match.

The main event is a dream match as the IWGP Junior Heavyweight Championship Will Ospreay takes on Amazing Red. I am not familiar with Amazing Red but from what I have heard he is really good. Of course, Will is amazing (no pun intended), so this match should be an absolute banger.

Prediction: Ospreay picks up the win

Who I think will win Super J-Cup:

I think Dragon Lee will win the Super J-Cup and could see this being a rematch at King Of Pro Wrestling. My next predictions will be Royal Quest so till next time see ya.