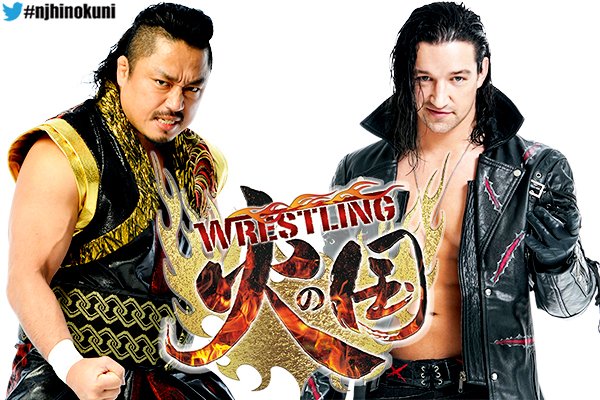 Our first match sees some Young Lions team with some more experience mid-card wrestlers in Tomoaki Honma and Toa Henare who both will be wanting to make a good impression with the up and coming G1 Climax. (But let’s be honest I don’t see either being in the G1 but you can never know with Gedo). Expect the young lions to get a good showing before being taken down by the more experienced member of the opposing team.

Our next match sees Team Taguchi Japan (if they still exist) plus YOSHI-HASHI take on Suzuki-Gun. This match is a preview for Cobb vs. Taichi for the NEVER Openweight Championship later on the tour. Expect an all-out war where Suzuki-Gun totally won’t jump before the bell and brawl to the outside (they ain’t like that).

Prediction: Suzuki-Gun pick up the win with Taichi Pinning Taguchi

Dragon Lee and Will Ospreay vs. Bullet Club (Taiji Ishimroi and HIKULEO)

Next up we have the IWGP Junior Heavyweight Champion teaming with “The Assassin” Will Ospreay to take on the “Bone Soldier” Taiji Ishimori and the Towering HIKULEO. HIKULEO is going to look like a giant compared to everyone else in the ring. This match is another preview to a title match happening later on tour as Lee will defend against Ishimori. Both these guys and Ospreay will put on an absolute clinic while HIKULEO does what he does best, which is mostly eating pinfalls.

Our first of three special singles match features “Mad” Mikey Nicholls taking on Bad Luck Fale. First off poor Jeremy Donovan. He didn’t give a damn about Nicholls vs. Owens and with this match, I worry he will give less of a damn. Anyhow, this is a first-time singles meeting between them and the storyline continues to be Nicholls having an all-out war with Bullet Club with victories over HIKULEO and Chase Owens. However this time he steps in the ring with large ‘Rogue General’ Bad Luck Fale who will be looking to get back on track following his failed attempt to win the US title from Juice. This should be a decent match with some hard hitting moves from both guys.

Prediction: Fale picks up the win

This will be the third singles match between Juice and Chase. Their record standing at 1-1, with Chase besting Juice during the New Japan Cup while Juice got the win back at the Final’s of the New Japan Cup for the US title. This will be a non-title match. I am curious as to why there are having these two face off again for the third time in the space of two months. Will Juice be able to put away Chase or will Chase be on the case and get himself another future US title shot?

Prediction: Juice picks up the win over Chase

You know the drill when it’s a multi-man tag match featuring CHAOS vs L.I.J. This match will be a preview for two matches, Okada vs. SANADA and Ishii vs. EVIL. This should be a fun and eventful match with Ishii and EVIL forearming each other to the end of time itself.

Prediction: L.I.J pick up the win with Shingo pinning SHO

Our only title match on this card features the Guerrillas Of Destiny defending against The Most Violent Players. For those who don’t know back in the day when Great Bash Heel (G.B.H for short) was a dominant stable in New Japan. As members of G.B.H, Makabe and Yano dominated the Tag Division. Then, of course, Yano betrayed Makabe and went on and formed CHAOS. With the Bullet Club tearing through everyone, bitter enemies became friends again and also led to the Most Violent Players (alongside Ryusuke Taguchi) winning the NEVER six-man tag team titles from G.O.D and Ishimori during the New Beginning tour.

This match came about during the G1 Supercard where Yano stole the Tag belts (but not the ROH tag belts cause who cares about ROH). Since then Yano and Tama have gone back and forth stealing all the tag belts. During the April 22nd show Makabe, Yano, and Taguchi retained their Six-Man Belts.

This match should be a hard-hitting affair with Yano coming in to do some comedic stuff along the way. Can M.V.P become Tag Champs once again or will G.O.D continue their dominance over the Tag Team Divison?

This match came about following Jay White losing the IWGP Heavyweight Championship to Kazuchika Okada so now Jay face’s CHAOS next best available competitor Hirooki Goto. This match you think would mainly happen so Jay White can get a victory. However, for Goto this a chance to prove he still has something to give to New Japan. For years Goto has been an upper midcarder to low tier main eventer. But recently has been slotted deep in the midcard with him mainly competing for the NEVER Openweight championship. At 39 he is meant to be in his peak but is not getting any younger so Goto will want to use this match to show everyone he still got it.