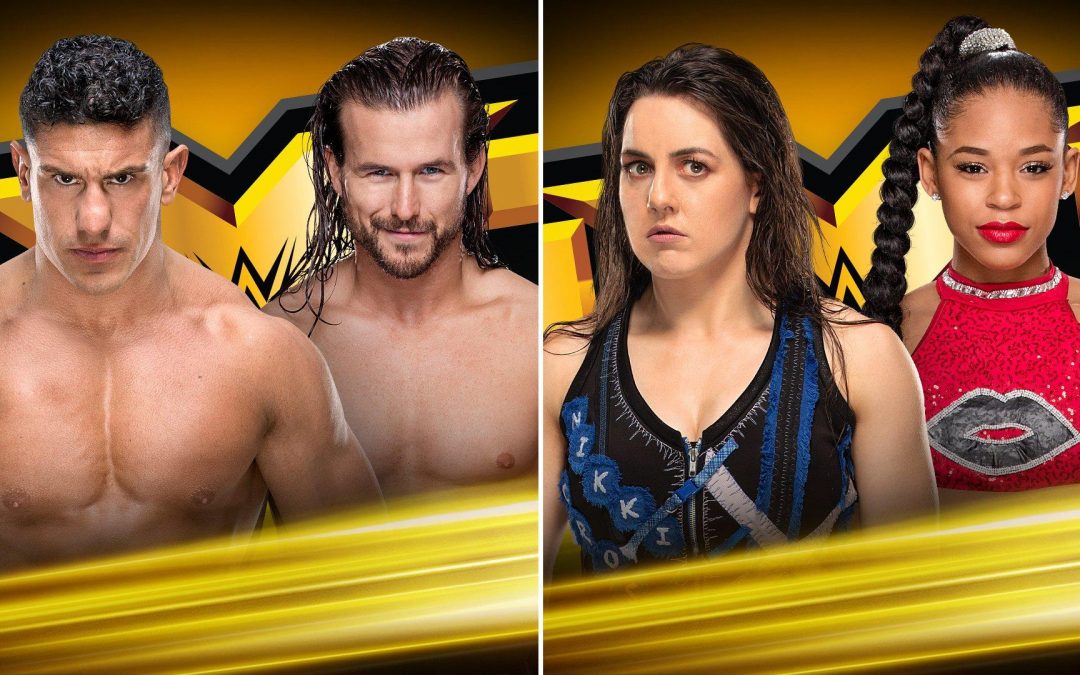 Welcome back to another edition of the premier NXT review column on all of the internet! I’m Tom Gambardella, you’re somebody who watched NXT, and now we’re gonna talk about it! So without further ado, let’s get to it!

Gargano proceeded to say he’d be better in 2019 (I have no idea how), and that he’d win a championship, before talking about the moment he and Tommaso Ciampa shared in a steel cage a couple of weeks ago. After talking about hitting a tag team finisher in the same way men talk about infidelity, Gargano turned his focus to Ricochet. Addressing him as Ric, Gargano started to call out the future of flight.

And Ric() came out to confront Gargano. First, take from this segment? Ricochet’s actually got some juice on the mic. For a guy who legitimately could NOT cut promos on the indies, it’s pretty cool to see him develop that skill in under a year in NXT.

Next came Tommaso Ciampa, who Gargano quickly told to shut up, before Aleister Black appeared on the titantron. Black called Gargano Ciampa’s “Dog of war”, which was a great cut at Gargano, and then after a brief promo, Black got a “lights out” moment. When the lights came up he was behind Ciampa.

Black and Ciampa brawled to backstage, Gargano shrugged, Ric(), and took us to commercial. This was another bit of magic from NXT’s upper card scene, 4 characters who all have with one another, each of them interacting with each other in their own way regardless of face/heel dynamics, really good stuff. Gargano vs Ric() seems to be the direction they’re going with the North American title at Takeover: Phoenix, and I, for one, would watch the hell outta that match.

On the other side of the commercial break, William Regal announced via Twitter that Kyle O’Reilly and Roderick Strong would be defending the NXT tag team titles at Takeover: Phoenix against the War Raiders. I won’t get into who I think will win that match, but I will say that it’s going to be a HELL of a match.

Next, we had Nikki Cross vs Bianca Belair in what might be Nikki Cross’ last televised match in NXT? I’ve gushed about how much star power Bianca Belair has before, and this didn’t do anything to convince me otherwise. It was a good blowoff for this feud, Bianca won with the KOD, and she looked great in this match. It wasn’t a mat classic, but let’s be real, that’s not the style of either of these two.

Bianca managed to make a standing moonsault into a heel move, and if you want an example of the “heels having stuff that pops crowds” that I mentioned a couple of weeks ago, well this is it. Bianca was still playing the heel in this match, but she brought out the spear, and that standing moonsault and those things kept the crowd interested in the match. Someday, maybe against Shayna Baszler, Bianca is gonna break out the 450 that we saw in a video not too long ago. And when that happens all of our jaws are gonna drop. Until then, here’s hoping they put the belt on her in Phoenix.

And in action tonight was the team of Marcel Barthel and former Evolve champion Fabian Aichner. Apparently, this team formed on NXT UK and has been feuding with Flash Morgan Webster.

They got a jobber match here, which indicates to me that they’ll get some sort of push, and I’m all for that. Aichner has long been an “If they give him something” all-star, and Barthel hasn’t been far behind. Of course, they will have to get some sort of character beyond, as James Boyd put it, “Low budget heel Lorcan & Burch”, but if they can do that this team just might work. The jobbers got a surprising amount of offense in this match, but they still took the L after a powerbomb-bridging German suplex combo from Aichner & Barthel. This team has potential, maybe not tag team champion potential but potential nonetheless. If nothing else, I’m excited to see where NXT takes them.

Before the main event, we got a promo from Keith Lee(!) talking about the Matt Riddle vs Kassius Ohno feud. And it turned pretty quickly into a KEITH LEE VS KASSIUS OHNO MATCH on NXT TV next week! I think Ohno vs Riddle is going to be a takeover match in Phoenix, which means Ohno probably wins this one, but if nothing else I’m excited to see Lee & Ohno in the same ring.

Finally, we had EC3 vs Adam Cole in what was most likely EC3’s last NXT match, seeing as the one percenter debuted on main event this week. While I’m a big fan of both guys the real MVP of this match was Bobby Fish yelling stuff at ringside. God, I’d missed that. Cole won the match after EC3 got most of the offense, Undisputed Era interference really came in handy here.

After the match, an Undisputed Era beatdown of EC3 was interrupted by the War Raiders. Fresh off the announcement that they’d be challenging for the tag team titles, the war raiders seemed to want a piece of Undisputed Era ASAP. This felt like the “let’s heat them up before their title win” segment for the War Raiders. I’m sure they’ll get even more opportunities to build up before Takeover, but I’ll be honest: I’m gonna be bummed out if this Undisputed Era run ends. for my money they’re the best NXT tag team since The Revival, and if they lose the tag team titles that usually means their days are numbered in NXT.

That wrapped up this week’s episode of NXT, next week we get the limitless Keith lee against Kassius Ohno. Til then, thanks for reading!