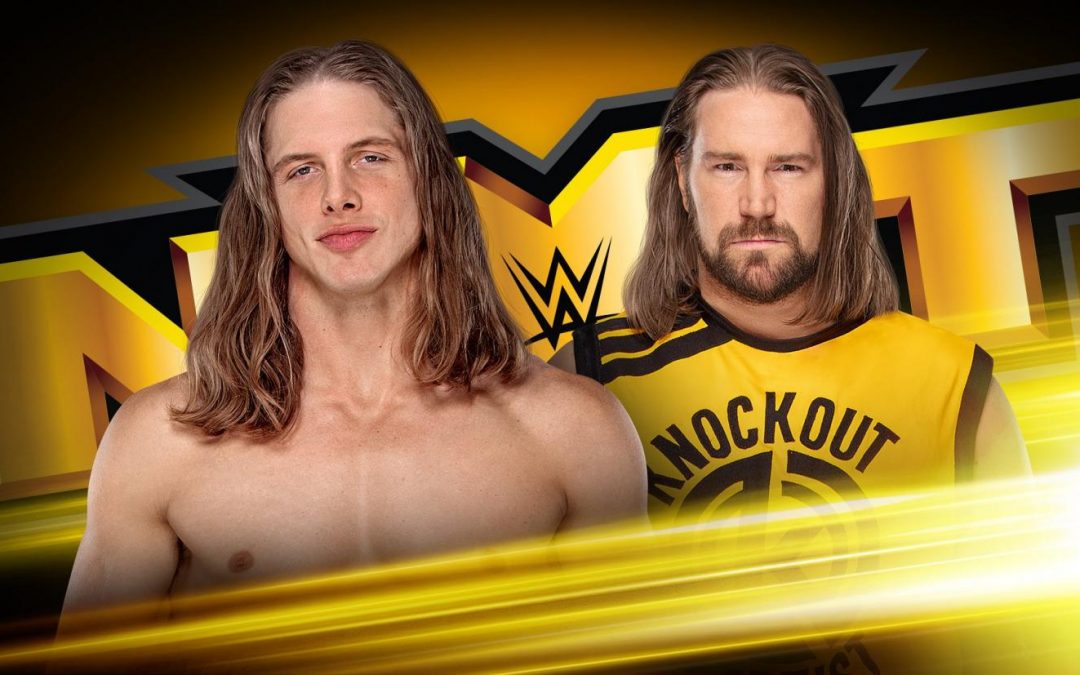 What’s readers, welcome back to another edition of the most electrifying NXT review to exist on this or any site. This week we got a recap of the year that was in NXT, with highlights from some of the best matches and feuds of the year.

While there was a ton of great content in there I’m not really going to go over those highlight packages. You all know how great NXT was in 2018, I gush about it in every column I write, and if you want to relieve it go back and rewatch your favorite matches on the WWE Network, available for the low price of $9.99 month.

The only new match we got tonight in a extravaganza was Matt Riddle vs Kassius Ohno. Riddle was a star the second he walked into NXT, but that clearly hasn’t stopped Ohno from working his ass off to get the King of Bros over. This match was very , Ohno landed some of the stiffest sentons I’ve ever seen.

Post-match Ohno spent so much time moping around like a sad puppy that I thought it might’ve been his last match, then I thought he might turn babyface when he went into the ring, knelt down, and offered a fist bump to Riddle. But what we got instead was a beatdown from Ohno, indicating that these two are very much not done with each other.

This match and what happened after it felt like a microcosm of Ohno’s NXT run; he shows us how good he is time and time again, but ultimately the work is to build up someone else. I’m hoping these two get a match at Takeover Phoenix because a longer match between them would surely tear the roof of the place.

The second thing we got on this episode was the announcement of NXT’s year-end award nominees. Last year the winners were announced on the Takeover: Philly pre-show, so I’m assuming they’ll be announced in Phoenix this year. Below are the Nominees along with who I think should win.

Future Star of the Year

Who Should Win: Honestly Io Shirai SHOULD win this award. She’s one of the top 3 women’s wrestlers on the planet, and her work in the Mae Young Classic showed that, but I do wonder if she’ll be hurt in the voting here by not being featured on NXT TV as heavily as people like Riddle or Mia Yim. I don’t doubt that Io will get a run at the top of the NXT Women’s division, the only question is when that happens.

Who Will Win: My money is on Matt Riddle for this one, he’s the biggest name on this list and already has a takeover and a TV main event under his belt. Additionally, not that this should factor into an NXT award but I feel like it’s worth mentioning, Riddle has the highest WWE ceiling of anyone on this list.

Breakout Star Of The Year

Who Should Win: I’m taking out Ricochet right off the bat because (I’m willing to bet) half of NXT’s audience already knew who he was before he signed. With him out I think the most likely candidate to win become the War Raiders or Rhea Ripley, seeing as War Raiders were on the winning team in War Games and Ripley won the NXT UK Women’s title. Honestly, I think it should be Bianca Belair because (a) I don’t watch NXT UK so I can’t speak on Rhea Ripley’s work, and (b) she’s the person on this list whose stock I think rose the most this year. We already knew who Ricochet, EC3 and War Raiders were, Dakota Kai spent most of this year getting bullied by Shayna Baszler. NXT brass obviously a lot in Lacey Evans, and while she did improve substantially this year I don’t think she ever got to the point where she could be a realistic Women’s Champion. Bianca Belair is at that level.

Who Will Win: Ricochet. It’s no secret that he’s getting a rocket strapped to him, and this award would be a nice feather in his cap.

Tag Team Of The Year

Who Should Win: Look, I love Lorcan & Burch as much as the next guy, probably even more than that next guy, but there are only 2 teams that even have a case here. Undisputed Era and Moustache Mountain had possibly the best tag team feud in NXT history this year, everyone else gets a “Thanks for playing”. Of those two teams, only one of them started and ended the year as champions. And on top of that, Undisputed Era was simply part of a lot more great matches than Moustache Mountain. From The Lorcan & Burch match in Chicago to War Games 2, to giving Heavy Machinery their best match, The Undisputed Era was THE tag team in NXT this year, so they should win this one.

Who Will Win: The Undisputed Era. I can’t see the justification for giving this award to any other team, so hats off to Kyle O’Reilly, Roderick Strong, and Bobby Fish.

Male Competitor Of The Year

Who Should Win: Look, this is a murderer’s row of awesome wrestlers. Everyone on this list had a fantastic year. But c’mon. Gargano is the ace of NXT and nobody else comes close to being Male Competitor of the year. Pete Dunne was a major part of not one but TWO NXTs? Doesn’t matter, can’t touch Johnny Wrestling. Ciampa came back to have one of the better heel runs in recent memory? hmm. Cute. Still wasn’t Gargano. Johnny Gargano, Johnny Takeover, Johnny Franchise.

Who Will Win: Johnny Gargano. See above. While we’re at it, I’m gonna say right now that Gargano should and will win overall superstar of the year.

Female Competitor of the Year

Who Should Win: Shayna Baszler. Maybe Kairi is better in-ring, maybe Ember Moon is too, but from January on Shayna Baszler was the centerpiece of this division. She played her role perfectly, carrying the NXT Women’s title while other wrestlers built themselves up, and for that, I think she deserves Female Competitor of the year.

Who Will Win: Probably Kairi, which I have no problem with. Kairi was the top babyface in NXT’s women’s division all year long, and the trilogy between her and Shayna Baszler was so good that I wouldn’t mind either of them winning it. Having been in the building for their match at Takeover Brooklyn 4 I can say that that was even more of a pure babyface-heel dynamic than Gargano vs Ciampa, which speaks to how good Kairi and Shayna are at what they do.

Rivalry Of The Year

Who Should Win: This was the toughest award for me to pick because of how high I was on the Undisputed Era vs Moustache Mountain feud, but in the end, there’s only one correct answer here. Gargano vs Ciampa vs Black might be the best WWE rivalry since Cena vs Punk when all is said and done, when you think of just how far back it stretches (for christ’s sake Gargano & Ciampa were in the 2015 Dusty Classic, they had a match against Tyler Breeze and Bull Dempsey), and then think about how it’s STILL GOING? It’s a . Gargano vs Ciampa vs Black is the franchise, it’s the gold standard, and not even a dynamite feud like Moustache Mountain vs Undisputed Era can top it.

Who Will Win: Gargano vs Ciampa vs Black. Considering the fact that this story isn’t over yet, I imagine NXT will want to keep the hype up for its conclusion, and that’s on top of the fact that this WAS the feud of the year in NXT. These 3 defined NXT in 2018, Black and Ciampa were 2 of the 3 people to hold the NXT championship, Gargano vs Ciampa main 3 Takeovers, Gargano main a 4th against Almas, and the “Who attacked Aleister Black” storyline became the center point of NXT in the fall. Even at War Games, where none of , they were involved in the 2 best matches of the night. Gargano, Ciampa, and Black hit a level in 2018 that nobody in NXT had ever hit before, and for that, they deserve feud of the year.

Match Of The Year

Who Should Win: Jeez that was a lot of matches. If Ricochet and Pete Dunne, or even Ricochet vs Pete Dunne Vs Adam Cole got a full Takeover time slot and a clean finish, there’s little doubt in my mind that it’d be the NXT match of the year, but unfortunately, neither of those matches did. Additionally, there’s a class of matches on this list that would’ve been a serious match of the year contenders in any other year. Gargano vs Almas, Undisputed Era vs Moustache Mountain, The North American Championship Ladder Match, and Ricochet vs Dunne (even in its abbreviated state) all would’ve been of the year contenders if Gargano vs Ciampa didn’t exist. Gargano locking in the STF with a knee brace was the biggest moment in wrestling this year, the match that led up to it was an epic, and what ultimately put it above Gargano vs Almas for me is that the right person won. If Gargano wins the title in Philly Gargano vs Almas becomes my match of the year, but because he didn’t win it I have to go with Gargano vs Ciampa.

Who Will Win: Gargano vs Almas. The only knock on this match is that Gargano didn’t win it, but I don’t think WWE sees that as an issue. This match was honestly perfect in every way except the finish, so I can’t blame anyone for voting for it, it just wouldn’t be my first choice.