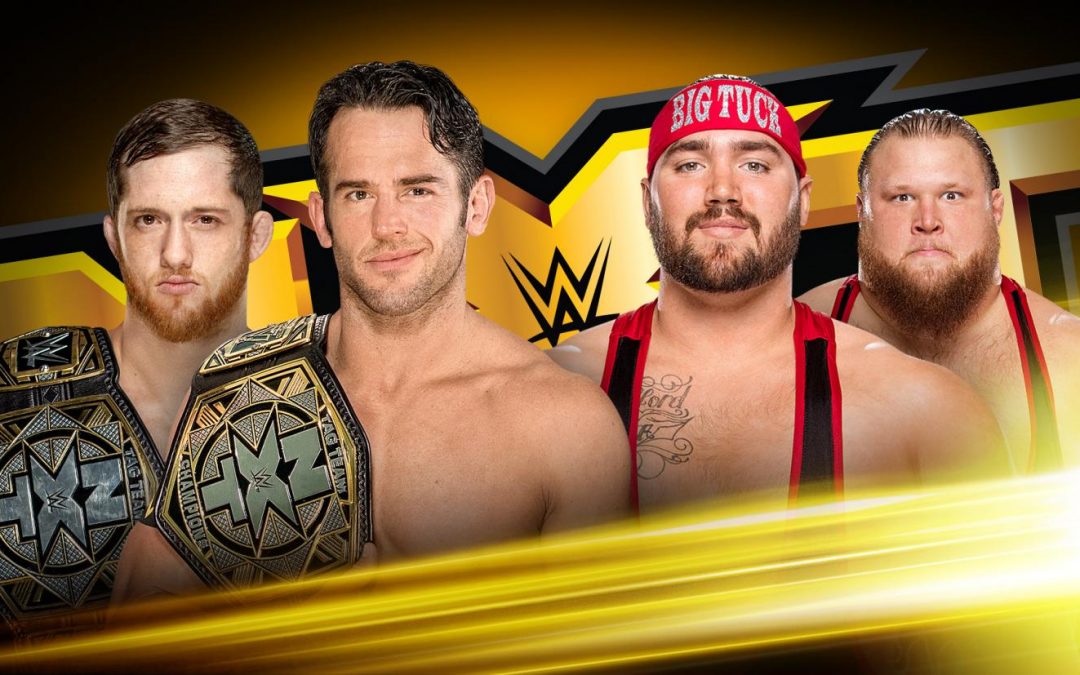 What’s up NXT fans, if you weren’t able to catch NXT this week, or if you were and want to see my thoughts on it, this NXT review is for you! So read on, we got a tag team title match in this week’s main event!

This week’s episode started with a Fatal 4-Way match between Io Shirai, Bianca Belair, Lacey Evans, and Mia Yim. The winner of the match gets to face Shayna Baszler for the NXT women’s title at Takeover Phoenix.

The main thing I noticed from this match was : Lacey Evans really doesn’t have anything in her arsenal to pop the crowd. And I’m sure there are people who’ll say “oh well she’s a heel, she’s not supposed to pop the crowd”, so let me clarify: She doesn’t do much in the ring to get or keep people invested in the match. She got the most offense this and the least reaction. Even when she hit the “woman’s right”, the announce team was losing their collective shit selling that move while Full Sail sat on its hands.

Bianca Belair was playing the heel in this match and she got the loudest pop of anyone in it when she hair-whipped Io. To bring in another example, Shayna Baszler got a huge crowd reaction at Takeover Brooklyn 4 for wrenching the hell out of Kairi Sane’s ankle. Sure, heels aren’t in there to pop the crowd, but that doesn’t mean they shouldn’t be special. Bianca Belair did stuff in this match that made her look special, Lacey Evans hasn’t done that in any match.

So Bianca Belair is getting the women’s title shot at Takeover Phoenix, she pinned Lacey Evans after hitting the KOD, and I couldn’t be happier. Lacey Evans is going to the main roster soon, and it’s way too soon for Mia or Io to be challenging for the title, but the reality is that it’s Bianca’s time. She doesn’t have a ton of experience, she hasn’t put on any really long matches, but she’s clearly special. So let’s hope she gets the title off Shayna and becomes the first Performance Center trainee since Charlotte to win the NXT women’s title.

Next we got Jaxson Ryker in a squash match, and the first thing I have to say as a result of this match is that I’m sorry. I think I called the forgotten sons “Anthem Standy Sanity” when they debuted, and I’ll admit, that might’ve been a bit too far. Sanity was really good in NXT, it was unfair to compare them to the wet fart of a faction that is the Forgotten Sons. For all the flack I gave Lacey Evans about not getting crowd reactions, Jaxson Ryker had Full Sail SILENT. I could’ve taken a nap during the taping of this match, and I almost took a nap while watching it on tv. It was that quiet.

This match highlighted something: The Forgotten Sons experiment isn’t working. They’re clearly not connecting with the crowd at Full Sail, and as a TV they didn’t connect with me. Part of the issue, I think, is that they don’t have much of a character.

They’re three jacked dudes who like to fight, but like…why? Sanity was the anti-establishment gang, Undisputed Era are the dickhead jock faction, what are the forgotten sons? Whose Sons are they? Why are they forgotten? Are they ex-military? are they just dudes who like camo? We don’t know! What we do know is that they’re not particularly interesting in-ring, which is the other issue. NXT’s audience prioritizes match quality over almost everything else, and I just can’t see the Forgotten Sons delivering good matches.

Next we had a Tommaso Ciampa promo, and like most of Ciampa’s promo work this year it was magnificent. Ciampa told us that Johnny Gargano beat Aleister Black because he listened to Ciampa’s words, and then he did something really cool: He brought up the idea of DIY “Taking over”, like they said they would when they were a tag team, with Ciampa as NXT Champion and Gargano as North American Champion.

Ciampa doesn’t care if Gargano wins the North American championship, he just knows Gargano is dangerous as a challenger for the NXT championship. Bringing up a DIY takeover was great because Ciampa knows Gargano isn’t going to team up with him. Johnny Gargano still hates Tommaso Ciampa, but Ciampa is letting Gargano know: You sank down to my level, you turned to the dark side, and now it’s bringing you closer than ever to what the “good guy” version of you wanted.

Finally we got Kyle O’Reilly and Roderick Strong vs Heavy Machinery. This might be the last time we see Heavy Machinery on NXT, and if it is I wish my favorite Saturday morning wrestling gimmick all the best on the main roster. Also Tucker Knight took a backdrop that I think was supposed to be on the apron, but that big fella landed right on the ground, so props to him for toughing out the rest of the match after what I’m sure was a nasty bump to take.

Heavy Machinery didn’t win the tag team titles here, but let’s be honest: We knew they weren’t going to. As much as I love Otis Dozovic, having him and Tucker Knight beat O’Reilly and Strong would’ve been downright stupid. Champions in NXT need to have the match quality, and Heavy Machinery, despite being worlds better than they were when they debuted, still aren’t quite there. I see them getting a No Way Jose type of push on the main roster, featured on tv for a few weeks and then mostly forgotten outside of house shows, but there’s no shame in that. At the end of the day they’ll be paid more to wrestle.

As for The Undisputed Era, I have to ask: How long are we gonna keep O’Reilly and Strong as a tag team now that Bobby Fish is healthy? O’Reilly and Strong have been incredible together, but is anyone here looking to sign up for a Bobby Fish singles run? Didn’t think so. On the other hand, I watched and enjoyed Roddy Strong as a singles wrestler months ago, and I’d love to see him in a singles role again. Strong is the best in-ring member of the Undisputed Era, let’s let him show off that skill set again. Strong vs Ricochet for the North American Title? Strong vs Matt Riddle? Strong vs Aleister Black, which I think happened once but it was before Strong turned and Joined TUE? All of these could happen! Why would we not want this!

That about wraps it up for this week’s NXT Review, as usual the black & Gold brand delivered a solid show, tune in next week for Matt Riddle vs Kassius Ohno, AKA Matt Riddle’s first actually competitive NXT match.