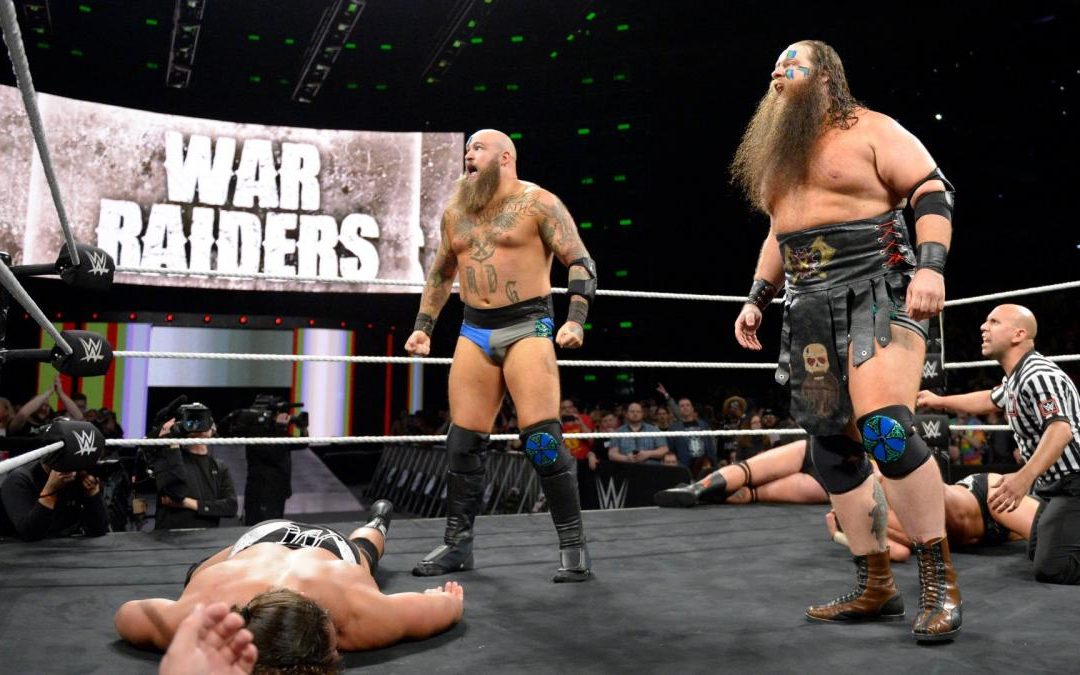 Welcome back to another illustrious edition of the most insightful and impactful weekly NXT review ever to be found on this or any other platform. Today we’re talking about last night’s episode of NXT, and last night’s episode was a special one because it featured the matches taped in the Smoothie King Center before NXT Takeover began. These matches were Lacey Evans vs Kairi Sane and Heavy Machinery vs Tino Sabatelli & Riddick Moss. Other than that, the episode was heavy on recap videos, promos shot backstage at Takeover, and videos showing who got called up to the main roster this past week. So read on if you’d like to see the (incredibly well thought out) opinions of a 19-year-old who underslept last night and overcaffeinated this morning. Trust me, they won’t be the worst wrestling takes on the internet.

The night started out with Lacey Evans vs Kairi Sane, and my first takeaway from this match was that Lacey Evans’s theme is…kind of a heater? It’s not as good as Johnny Gargano’s or even Ember Moon’s, but in its own way, it really works. leading into this match Lacey Evans had been somebody who I’d somewhat written off as a wrestler. That’s not to say that she isn’t good, but after watching the Mae Young Classic and watching weekly NXT for a while, there have been people who stood out to me more than Lacey Evans did. In this match, however, Lacey Evans started to change my opinions. She played a really good heel, and you can tell she has a solid grasp on the character she’s playing, which is something I think a lot of NXT talents are lacking. Not to short-change Kairi Sane, but frankly, we know what she can do. Evans did a really good job of getting herself over in a loss, and Kairi picked up a deserved win. With Shayna Baszler now holding the women’s belt and Ember Moon on the main roster, NXT needs established female babyfaces with some momentum. And if Kairi Sane doesn’t fit that description after this match, I don’t know who does.

After a few of those video packages that I mentioned before (Who got called up, who said what after their takeover matches, etc) we got a Heavy Machinery vs Riddick Moss & Tino Sabatelli match. Moss & Sabatelli are a team a lot of NXT fans like to bash, and while they’re not putting on 5-star classics every time they go out to have a match, it’s impossible to deny that Riddick Moss & Tino Sabatelli serve a purpose. One of the most often referenced tropes in NXT is the men’s singles “gatekeeper”, the guy who puts over other talents on their way to challenging for the NXT championship. Tye Dillinger, Andrade “Cien” Almas, Roderick Strong was also in that role for a short time, you get the idea. In a way, Moss & Sabatelli play that role for the tag team division. They put over Sanity early in Sanity’s run if I’m not mistaken, and have done the same for the Street Profits and Heavy Machinery. And after this match, it looks like either Sabatelli & Moss or Heavy Machinery will be putting over the newly debuted NXT tag team, War Raiders!

That’s right, Hanson & Rowe debuted last night by beating the piss out of both the teams in this match. It ended in a DQ, nobody won, and the burly bearded boys looked very strong. Wait, no. Heavy Machinery are still the burly bearded boys. Maybe War Raiders can be the angry facepaint fellas? I’m gonna go with that. The angry face painted fellas really looked menacing here. The one complaint I have is that they used a top rope stomp-side slam combo to finish the beatdown, and I really hope that’s not their finisher in NXT. AOP used that move, albeit not to finish matches, and Sanity used a variation of it to finish matches. The popup power slam that War Machine did in ROH and NJPW was such a cool finisher, and when Hanson follows it with a suicide dive, which he sometimes does, it’s truly a sight to behold.

That’s where we end this week’s episode of NXT. A couple of pretty good TV matches, an exciting debut, but little to no storyline development outside of that. It wasn’t nearly as good as what NXT has made us accustomed to, but for a show built off of dark matches, it really did the job.