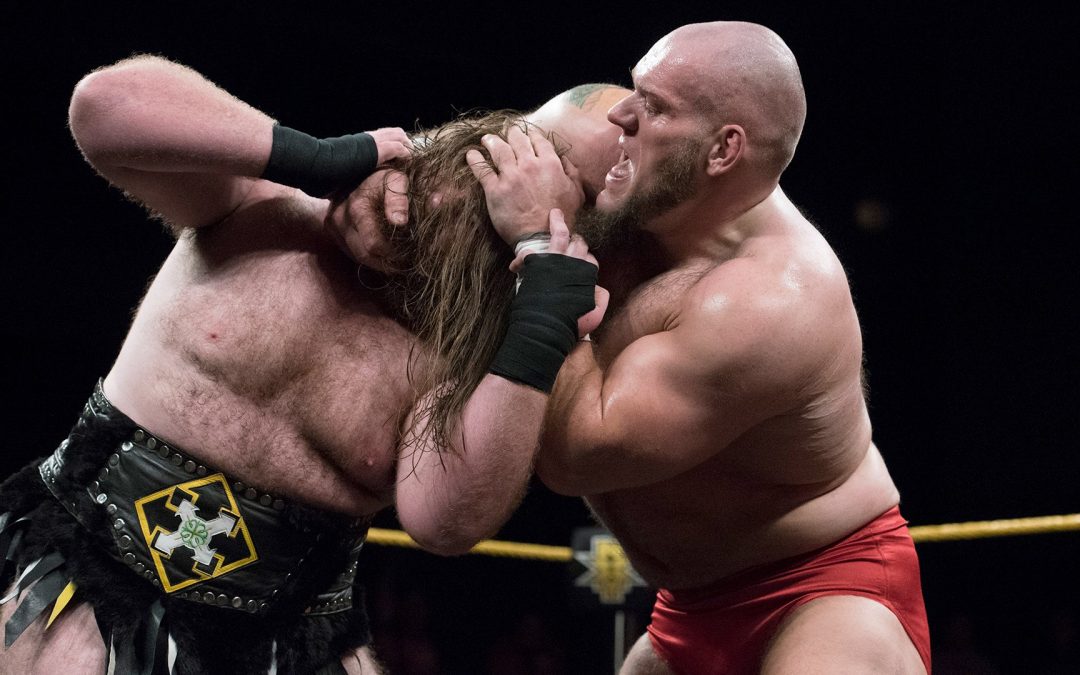 What is up, readers! I’m Tom Gambardella back with another edition of the weekly NXT review, and this week we’re talking about the go-home show for NXT Takeover: New Orleans. To start off, I’m just going to say this: How in the blue hell does NXT continue coming up with such awesome looking Takeover logos? I mean really. Takeover: Philly had what I still consider one of the best pay per view logos ever, and somehow Takeover NOLA might’ve topped it. BUT I DIGRESS. It’s obviously gonna get pretty spoiler-y from here on out, so if you don’t want to read the results from this week’s episode of NXT, well…don’t scroll down any farther. You have been warned.

So we started off the night with Charly Caruso in the Dusty Rhodes Tag Team Classic Control Room, and ol’ Chuck told us that Bobby Fish had suffered a torn ACL this past weekend at a house show, and Fish isn’t currently cleared to compete. The injury actually happened a while ago, but hey…Kayfabe, brother. Fish being injured puts the Undisputed Era in quite a bind as Adam Cole is scheduled to compete in the North American Championship Ladder Match this Saturday, and it now looks like he’ll have to pull double duty.

After that update from Charles, we got the finals of the Dusty Rhodes Tag Team Classic between The Authors Of Pain and Roderick Strong & Pete Dunne. AOP looked like monsters, like usual, in this match, but in the late stages, Strong & Dunne showed some really impressive fire in a couple of sequences where they blended each other’s singles offense into some cool tag team moves. At one point Strong lifted Akam up for an Olympic Slam-Bitter end combo that was just fantastic, and Pete Dunne working babyface was better than I ever thought it could be. Just when Strong & Dunne had AOP on the ropes, Kyle O’Reilly & Adam Cole (BAYBAY!!) hit the ring and started hitting people. The match was called a double DQ, and because of that, there would seemingly be no challenger for those tag team titles at Takeover. Pretty smart stuff from Future Sho-I mean the Undisputed Era, right?

Well, William Regal did NOT like this one bit! Regal made his entrance, announced that Cole & O’Reilly would defend the tag titles against BOTH AOP and Strong & Dunne, and the winner of that match would also be declared the winner of the 2018 Dusty Rhodes Tag Team Classic. Cole & O’Reilly were not happy, but the live crowd sure seemed to be. As someone who has been a pretty big Undisputed Era mark since they arrived in NXT (They were the first “Indie guys” whose names I knew before they showed up in NXT, so for me seeing them on tv is pretty cool), I was shocked at how enjoyable it was seeing Cole specifically get what was coming to him. He thought he could outsmart the system, but it might come back to bite him in the ass Saturday night. Is this what well-written wrestling is like? Take notes, McMahon!

A note about tonight’s show: There were multiple video packages. Not like on-screen interviews, although Lacey Evans did one of those, but promo videos. Like the ones that will air before the matches on Saturday. And without giving too much away…the Gargano vs Ciampa video package really hit me in the heart. I still popped when The Revival tapped out against DIY, and I have a strong emotional hatred for Tommaso Ciampa now. Seriously. Fuck that guy.

After a couple of video packages, Kairi Sane faced Vanessa Borne. Sane won. Not a ton to see here. I don’t love Vanessa Borne, but any match where Kairi Sane hits that elbow drop is a match I’ll tune in for. Also, I realized tonight that the vocals in Kairi’s entrance music are people saying “Yo ho” over and over again. It makes sense because, well y’know…pirate stuff, I had just never made the connection. Not since I realized that Tamina’s theme was just people saying “Tamina” have I been so shocked.

After a commercial break, Lacey Evans did an on-screen interview, and she basically called out the entire NXT women’s division here. Specifically, Evans said she’d fight Kairi Sane. So that match is happening on NXT TV next week. Evans is part of that “We stand for the anthem!” faction (their real name is the forgotten sons) with Chad Lail, Wes Blake, and Steve Cutler, and I would imagine they debut on tv sometime soon, so it’ll be interesting to see how Lacey Evans is handled in the coming weeks.

Next, we got Adam Cole and Kyle O’Reilly complaining to William Regal about the tag team match being made. Regal told Cole & O’Reilly that they have 3 options if they don’t like that match. Option 1: Cole competes in both matches. Option 2: O’Reilly competes alone. Option 3: Cole withdraws from the ladder match. Regal closed his teacher-ish lecture by saying “you’re the undisputed era, you’re smart! you’ll figure it out!” I think that could be foreshadowing. Maybe The Undisputed Era introduces a new member Saturday night? Chris “no longer Donovan” Dijak hasn’t debuted on NXT TV yet, maybe he puts on the black T-Shirt Saturday night? I don’t think that’ll be what happens, only because this feels like the point where Undisputed Era finally get what has been coming to them, but I could also see Cole losing the tag titles, screwing somebody over to win the ladder match, and coming out on tv the next week to say he’s bigger than Undisputed Era. Either way, I don’t think Cole & O’Reilly will be the only members of Undisputed Era for long. Either somebody joins, or the faction dissolves.

Finally, Lars Sullivan vs Killian Dain happened as our main event. It shouldn’t shock anyone that this match was good, and what’s more important is that it didn’t have a clear winner. Velveteen Dream hit the ring while both men were down, then Adam Cole ran down to meet him. They were met by EC3, then Lars & Dain rose from the ground. Finally, Ricochet hit the ring and did his bouncy flippy superhero pose, and the show closed with all 6 men facing off in the ring. That about wraps it up for this week’s NXT review, a full takeover preview is coming in a couple of days. Til next time y’all.