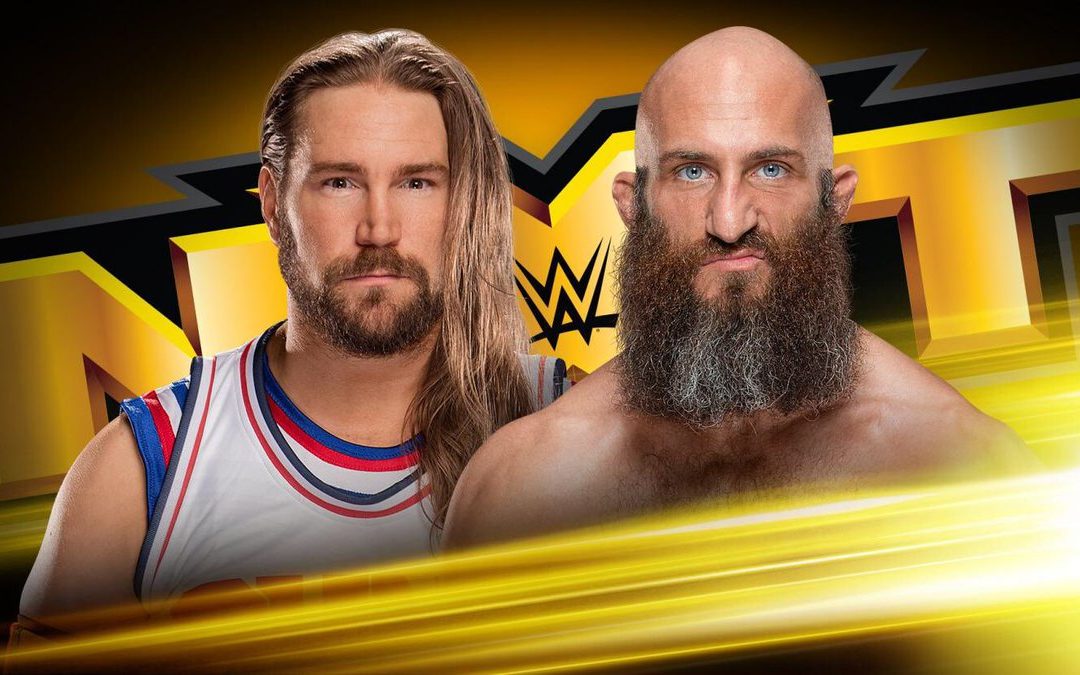 What is up, readers! It has been a few weeks since we got an NXT review, and in that time oh so much has happened. There’s a lot to recap from the past few weeks, as well as last night, so let’s get into it.

Last night’s episode started with Ricochet walking down to the ring for a promo segment. Ricochet explained that he wanted to make sure everybody was talking about him after Takeover: NOLA, and now that he did that, the NXT championship was on his mind. This statement didn’t sit well with the person who has been chirping Ricochet on Twitter for multiple months, the Velveteen Dream.

The Dream hit the ring and, not surprisingly, that’s when this segment really heated up. Dream and Ricochet started going back and forth telling each other why they didn’t deserve a shot at the title, and the segment ended with Dream looking to take a cheap shot at Ricochet that Ricochet was ready for. The chemistry between these two is really something special, (which is something I feel like I’ve said about everybody that Dream has been paired with…at some point I think it should become apparent that the Velveteen Dream is just really good) and it looks like they’re headed for a Takeover match the night before Money In The Bank.

I don’t know who would win this hypothetical matchup, although my gut says dream would need the win more. There’s an outside chance that Dream challenges Aleister Black for the title at Takeover: Brooklyn IV, and if that’s the direction NXT wants to go he should win this match they’re setting up.

Also on this episode, we got a Dakota Kai vs Vanessa Borne match. Before we get into talking about that match, weekly reminder that Vanessa Borne’s theme is sneakily one of the best themes in WWE. The match was fine, Dakota Kai won, hitting a front-flipping backstabber for the finish, and after the match, Shayna Baszler hit the ring.

Dakota Kai, naturally, looked scared out of her mind given their history, and Baszler choked out Vanessa Borne. Dakota Kai just watched it happen, then she walked back to the ring to do an interview with Cathy Kelly. The interview got interrupted by Shayna Baszler, who got in Dakota’s face.

They’re doing a really good job of establishing Shayna Baszler as a bully on NXT TV, and even though Dakota Kai kind of looks like a chump right now I trust NXT to not completely bury her. In other words, “Bayley: This is your life” would never happen on NXT TV. I could see Dakota Kai vs Shayna Baszler looking a lot like the Bobby Roode vs Roderick Strong feud when it’s all said and done. Strong didn’t beat Roode for the title, but he beat Roode clean to end their feud, and it was a great win for Strong. Similarly, I don’t know if Dakota Kai beats Shayna Baszler for the title, but I know she’ll kick Shayna Baszler in the face one day, and I’m looking forward to it.

If I remember correctly the next segment in the show was Oney Lorcan and Danny Burch talking to Pete Dunne. The thing that struck me from this segment was how much it highlighted NXT’s consistent character development. Pete Dunne has been looking like more of a tweener in the audience’s eyes recently, he wrestled pure babyface in his match with Roderick Strong on TV, but he hasn’t given the other wrestlers in NXT any reason to trust him.

One of the things I hate about main roster booking is the “Oh we’re both babyfaces now, nothing that happened when one of us was a heel matters now” trope. It’s what they’re doing right now with Reigns and Strowman, and I just don’t think it makes sense. And to NXT’s credit, they didn’t fall into that trap here. Lorcan & Burch made it clear to Dunne that they didn’t like him, they made it clear that they didn’t trust him, and Dunne made it pretty clear that he didn’t care. This alliance (The three are teaming up against Undisputed Era next week) is built on common hatred, but NXT is doing a great job of keeping it confined to that. They all hate the same people, but they aren’t suddenly best friends now.

Also, a brief note on British Strong Style. I would really love to see Tyler Bate, Trent Seven, and Pete Dunne team up in NXT, but I understand why they aren’t. If the WWE UK Show gets greenlit Pete Dunne is the top heel on there. Tyler Bate is the top face, Trent Seven is probably number 2 in the babyface rankings. Having the top 2 babyfaces on a new TV show team up with the show’s top heel is an idea that just wouldn’t make sense. Lorcan & Burch will have to do for now, and faction warfare can wait.

After that segment, we got War Raiders vs Heavy Machinery. I love Heavy Machinery, but at this point, I don’t see them winning the tag team titles. And that’s fine. Heavy Machinery can be an “opening act at a house show” team for a long time with their current gimmick, they’ll probably be crazy over with kids for their whole careers, but I don’t think they put on the quality of matches necessary to be NXT Tag Champs.

War Raiders, on the other hand, are clearly going to be big players in the tag division. I’m pretty sure AOP are done doing NXT shows, which is a shame because AOP putting over War Raiders would have been a great rub to give Hanson & Rowe. Regardless, War Raiders looked like monsters in this match. They’re not using the popup powerslam as a finisher, which kills me, but their current finisher (side slam-leg drop combo) looks good enough for me to move past it. And both guys have gotten to show off their athleticism a lot in the few matches they’ve had, which makes me happy (especially with a certain very athletic big man potentially coming to NXT).

Before the main event, we got a quick video of the Street Profits training at a basketball court saying that they want the tag team championships. I’m assuming their challenge against Kyle O’Reilly & Roderick Strong happens at Takeover the night before Money In The Bank, and if that is the case I think O’Reilly & Strong could drop the titles there.

We’ve only ever seen one team win the tag titles twice, and I’m not sure I see O’Reilly and Strong being the second team to do that. With that in mind, it seems more likely that they just retain the titles the night before Money In The Bank. If the Street Profits do win the titles at takeover I see it being a transitional run to get the titles onto War Raiders. And if that is the case I could see O’Reilly and Strong (or maybe Fish if he’s back by then) turning face to go against War Raiders. TM61 are also likely to factor into the tag title scene in the near future but I’m not sure where exactly they will fit in. Maybe the TM61 vs Street Profits rematch that I’m sure we’ll get at some point will be a #1 Contender’s match?

Last night’s main event was Kassius Ohno vs Tommaso Ciampa. Ciampa still has crazy amounts of heel heat, which is nice to see considering he lost to Gargano. I think Kassius Ohno is the world’s most overqualified jobber at this point, but I think the “player-coach” role he’s in right now fits him well. Would I like to see him win a few more matches? Yeah, sure. But the reality is Ohno isn’t there to win matches, he’s there to put people over. And he’ll maintain legitimacy because people watching NXT know how good he is.

Everyone in the audience at Full Sail knows who Chris Hero was, they know they’re watching one of the best independent wrestlers ever, and that respect he has from the audience combined with how he’s booked keeps him relevant and credible. Ciampa got the win in this match, which was the right result from a storyline standpoint. Ohno got a good amount of offense in, but Ciampa was too strong. Definitely a main event worth watching. Ciampa’s story is clearly not over in NXT, and I’m excited to see his next chapter.

And that about does it for the episode that was in NXT this week. Next week’s episode is gonna have Lorcan, Burch, and Pete Dunne vs Undisputed Era as the main event which I’m sure will be a great match.