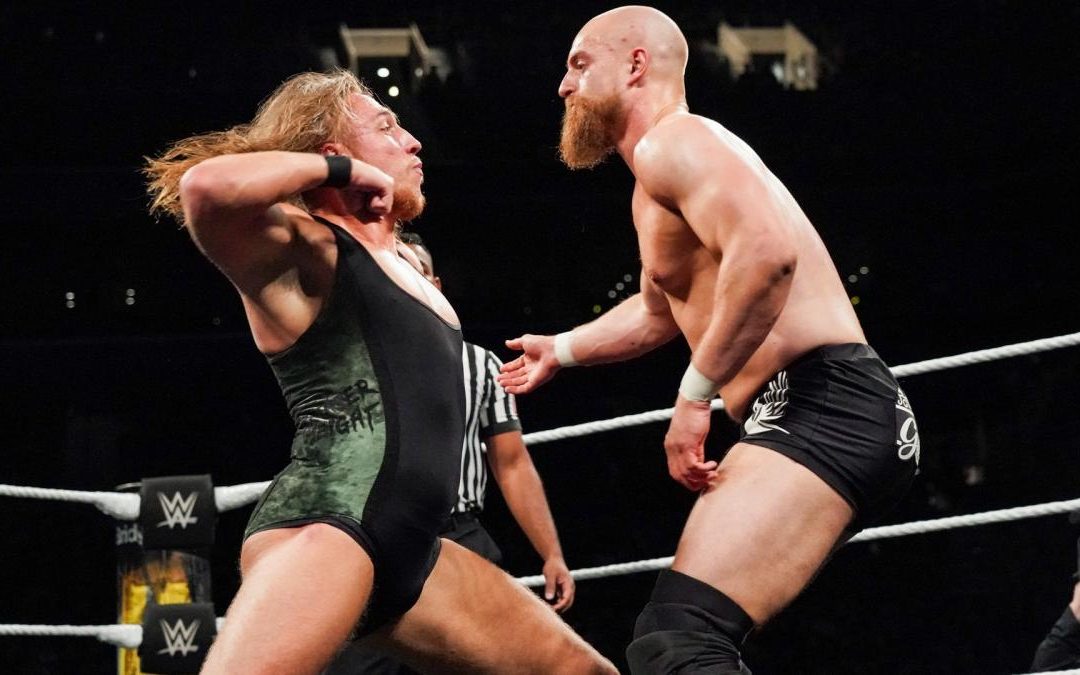 What’s up NXT fans, it’s Tom, back with another edition of the best NXT review to be found anywhere on the internet. This week’s episode of NXT featured the matches taped before Takeover Brooklyn 4, with Bianca Belair facing Deonna Purrazzo and Pete Dunne defending the UK Championship against Zack Gibson. 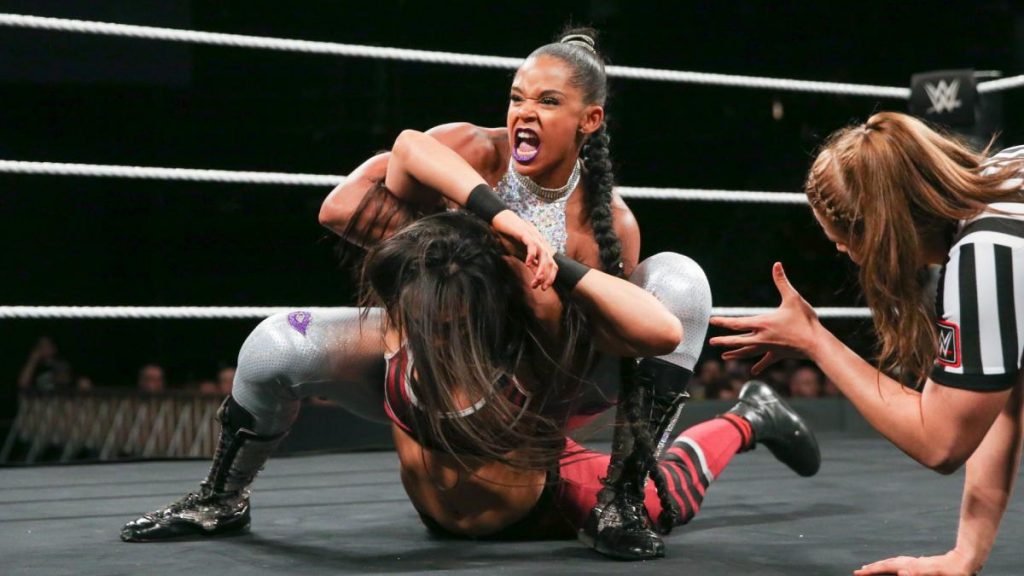 This was the first time we’d seen Deonna Purrazzo on NXT TV, or any WWE produced content for that matter because Mae Young Classic part 2 hasn’t aired yet. To be honest, we didn’t really see Deonna Purrazzoo much other than her entrance. Bianca Belair got the lion’s share of the offense and picked up the win after a torture rack facebuster. It was a short match, but I think it puts Belair in line for a women’s title shot in the near future. I think my favorite part of this match was when Belair started getting “E-S-T! E-S-T!” chants, because you could see her crack a real smile for a second. I like seeing wrestlers take in the stage that they’re on, and this is exactly what that felt like.

Promos from The Velveteen Dream, EC3, and Ricochet

After that match we got backstage promos from The Velveteen Dream and EC3, obviously, very different promos seeing as one guy won a match and the other guy lost it. Velveteen Dream has become a popular pick to challenge Tommaso Ciampa at War Games, and while that might be the plan, Dream wasn’t tipping his hand to Cathy Kelly. Instead, Dream gave her his crown, called her “Queen Cathy”, and told her to tune in at 8 PM on Wednesday to find out his next move.

EC3, on the other hand, was less playful, having just gotten pinned in his first Takeover singles match. EC3 said his story is not over, mentioning losses in New Orleans, at the UK tournament in a tag match, and finally in Brooklyn. Throughout NXT’s time on the network there has usually been a “gatekeeper” character, whether it was Tye Dillinger, Andrade Cien Almas, or Kassius Ohno, somebody has always needed to take the pins against debuting wrestlers or people who are getting pushed towards the title. I think EC3 is about to enter that role, so prepare for him to get tv matches against guys like Keith Lee and Matt Riddle, he could even go after Ricochet’s North American Championship. I said in my War Games preview column that I thought EC3 would be on the main roster by War Games, but after episodes of Raw and Smackdown coming and going, it looks like EC3 will stick around for a little while longer.

Next, the camera cut to Ricochet doing a backstage interview where he was interrupted by Kyle O’Reilly and Roderick Strong. Before they could do anything to the one and only, Pete Dunne stepped in and evened the odds. Dunne made it clear that Ricochet has a piece of gold that he wants, so I’ll be daydreaming about that match for the next several weeks. It seems like things aren’t over between The Undisputed Era and Ricochet, and with Pete Dunne saying, “I don’t like them guys either”, I’m gonna guess he also has unfinished business with Adam Cole & friends.

Update on the Aleister Black attack

EC3 told Cathy Kelly he saw “A 300 pound monster with a busted up jaw” at the scene where Aleister Black was attacked, so now we all know who NXT’s #1 snitch is. Also, Mauro Ranallo showed us that surveillance footage has emerged from the night Black was attacked, and it seems like Nikki Cross was hangin out on a rooftop at Full Sail during the attack. I can only hope this leads to a “William Regal questioning/interrogating Nikki Cross segment” because that would be all kinds of great. If Nikki Cross doesn’t get called up to the main roster any time soon, and it seems like she won’t, I’d be fine with her becoming a sort of “all seeing eye” at Full Sail, watching from rooftops and lurking in shadows, I’d be here for it. 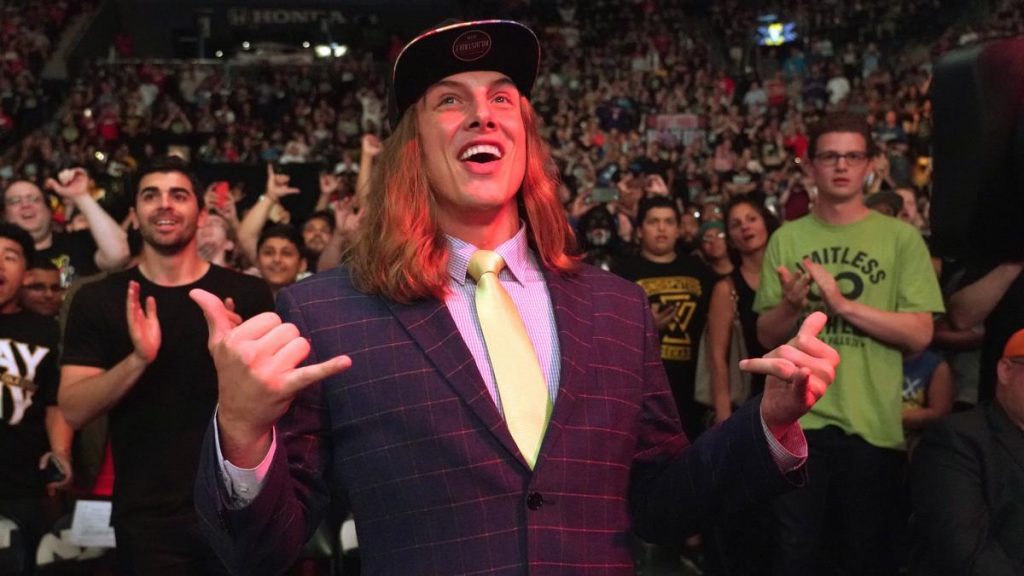 Nigel McGuinness gave the NXT audience an update on NXT’s newest signing, Matt Riddle, and the only really important thing to mention is that the “King of Bros” nickname seems to be following Riddle to NXT. He’s gonna be awesome once he debuts, and I can’t wait. 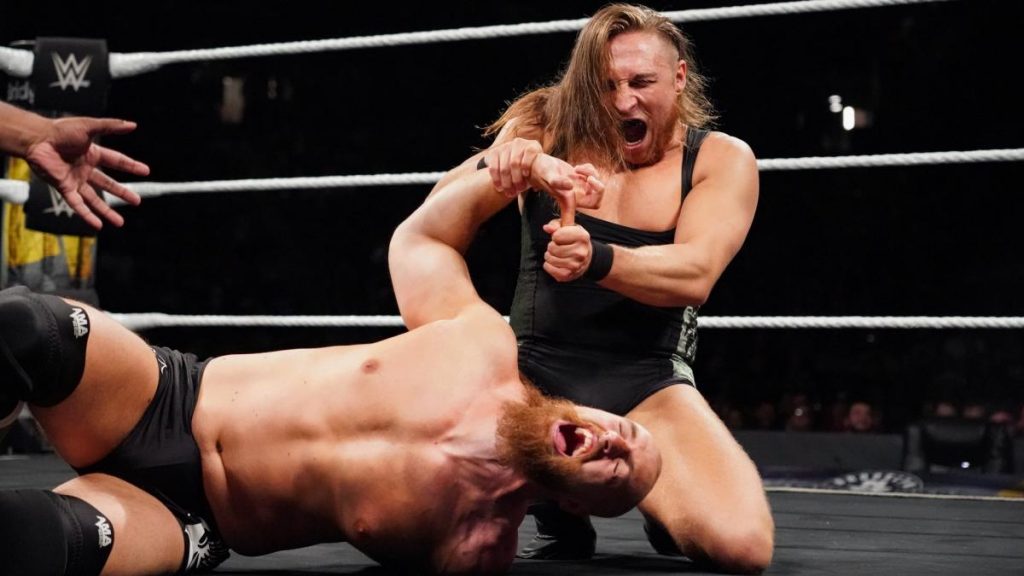 This match was awesome live, and it definitely held up on TV. It’s funny to look back at the end of the first UK tournament and see that Pete Dunne was positioned as the top heel in the UK division, with Tyler Bate looking like the top babyface. I say that it’s funny because Pete Dunne has turned full on babyface pretty much only because of how good he is in the ring. Zack Gibson, on the other hand, looks like the top heel in the NXT UK division. This match was a lot of chain wrestling early but I wouldn’t call it a slow build. The best part of the match was Dunne and Gibson slapping each other while both guys were doing headstands. Dunne retained, hitting the Bitter End after snapping Gibson’s fingers. It wasn’t a long main event, but it was an entertaining one.

Next week we’re getting Kyle O’Reilly and Roderick Strong vs Ricochet and Pete Dunne, so be sure to tune into that, and if you need more NXT content in your life before then you can check out the War Games prediction blog I wrote for Social Suplex (it’s a shameless plug I know, but I’ve gotta get page views)