Report of Honor (4/1): Cody and Kenny Omega Face Off 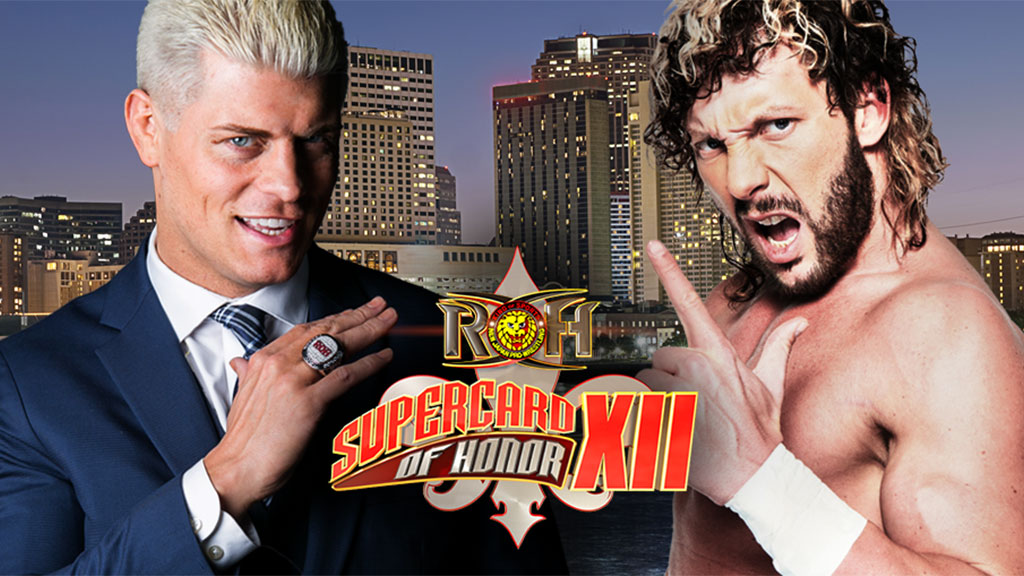 Hello everybody and once again thank you for reading the Report of Honor. I’ll start off by saying that I will be doing a delayed Report that will cover Supercard of Honor XII, which you can expect on this very website by April 10, but I will not be doing one covering ROH TV during the weekend as there’s so much to do in New Orleans (with THE SOCIAL SUPLEX BOYZ) but so very little time do these things. Like I said in the latest Impact Report, I will be releasing a Preview of Honor as well, and you can expect that by Wednesday, April 4. Anyone who happens to be at any of the shows in New Orleans, feel free to come say hello. Let’s get the show started!

The Briscoes get the win over Dalton Castle & Kenny King when Jay Briscoe hit the Jay Driller on Kenny King after a Silas Young distraction. If you’ve ever seen these four wrestle you knew what to expect here, and I was not disappointed. This match was an absolute hoot, but I would like to know why Silas Young took his shirt off when he didn’t do anything besides grab a belt? After that Marty grabbed Dalton’s championship and ran into the ring and teased hitting Dalton with HIS OWN CHAMPIONSHIP but chose the honorable route instead and told Dalton to watch his back.

After a commercial, we are shown a promo from The Kingdom. Despite the fact that I don’t like Taven on a personal level (ask my friend Colvin) I must say this promo was absolutely solid. Taven made it clear that The Kingdom WILL be at Supercard of Honor whether or not they have a match and the intensity felt very real here. Hopefully, their run in will be AFTER the trios ladder match has ended.

The next match is Cheeseburger versus Kikutaro. The Dawgs are on commentary here as well. Lots of comedy in this match as expected, including a half-hearted Fargo Strut from Kikutaro. The Dawgs are heeling up commentary big time, and at one point Kikutaro gets Cheeseburger in position for a DDT, is given a microphone from the official and starts cutting a promo when those damn dirty dawgs interfere and cause the no contest. WHO GETS THE WINNERS PURSE?! The Dawgs land “Who Let The Dawgs Out?” on Cheeseburger and intend to do more when they get chased away by ROH Enforcer Bully Ray.

After another break, we cut to Maya Iwutani versus Deonna Purrazzo. Admittedly this is my third week of watching Ring of Honor regularly so forgive me if I come across ignorant, but Deonna Purrazzo’s voice does not match that of a heel but I suppose that’s why they wrestle too. The match is fairly short and Mayu Iwutani wins with the dragon suplex. Not much to say here other than the match was good and good matches are very easy to appreciate. Also, I suppose Deonna doesn’t sound like a heel because she IS NOT a heel. Forgive my ignorance, she adhered to the code of honor after the match.

After a five minute look at Supercard of Honor, which by the way is going to be an AMAZING show, we are back at Sam’s Town and Cody is here! Cody went SCORCHED EARTH on Kenny in this promo; “Kenny calls me a reject from my former company when he is a reject from their developmental system!” Things are getting interesting now, as Kenny comes to the ring along with the head of Bury, RIP. Kenny gets the verbal upper hand on Cody when he calls Cody a cuckold which is more than enough to set Cody off and cause a brawl which is split up by both ROH security, Marty Scurll, Hangman Page, The Young Bucks, and Flip Gordon.

Truth be told this wasn’t the strongest show I’ve seen from ROH so far, but I’m nonetheless hyped for Supercard of Honor, which I reiterate I WILL be attending IN PERSON. I’ve changed my Twitter handle THRICE since the last Report of Honor and you can now FOLLOW ME ON TWITTER @SclSplx_CalB. You can read more columns like mine right here on this website, make sure to subscribe to us to get our columns emailed to you. Listen to columnists like Brian Kinsella IN AUDIO FORM by searching for SOCIAL SUPLEX PODCAST NETWORK and then subscribing to the channel. Thank you all for reading and God bless.