Report of Honor: Bullet Club vs. SoCal Uncensored & The Kingdom 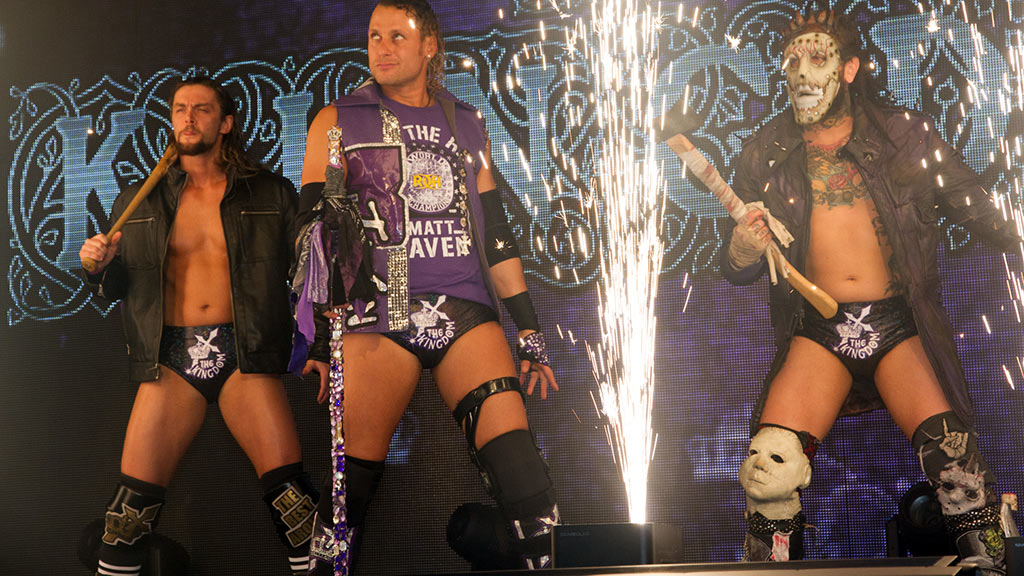 Hey there Social Suplex readers, I hope you’re ready for an action-packed edition of ROH Wrestling because this one was chock full of combat and a bit of advancement for Supercard of Honor as well. If you’re gonna be at Supercard of Honor let me know in the comments below, if you’re not the type to try and wear my skin, we can grab a picture together at the show.

The show begins backstage with The Kingdom talking about The Kingdom conspiracy, and they blame Bullet Club. Daniels of SoCal Uncensored says they were the first victims of a conspiracy in Ring of Honor. We are given tonights main event of Bullet Club (Cody, Hangman Page, Marty Scurll, and The Young Bucks) v. The Kingdom & SoCal Uncensored. Also announced for tonight is Mayu Iwatani v. HZK in the first round of the Women of Honor Championship tournament.

The show starts in the arena with The Dawgs coming to the ring to a mixed reaction, but they quickly turn to boos when Will Ferrara says “ROLL TIDE!” to the Atlanta crowd. Coast to Coast is adored by the crowd and are apparently coming off a win against War Machine going into tonight. Rhett Titus & LSG start off the match with some acrobatics. Rhett gets the advantage early but Will Ferrara takes the blind tag from Titus, boasts for too long, and LSG gets a shot in on Ferrara, which gives LSG the chance to tag out to Shaheem Ali. C2C dominates for a minute or so, but eventually, Ferrara gets the advantage back… just in time for Rhett Titus to take the blind tag.

Back from commercial and Titus gets a near fall after a big splash on LSG in the center of the ring. Titus throws Ferrara into LSG a few times in the corner, but LSG counters with a boot to Ferrara tosses Titus out of the ring. LSG gets a come back in, but before LSG can tag out, Titus takes Ali off the apron and kicks him downward into a waiting security team. Ferrara hits BLL, tags in Titus, who hits The Dawgie Splash but LSG kicked out at 2!

LSG goes for a tornado DDT but gets countered. Titus then aims a big punch for LSG, but LSG ducks and tags in Shaheem Ali who came seemingly out of nowhere. LSG hits a flying crossbody on Titus outside of the ring. The end of the match comes when LSG hits a rotating DDT and Ali a splash on Ferrara. 1…2…3! It’s over, Coast to Coast gets the win!

Winners: Coast to Coast by pinfall

After the match the Beer City Bruiser and Brian Milonas assault C2C, and in disgust, Ian Riccobani sends us to the number one contender to the ROH World Championship, Marty Scurll. Marty congratulates Dalton Castle on defeating Jay Lethal at ROH’s 16th Anniversary show. “Every good fairytale needs a villain, and at Supercard of Honor you will face that villain, and fall victim to that villain!”

Dalton Castle retorts via satellite and sells on how huge Supercard of Honor really will be. Dalton tells Marty that he has worked his ass off to be World Champion and that there’s no way in hell Marty will take that from him. Colt Cabana & Ian Riccobani then take us to Japan for our next match.

HZK dominates early on, and Mayu is selling her ass off in this one. Mayu gains the upper hand when she ducks a Drive-by Kick from HZK. Mayu drives the come back home when she nails a flying crossbody from the top rope to the outside. We go to commercial.

When we come back from commercial HZK has regained the advantage and is striking fast and furious, she nails a senton and gets a 2 count from it. HZK immediately goes into a chinlock on Mayu, and Mayu fights to the ropes after a minute, but HZK immediately starts doing body scissors to Mayu to disorient her. Mayu eventually goes for a northern lights suplex but is countered into a DDT by HZK. HZK nails a Michinoku Driver, then takes to the air and nails a seated frog splash, but for only a count of 2!

HZK is now visibly frustrated and goes for a body slam, but Mayu counters with a delayed German suplex, which is good for a 2 count. Mayu goes to the top and nails a double stomp, which again is only good for a 2 count. Mayu goes for a northern lights suplex, but HZK escapes, only to eat an enzuiguri and a superkick from Mayu. Mayu then lands a crucifix driver, but that’s only good for 2. Mayu then picks HZK up for the northern lights suplex, HZK tries to power out, and then Mayu finally lands a bridging dragon suplex for the pin and the win!

It’s worth noting that everyone but Cody came out to the Bullet Club theme music, and they did so together. Cody comes to the ring, with his own theme music. After 15 seconds of posing, Cody ushers his wife Brandi Rhodes, and Bury the Drug Free Bear to come to the stage. After commercial, all the members of Bullet Club are coming into 1 Sweet each other, but their opponents take that opportunity to sneak attack them. Chaos reigns supreme as Hangman slams TK O’Ryan to the floor outside. In the ring, Cody & Christopher Daniels are going back and forth. Cody subdues Daniels, but Matt Jackson takes the opportunity to complain that Cody has “LEADER” on the side of his tights. Daniels goes to drop kick Matt, but Cody pushes him out of the way.

Daniels has the advantage and tags out to TK O’Ryan, but Cody also subdues TK and tags, Marty, in. Marty hits a double ax handle on TK, and Marty manipulates every joint that TK has, goes for a double stomp on the hands, and TK ducks and then postures, and finally gets a dropkick for his troubles. Soon thereafter Hangman & Kazarian tag in and start going at it with ferocity. Hangman tags Cody in, who gains the advantage on Kazarian. Kazarian then calls a proverbial timeout and asks Cody for a 2 Sweet, which infuriates Cody. Kazarian tags Taven in, who gets a leglock in on Cody and tags Vinny in from the corner, who nails a big stomp on Cody, who then tags in TK.

TK  gets a 2 count on Cody, but the pin is broken up by Marty. SoCal Uncensored then charges the ring and attacks all 4 of their other opponents. Back from the break, Cody gets the hot tag into Matt Jackson. Bullet Club is going crazy, and Marty is even celebrating in the crowd. Cody gets the blind tag, and nails a snap dragon suplex on Vinny for a 2 count. After a bit of chaos, Kazarian is left in a 5 on 1 situation in the ring, and all five members of Bullet Club nail superkicks on Kazarian. Cody begs The Bucks to do The Terminator move along with him, which belongs to of all people, Kenny Omega. The Bucks do so reluctantly.

Loads of dives here for the next little bit and this match is something to behold, and quite honestly very hard to keep up with. The sequence concludes when Bury goes to the top and nails a Bury Bomb on all five of Bullet Club’s opponents. Scorpio Sky interferes on behalf of his SoCal Uncensored teammates and goes for a double ax handle, but Cody moves, and Scorpio nails Vinny. Cody then throws Scorpio Sky out of the ring, picks up Vinny and nails CrossRhodes for the pin and the win! The show ends with The Kingdom & SoCal Uncensored brawling as the Bullet Club looks on.

That’s all for this week folks, I hope you enjoyed reading this as much as I enjoyed writing it! Comment below to give me feedback if you so, please.