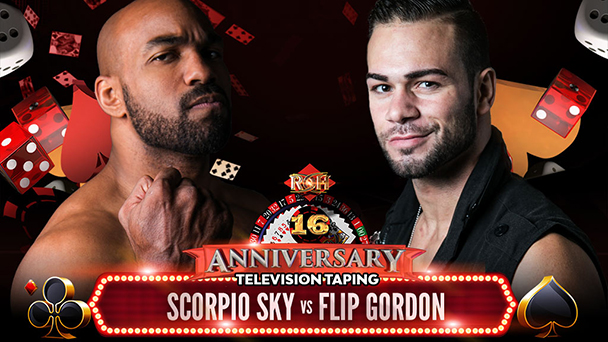 Hello and welcome to my second edition of the Report of Honor! We are “live” at Sam’s Town in Las Vegas, Nevada! Scheduled for tonight is “The Gatekeeper” Kelly Klein versus Mandy Leon, along with The Boys versus Hangman Page & Marty Scurll, and Scorpio Sky versus Flip Gordon! The show starts off with The Kingdom coming to the ring. Vinny Marseglia came to the ring with a clown mask on and a red balloon which was a nice visual. Matt Taven says he hates to repeat himself, but he reiterates that The Kingdom Conspiracy is very real. Taven goes onto say they are going to take their Six-Man Tag Team Championships back. This brings out authority figure Bully Ray who has a very disgusted look on his face.

Bully goes from the ramp to ringside and paces looking irritated. Bully asks if they ever get tired of complaining about a conspiracy. Bully then says “There is no conspiracy; maybe you guys just suck!” Taven reiterates that Bully knows he doesn’t suck. Bully says their constant heinous actions will harbor no good will because The Kingdom is not needed at Supercard of Honor. This draws the ire of all three members of The Kingdom but after a bit of back and forth Bully Ray puts his foot down and says if he could do so right now, he would fire them on the spot. We then go to a commercial signaling the end of this segment. Even though most of us watching know where this will end up, I’m very curious to see how we get there, that’s for sure.

We are shown a window promo during Kelly’s entrance and she says Mandy is nothing more than another stepping stone. Mandy Leon comes to the ring to a very positive response. Mandy points out that Kelly claims to have beaten everyone in ROH, but points out that Kelly has not beaten Mandy. Back in the ring and there is a very tense stare down going on in the middle of the ring. The official calls for the optional “code of honor” handshake but both women decline. The action starts off fast with exchanged strikes in the middle of the ring.

Kelly gains the advantage with a backbreaker over the knee. Kelly picks up Mandy and starts off with knees to the head of Mandy then a knee to the back of the head but that’s only good for a near fall. Kelly goes right back to striking Mandy and The Gatekeeper has had control of this entire match. Kelly covers Mandy with a hand over the face but that’s only good for a two count. Kelly grabs a chin lock and Mandy fights out, but only for a second. Mandy fights out and lands a pair of strikes to Kelly but Kelly eventually neutralizes Mandy and lands a big splash in the corner. Kelly then goes for a second splash in the corner but gets thrown out of the ring for her trouble. Mandy then dives from the apron to the floor and lands a senton. We go to break.

Back from the break and Mandy is on the top rope and lands a dropkick. Kelly retreats to the corner but Mandy lands a knee to the face. Mandy goes for a second knee but Kelly counters and goes for what looks like a powerbomb but Mandy counters with a back body drop and Mandy lands the Kryptonite Crunch but that’s only good for a two count! Mandy goes back to the middle rope but Kelly rushes back and lands forearms to Mandy. Kelly grabs Mandy and throws Mandy all the way across the ring. After a six-count, both women rise and trade forearms. After a bit of sparring Kelly grabs Mandy in a front face lock but Mandy rushes Kelly to the corner and lands kicks to the knee of Kelly, but Kelly grabs a hold while on the ground with a dragon sleeper but Mandy escapes. Mandy then lands a pumphandle slam but KELLY KICKS OUT!

Mandy then goes a Havana Escape submission hold and Kelly is tapping but she is doing so out of the referee’s sight! Mandy celebrates as though she has won but Kelly gets up and locks Mandy in the dragon sleeper-body scissors combo and Mandy passes out, and thanks to her own shrewdness, Kelly Klein has advanced to the semi-finals of the Women of Honor Championship tournament.

After the match, Ian Riccobani sends us to Jay Lethal. Jay Lethal officially announces on TV that he will be challenging The Briscoes for the Tag Team Championships at Supercard of Honor, and he also reveals that his tag team partner is the former Ace of New Japan, Hiroshi Tanahashi. This sends us to a break.

We come back from commercial and we are shown a replay of The Young Bucks & Hangman losing the ROH Six Man Tag Titles to SoCal Uncensored after Matt Jackson is forced to submit. This brings us to a SoCal Uncensored promo and this basically exists for the champions to say they will do anything necessary to remain champions.

Hangman comes out to what is by and large a negative reaction, however, his partner, The Villain comes out to a fairly positive reaction, but Marty is here in a suit with an eyepatch on! Dalton takes the opportunity to join Ian & Colt on commentary. Marty starts off the match and takes his suit jacket off and rolls his sleeves up… and then promptly tags out to Hangman, who is now getting a very positive reaction. Hangman asks for a test of strength, and Boy 1 thinks he has the advantage on Hangman, but it was all a ruse! Hangman throws Boy 1 across the ring and that sends us to a break.

Back from the break and The Boys are in control, but after that Hangman gets the advantage and this is a glorified two on one match. Marty finally tags in and teases some big offense, but then promptly tags back out, but all the while The Boys have pulled twin magic but that’s only good for two. Boy 1 gains control and lands a missile dropkick on Hangman. Marty leaves the ring to taunt his opponent for April 7. All the while Hangman lands a big lariat on Boy 2 for the pin and the win. After the match, Marty grabs the championship, taunts Dalton and then lays the belt back down.

After the match, we are shown backstage footage of ROH TV Champion Kenny King & Silas Young brawling in the back. We are then brought to a promo from ROH Tag Team Champions The Briscoes. The Briscoes promise us that the one thing us marks are going to be talking about after New Orleans is the beating Dem Boyz put on Lethal & Tanahashi. This sends us to another break.

Back from the break and Silas Young & Kenny King are brawling at ringside. Each man is restrained by a security guard but each security guard gets a beating for their trouble. After another wave of security try to break the fight up and fail, Silas Young gets the advantage on Kenny King. This sends Bully Ray and MORE SECURITY to the ring. Silas says he had Kenny beat at the anniversary show and he wants a re-match. Kenny then allows this to happen UNDER the rules of Last Man Standing (at Supercard of Honor) which is a specialty of Silas! Kenny says Silas will have to figure out how to stand with two broken legs.

After the formalities of the entrances occur, Scorpio offers the handshake but Flip knows better. Flip has the advantage early. I just have to say, what an athlete Flip Gordon is, and just as I type this Flip dives to the outside and lands straight on Scorpio Sky! Back from the break and Flip dives but Scorpio ducks! Flip tries to dive again but Scorpio counters and Flip lands face first on THE HARDEST PART OF THE RING. Scorpio has full advantage now and lands a spear in the corner but that’s only good for a two count.

Eventually Flip regains control when he lands a 619. Flip goes to the top but Scorpio ducks. Flip eventually lands a springboard sling blade, but at this point, both Kaz & Daniels interfere! Kaz tries to interfere while Daniels distracts the official, and Kaz lands a fist to the back of Flip and then sets up for a suplex of some sort, but Flip lands on his feet and Kazarian accidentally throws himself out! Flip then manages a wheelbarrow roll through on Scorpio Sky and that’s good for the pin and the win!

After the match, all three members of SoCal Uncensored are beating on the victorious Flip Gordon but they are chased off by THE YOUNG BUCKS of all people! Matt Jackson then offers a handshake to Flip Gordon and let’s see if Flip accepts… at first, Flip does not, but he then changes his mind and shakes Matt’s hand emphatically, and then HUGS Matt Jackson. Bully Ray then comes to the ramp and tells us that he respects Flip Gordon and that Flip has absolutely earned his spot in Ring of Honor. Bully then tells us that the team of Flip & The Bucks would make an interesting team… Bully then officially books, for Supercard of Honor; SoCal Uncensored versus The Young Bucks & Flip Gordon for the Six-Man Tag Team Championship IN A LADDER MATCH! THAT’S OUR SHOW!

Woah; I completely forgot about the ladder stipulation in the six-man tag match. That’ll be a hoot, I tell ya brother. I appreciate everyone who read this. If you want to read more columns like this then just subscribe to this freakin’ website right here! You can hear me on The SMC Wrestling Podcast on the Social Suplex Podcast Network and you can follow me on Twitter @SMC_CalB.