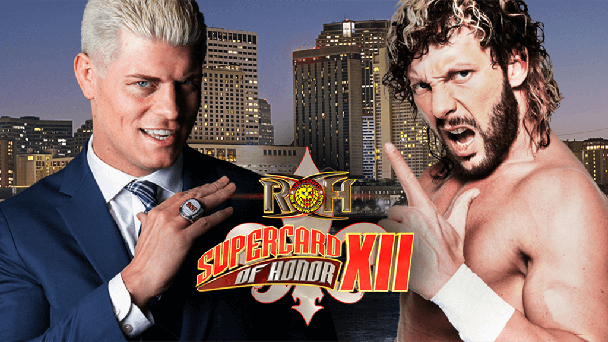 Welcome all you lovely readers! I’m back in the column writing saddle after an extended vacation to the amazing city of New Orleans! Before we get started on this short recap of Supercard, I’d first like to say that you can follow me on Twitter @SclSplx_CalB, you can get notifications on my columns by subscribing RIGHT HERE on Socialsuplex.com (insert cheap pop.) And if you want to hear all the podcasts we have to offer, just search for Social Suplex Podcast Network wherever you download your podcasts!

Today’s column is going to be very different. I’ll just cover the big winners and losers of this show.

Not only was Flip arguably the MVP of the six man ladder match, but later on he was inserted into a feud with a newly turned heel Bully Ray which I believe will be what transitions Flip Gordon into a main eventer here in Ring of Honor. Every high spot you could imagine, Flip was either a part of, or victim of during the ladder match against SoCal Uncensored. Very bright things are in store for Flip.

Dalton was purely a victim of circumstance here. If you saw Supercard, you’d know that Dalton and Marty’s upper-midcard style affair was forced to follow the sensationally booked main event style blood feud match between Cody and Kenny Omega. It doesn’t help that there was no buffer between the matches either. It took A LONG TIME for the crowd to emotionally invest in the main event which was FOR THE WORLD CHAMPIONSHIP. Thank God for Todd Sinclair being willing to bump.

Thanks to a highly entertaining build, the investment in this match was sky high. Also, thanks to the likes of Kenny Omega, the once inappropriately dubbed “Three Star Savior” had a four star contest with The Cleaner. The match may have been slightly overbooked (Bernard took a bump, Brandi took a bump which prompted a THIRD appearance on the night for Flip Gordon, and The Young Bucks interfered at the very end.) The thing I loved most about this match is that it was clearly NOT the end of this feud and I look forward to seeing when the match is re-visited. I may have to even go all in if it means I could see the sequel.

Not only was Kenny in a highly uninteresting last man standing match with Silas Young, but also he was pushed out of this feud by, of all people, Austin Aries who’s the Impact World Champion right now. It also doesn’t help that this match ended with interference from The Beer City Bruiser and they had to copy & paste the duct tape finish from Extreme Rules 2010 with Batista & John Cena. Kenny King is too damn good for this nonsense, I tell ya. (Even if he did get mad at me for burying The Last of Us on twitter once.)

Any time you get a chance to step in the ring with Kota Ibushi you should consider yourself blessed. Hangman was given the chance to show his chops with one of the best in the world. This match was wholly entertaining to all of smart marks in Section O Rows 12 through 14. (Shout out SOCIAL SUPLEX BOYZ.) Hangman didn’t get the win in the ring but he gets the win on my column and anyone that disagrees can feel free to let me know.

Even if he did have to take multiple big bumps from Bully Ray, the guy got to share a ring with BULLY FREAKIN’ RAY. Long live Cheeseburger.

Loser: The fans that bought tickets to Kaiju Big Battel

Seriously what the fuck?! The show ran for four and a half hours, I missed most of the first half of Kaiju, and we left early because we were tired! Even still, Dusto Bunny forever.