ROH Final Battle 2014 is this Sunday on Pay-Per-View and could possibly be ROH’s best show of the year. The ROH roster is so talented and they give stellar performances every night and this show will be no difference. I hope this Pay-Per-View gives ROH the exposure it needs and builds momentum going to 2015. There are a lot of big matches set to take place at ROH Final Battle 2014. Here are my predictions.

Over the past year Adam Page has endured a lot of pain and humiliation being a student of The Decade. In recent months Page’s actions and attitude have become very similar to Decade member BJ Whitmer, which Roderick Strong did not approve of. The tension between these two has been building and will finally explode at Final Battle. I see Roddy doing the honors for Page which will help elevate him up the card in Ring of Honor. With the body of work Strong has developed this one loss will not make or break his career. After all only the Strong survive right?

First things first, of all the names you could come up with for a wrestler, who came up with the name Moose? Anyways it was shame #TheNewStreak was broken thanks to interference from RD Evan’s former allies Moose and Stokely Hathaway. The one thing I do like about Moose and Hathaway’s betrayal is that it looks like the rebirth of Prince Nana’s Embassy. Despite my love for Prince Nana and the Embassy I believe that RD Evans will get the revenge he is seeking and defeat Moose. Perhaps this victory will start a new new streak.

This match is going to be an all out brawl. Michael Elgin and Tommaso Ciampa despise each other and it’s always fireworks when they step into the ring together. I’ve been a big fan of Ciampa since he debuted in Ring of Honor. I love his Project Ciampa finisher! Ciampa has been looking for opportunities to prove he deserves a title match and be a main event player. I think at Final Battle Ciampa will prove to the world why he should be next in line for a World title shot by defeating the former champ Elgin.

The Young Bucks & ACH vs The Addiction & Cedric Alexander

This match has the potential to the steal the show. This match contains two of the best tag teams in the world today and two of the most athletic blue chippers in ROH. This will be The Addiction’s first Final Battle appearance and I think that will drive them more to pick up the victory. Also I think the Young Bucks will be too focused on their big match at Wrestle Kingdom 9 and will over look The Addiction and Alexander.

Jay Lethal has had an incredible year in Ring of Honor. I always thought Lethal was an amazing wrestler and pefromed well as a babyface. But his performance this year as a heel under the management of Truth Martini and The House of Truth has really out-shined anything Lethal has done before. I’m sure there TNA officials are slapping themselves in the face for letting go of such a hot prospect. TNA’s loss is ROH’s gain and the same can be said for WWE’s loss in Matt Sydal. Despite failures of the WWE drug policy and a major injury, Sydal left his mark on WWE and should have been given some more grace. Since returning to ROH after his WWE release Sydal picked up where he left delivering amazing matches. Now these two stars collide for the ROH Television Championship. This will great back and forth match but, at the end of the battle I see Lethal retaining possibly with the help of Truth Martini.

The team of Kyle O’Reilly and Bobby Fish, reDragon, have been making waves in tag team wrestling over the last several months. They won the New Japan IWGP Super Junior Tag Team Tournament, IWGP Junior Heavyweight Tag Team Championships, and are the ROH World Tag Team Champions. At Final Battle their challengers are NJPW’s Time Splitters. I’m not too familiar with the Time Splitters but, I’m very familiar with one half of the team, Alex Shelly. This will be the third bout between these two teams. This match also has potential to steal the show. I believe that reDragon will retain the titles in a very close match and continue their momentum into Wrestle Kingdom 9 on January 4th.

Fight Without Honor for the ROH World Championship 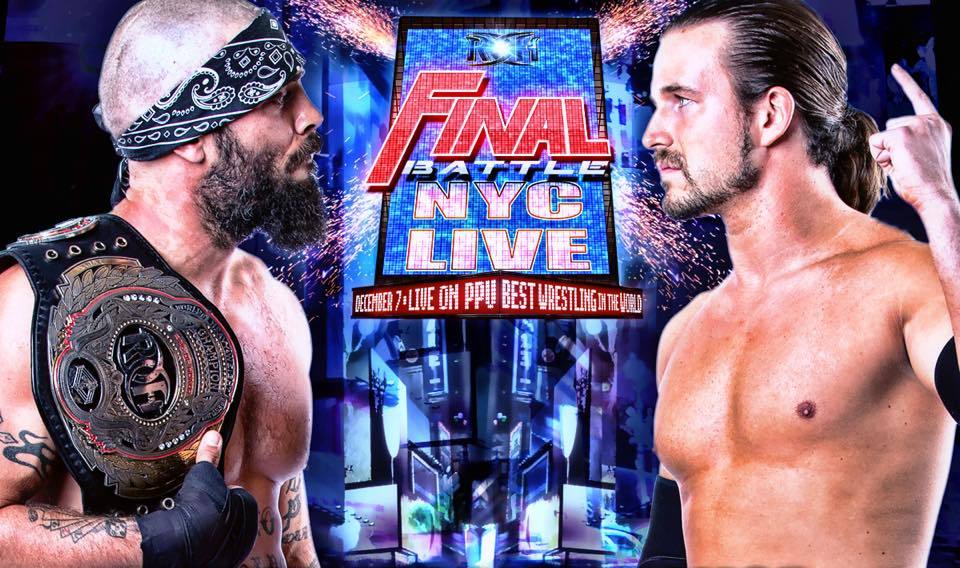 The main event of ROH Final Battle 2014 is a Fight Without Honor, which is pretty much a No Disqualification match. Jay Briscoe has a lot to prove in his second ROH world title run after his first run was ended abruptly due to injury. Adam Cole is the man that took the ball and ran with it after Briscoe had to vacate the title.  Cole had a successful 275 day title run before it was ended by Elgin. Cole will be looking to regain his World  Title and become King of The Kingdom. This rivalry become more personal when Cole attacked Papa Briscoe. This will be a brutal back and forth match. As much as I love Adam Cole, I think that Jay Briscoe is going to retain the title and have a lengthy title reign.

What are your ROH Final Battle 2014 predictions? Sound off below in the comments.