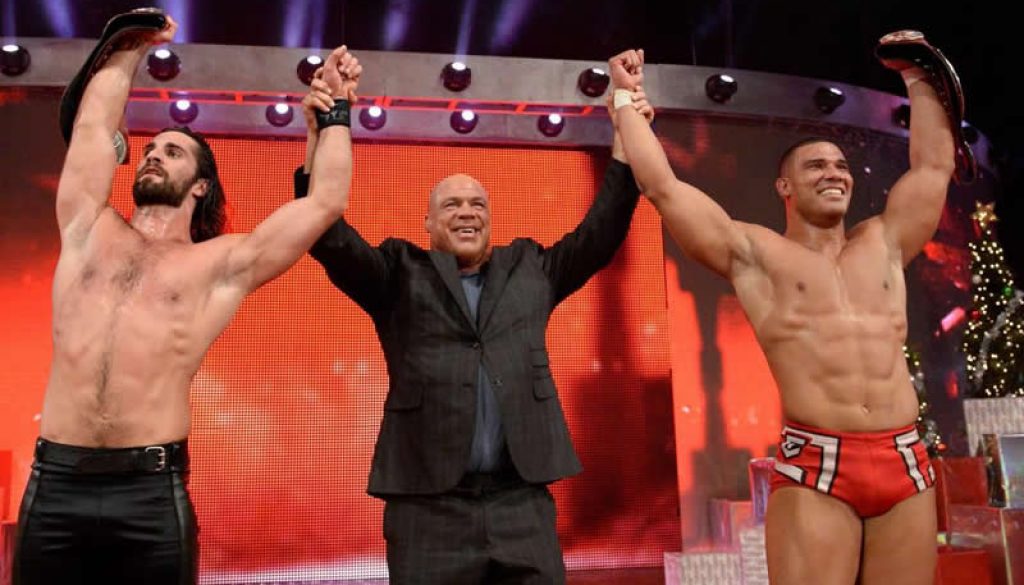 The Spring and Summer of 2017 in WWE gave fans what could be considered the polar opposite of compelling and successful storytelling.

On one hand, you had a young athlete in Jason Jordan with potential abound as one half of the exciting tag team, American Alpha, on Smackdown Live. Then for the sake of sensationalistic creative, that tag team was ripped apart with the intention of shoving Jordan under the spotlight on Monday Night Raw as the illegitimate son of Kurt Angle. The weeks that immediately followed this reveal were bizarre viewing, to say the least. However, with hindsight in mind, I began to see the bigger picture in Jordan’s journey on Raw, which can be looked at more in depth here.

At the very least, it should have been clear to a keen eye that fans were supposed to moan and groan whenever a Jason Jordan segment was gifted to us. Despite my retrospective praise of Jordan’s character as a whole, I reiterate that the initial presentation was hard to accept as credible or even entertaining.

On the other hand, during this time, you had Seth Rollins. A man who, despite being the ultimate victor in the feud with his mentor turned nemesis in HHH, was struggling to find himself even after such a career-affirming start to the wrestling calendar. The one thing still standing in his way, however, was Dean Ambrose. Former partner, former brother. The stars aligned as far as creative was concerned. The will they / won’t they story that was told over a number of weeks culminated in an emotionally rewarding payoff, with a victory in a Tag Team Title match as a very happy bonus.

With Roman Reigns taking little time to realize that being on Seth and Dean’s side was a win-win for everyone, The Shield reformed. All the heartache and bitterness ever felt from Seth’s betrayal three years prior was forgotten. Seth Rollins was a new man; his demons were a thing of the past. This was a good time to be a WWE fan. More specifically, a Seth Rollins fan. He could now proudly boast having no insecurities to his character.

This was in stark contrast to Jason Jordan who, over the same time period, would show a maturity and enthusiasm in the ring against some of WWE’s biggest stars, yet in the same breath wear his emotional immaturity and insecurities on his sleeve. The ongoing battle within himself to emulate his father was not proving popular with the WWE Universe.

As fate would have it, due to Jordan’s insistence on sitting at the grown up’s table and Kurt’s thinly veiled nepotism, Seth Rollins and Jason Jordan became a tag team.

This is a case of opposites attracting, in that although it might not be happy times for Seth Rollins in all of this, it makes for an interesting trope in professional wrestling that isn’t used as much as it could be anymore. Or perhaps the story is so interesting due to its natural pacing in a world where such attention to long-term creative direction is rare for one wrestler, let alone two.

They are opposite in that Seth is noble and a smart champion, whereas Jason, is childish and easily excitable. Rollins, as proven with his telepathic chemistry with Dean Ambrose, is very much a team player and understands the stakes and risks involved in tag team wrestling, unlike Jordan, who is selfish and too eager to impress at the cost of victory.

Seth has also shown, especially in his feud with HHH, that he is willing to fight through the pain barrier, even to the detriment of his overall well being. Jordan plays up his injuries whenever he feels like it unless he believes a standout performance would impress Kurt Angle.

Take the recent Tag Team Championship defeat to The Bar at Royal Rumble. You could understand if Jordan was unable to compete again after his head knock; this makes sense, especially in today’s sensitive world. But for him to then tag himself in blind for a shot at glory was naive. Seth may have fallen to Cesaro and Sheamus eventually if he was left to his own devices throughout the match, but Jason’s greed being followed by deserting Seth altogether shows that he isn’t a team player at all and was ultimately the key factor in his and his teammate’s loss.

When you think about it, this wasn’t the Jason Jordan we saw when he was paired with Chad Gable. Yes, they were both young. Yes, they were both inexperienced. But there was a unity and cohesion between the two. A real sense of togetherness. Any humility and personability that Jordan had at this time are gone as the ego stroking that came with being revealed as Kurt Angle’s son has gone to his head.

Another opposing character trait in both men is the respect and treatment they give their mentors as they make a name for themselves in the early stages of their main roster career. Although at the time, Seth was a cowardly heel who would take any shortcut available to him to win, he always did the bidding of his mentor, HHH. Inevitably, he was loyal to a fault. However, Jordan’s treatment of his mentor is outright disrespectful. His refusal to take on board the advice of Seth, a man who’s seen and done it all, is a slap in the face to a wrestler who has been on the other end of such a relationship.

With the most recent developments on Monday Night Raw, Jordan’s petulance and inability to commit to a cause reared their ugly head yet again. His insolence is so intense that his behavior has started to rub off onto Rollins himself, to the point where he is unable to rise above these playground games. Rollins cut a frustrated and erratic figure on Raw, just like his counterpart in this piece.

Jordan’s pettiness reached a peak when he interfered and influenced the outcome, yet again, of a match involving members of The Shield. What this boils down to, for me, is sheer jealousy on Jordan’s part. Unable (and unwilling) to wrestle properly until he is medically cleared, he takes out his frustrations on those whose side he is supposedly on, just so they can’t prosper in his absence.

What Jordan’s problem ultimately is, in conjunction with the emotional struggles brought on by the relationship with his father, is that his bull-headed obsession with being as equally successful as the Olympic Hero was in his early WWE days is causing him to behave more irrationally as the weeks go on, to the point where it has come to a head, what with him having to take time off for neck related injuries. Talk about irony.

What is Seth’s problem? What is causing him to struggle to gain his footing on a TV show full of highly talented wrestlers when he is arguably one of the most talented and popular? The answer, simply, is Jason Jordan. He is a thorn in Seth’s side. One could argue that Jordan is bringing Rollins down to his level, that of an also-ran who should be at the top of the mountain that is Monday Night Raw if he was more focused. Seth is lumbered with an inexperienced and immature man who has ideas above his station. Until Jordan gets a reality check, whether in the form of medical examinations or Seth finally losing his cool, he will continue to wreak havoc. Even with the real worry of Jordan’s neck injuries, that’s not to say he still won’t make Seth’s life a living hell over the next few weeks in some form or another.

As far as storyline goes, Jordan has landed yet another blow to Rollins’ competitive credibility. With Jordan seemingly out of the way, for now, Rollins can reassess his goals, and maybe climb the singles mountain that he looked so good on three years ago. The issue with that, however, is if he becomes a main event player again, then Jason Jordan will be sitting at home and watching this take place. His injuries may heal over time, but his envy won’t. His jealousy will fester until it rots. This could be the end of the Rollins and Jordan chapter at present, but this story is far from over.

What are your thoughts on the Rollins and Jordan relationship? Is Jordan’s personality too insufferable to appreciate? Has Rollins’ being dragged into the circus of Jordan’s selfishness stunted his credibility as a main event star? Feel free to drop your comments here or wherever you read this over social media @rickyandclive on Twitter, and in “The Wrestling (Squared) Circle” Facebook Group.