Royal Rumble 2015 is upon us! The road to Wrestlemania has started. After this show we will know what our Wrestlemania 31 main event will be. The undercard is very weird this year. Its been said that Vince is not a fan of tag team wrestling, but we have four tag team matches on the card. The positioning of these matches will be interesting. I’m also curious to see if the Rumble ends the show or the title match. In years past, there have been a couple rumbles where the chose to end with title match. No matter how the card is ordered I’m excited to watch. Here are my predictions:

I like all of the guys in this match, but I don’t think the Philly crowd is going to react well to them. It seems like WWE is still attempting get the New Day over. They have momentum going into this match and I believe that they will pick up the victory. All six of these guys are talented and hope to see them later in the night in the Royal Rumble. 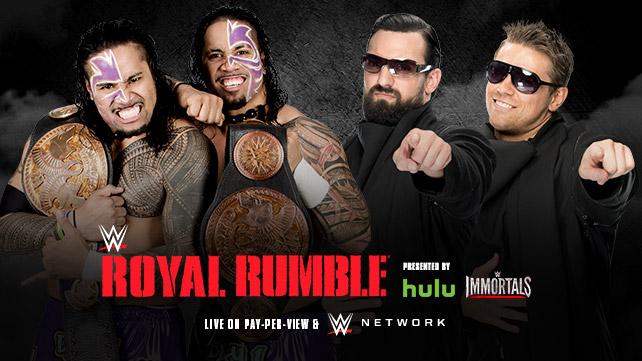 Last month in my TLC predictions, I thought that the Usos were going to win the titles and we would start to see the break up of Miz and Mizdow. That didn’t quite happen, but now that the Usos have the titles I think this is the night we see the break up of Miz and Mizdow. Both of these teams are also in the Royal Rumble. On Smackdown the Usos asked Mizdow when he was going to stop being a stunt double and become a star. I think the Usos will retain due to miscommunication between Miz and Mizdow. Then we will see the tension of that lost boil over into the Rumble match.

Paige & Natalya vs. The Bella Twins 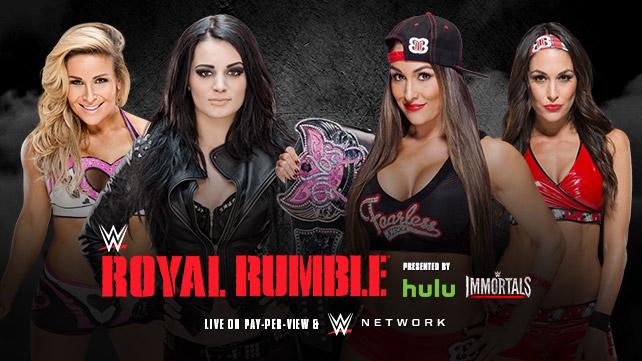 I’m a little confused as to why they went with a tag match instead of a Diva’s title match, but either way I still think this will be a good match. I know most internet fans will want to hate on this match because it’s a Total Divas storyline and because the Bellas “suck”. I’ve said over and over again, the Bellas get better with every match they have and we all know that Paige and Natalya are great workers. I see Paige and Natalya winning this one which should set up a triple threat or fatal four way at Fast Lane next month.

The Ascension vs. New Age Outlaws 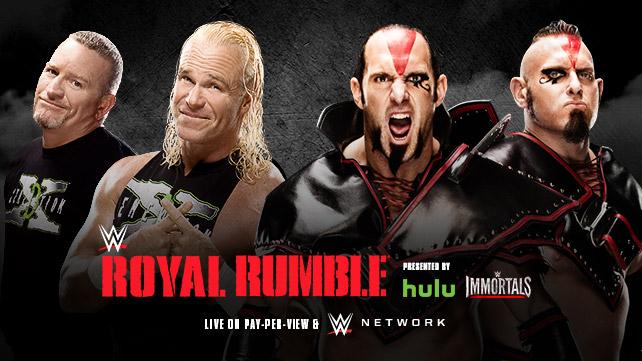 Poor Ascension. These guys were top prospects from NXT and have been given horrible direction since they’ve made the jump to the main roster. I don’t think they needed the face paint or the shoulder pads and I don’t think it was necessary to mention LOD or Demolition in their promos. They should have just had them wreck jobbers, Los Matadores, and New Day and claim to be the greatest tag team ever. Which could have still lead them into getting squashed by the legend teams. A lot people are saying that the Ascension are getting “buried”. If they were getting buried they wouldn’t have been in that segment with the legends and they wouldn’t be having a pay-per-view match with the New Age Outlaws. I’m predicting that the Ascension will dominate the Outlaws like the Shield did at Wrestlemania 30. This will establish the Ascension as a team not to mess with and get them closer to a tag title match.

Finally, after three months the WWE Championship is being defended. Everybody is anticipating the result of this match because we’ll be a step closer to knowing what the main event of Wrestlemania is. There are so many scenarios that can take place in this match. As much as I would love to see Seth Rollins leave with the WWE Championship I think Brock Lesnar retains. With him ending Undertaker’s streak and dominating John Cena, Lesnar needs to end his run by defending the WWE Championship at Wrestlemania. Also, if Lesnar is leaving WWE, they could do a title hijack storyline. Brock can come out and say Wrestlemania 31 is going to be his last match and he plans on taking the title to UFC.

There has been debates for months about who people think should win the Royal Rumble. A lot of hate has developed for Roman Reigns because he has been rumored to win the Rumble for some time now. I like Roman Reigns, I really do. Do I think he’s ready to win the Rumble and headline Mania? No, but I’m not going to bash him. He’s doing the best he can with the creative that’s given to him. I still think he needs more time to develop before he’s ready to main event Wrestlemania. I’m going with Daniel Bryan to win. It’s the perfect story to tell. Bryan finally overcomes the odds and becomes Champion. Then his life goes into a downward spiral, his dad dies, and he gets injured has to forfeit the title and sit at home for months. Now he’s back and better than ever and outlasts thirty men to get to Wrestlemania to fight for something he never lost. I think the money match is going to be Brock versus Bryan. I know people don’t think that the match is believable. To all the unbelievers, I want you to watch Brock versus Punk from SummerSlam. Punk much like Bryan was smaller than Brock but, took the fight to him.

What are your Royal Rumble 2015 Predictions? Sound off in the comments below.