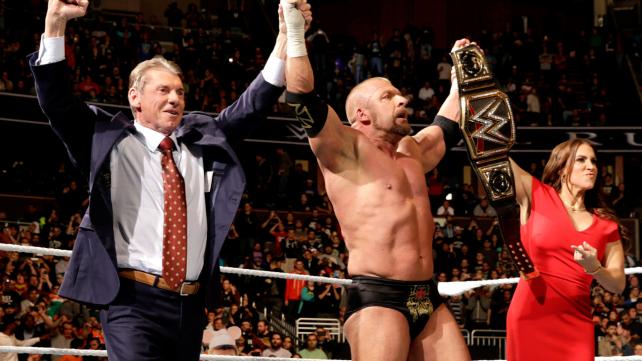 I watched the pre-show with the wonderful Renee Young, although grew rather tired of Jerry Lawler’s one-liners quickly. The pre-show match was unspectacular aside from the huge reception from the Orlando crowd for Damian Sandow. I think Sandow is criminally underutilized following his poorly handled split from The Miz at Wrestlemania last year. He appears to be essentially doing a babyface version of his old character and that works for me. It is clear he is still “over” with the WWE Universe and hopefully, this showing will mean we see more from the former, “Intellectual Saviour Of The Masses”.

The show itself kicked off at breakneck speed with the Intercontinental match between champion Dean Ambrose and Kevin Owens, all this under Last Man Standing rules. The match saw the use of a number of weapons and some brutal looking table spots, including the finish, and both men put everything they had on the line for their craft. Ambrose picked up the expected victory when Owens flew from the top rope to the outside and through two stacked tables. I thought the biggest achievement in the match was that both men managed to create a hardcore feeling in a PG setting. That isn’t easy and although no blood is allowed, or is needed, these days the opponents selling and facial expression picked up a lot of the slack to make this a barn-burning opener.

Next up saw the ever wonderful New Day take on the Usos in a largely forgettable yet fun match for the Tag Team Titles. Not because of the tag team champions, but who they were competing against. My overriding thought during this match was that the Usos really do not have a character. Their whole persona is based around who they’re related to. They’re Rikishi’s son’s and Roman Reigns’ cousins and somewhere down the line, they had a Thanksgiving or two with The Rock. That isn’t a gimmick. The paint etc is cool and the entrance is different but they don’t mean anything. The Dudleyz have their tables, The Ascension are creepy, moody destroyers and even Los Matadores are bullfighters! The Usos don’t have an identity. Personally, I would like to see them turn heel if you’re going to run with the Samoan heritage. Make them a team that beat the tar out of teams in an athletic manner. Silent and moody. They don’t need bones in their hair or Captain Lou Albano with them they just need an identity.

In this instance, they are going against the biggest bag of charisma in the WWE at present in the New Day and it shows up the Usos shortcomings. Hopefully, the New Day’s victory here after a nice Big E, Big Ending, spot for the win means we see New Day with a new challenge such as the Harper and Rowan team or some possibly even a new team from NXT?

Since WWE took the US Title from John “Open Challenge” Cena so he could take a well-deserved length of time off it has been devalued on a weekly basis. Del Rio has barely defended the belt and when he has, finally, got into a programme that has some legs (with Kalisto) they have switched the belt on a near daily basis. We saw another title switch here back to the Lucha Dragon which makes more sense than Alberto just carrying around as a prop. Kalisto is being built as a new Rey Mysterio and despite the odd “botch” in his matches, delivers some wonderful action in the ring. I would like to see Kalisto have the belt now at least until Wrestlemania with a new opponent. Del Rio doesn’t need the belt and with the League of Nations storyline has other things on his plate. Hopefully, this match was the rubber.

The final one-on-one match on the show saw the Divas (can we just stop using the word “Diva” please?) Title on the line between former best friends Charlotte and Becky Lynch. This was a good match, and their work together continues to show what the women of WWE can do on a big stage. Positioned here in the semi-main event spot the ladies delivered a match with a good story and some stellar in-ring action. Charlotte retaining once again because of her father was predictable but when you saw the aftermath made sense.

Sadly for Becky, it appears she was a stepping stone to bridge to a Sasha Banks Vs. Charlotte match at Wrestlemania which I would imagine will see Brooklyn’s own, finally, capture the top women’s prize in the industry. Banks is still positioned in that grey area of good/bad but with Charlotte being so out and out heel, especially with “Naitch” at ringside, that surely we see a babyface Sasha take on The Flair’s. I’m not sure where this leaves Naomi and Tamina but I’m very much looking forward to seeing what these two ladies can do on the grandest stage of them all.

Then we came to what Howard Finkel would call, “The Main Event Of The Evening…”. The Royal Rumble match is my absolute highlight of the WWE calendar, and this was a good one. It predictably started out with Roman Reigns eliminating people but not without pause for the biggest shock of the evening in the shape of The Phenomenal One – AJ Styles. I have long been a fan of Styles’ work in TNA and New Japan but I honestly never thought we would the former leader of The Bullet Club in WWE. This appearance/signing is a shining example of the changes in philosophy that Triple H is ushering in. Styles stuck it out in the Rumble match for twenty-eight minutes on his debut which was a great showing and although not hitting the Styles Clash demonstrated a large amount of his crowd pleasing offence. The matches this guy could have with Seth Rollins and Kevin Owens to name a few, but these two are mouth watering.

The Rumble bounced along at its familiar pace seeing the likes of wasted talent Tyler Breeze, Curtis Axel and Goldust eliminated while Reigns continued to battle everyone. Not until the beginning of the Wyatt Family entrances with Luke Harper at thirteen did we start to get any real storyline developments. The Wyatt monsters entering at thirteen, seventeen and twenty-one had me looking forward to a Wyatt Family demolition job but the whole faction being in the match at once was short lived in fact. Storyline injury put pay to Kevin Owens hopes as fellow favourites Reigns and Jericho battled on.

Reigns being taken out by the League of Nations before leaving on a stretcher had me thinking we were going to see a Super Roman style return and victory. That was until Brock Lesnar’s music hit at number twenty-three. Lesnar predictably cleaned house, but was later attacked and eliminated by the Wyatt Family to set up a very intriguing Wrestlemania match. Once Brock was out it seemed a walk to a Reigns win before Motorhead boomed from the arena’s PA system and we saw the return of The Game, Triple H. From that moment I was always sure “Trips” was winning. The closing stages where HHH eliminated Roman followed by a face-off with Dean Ambrose did a lot for the Lunatic Fringe and actually gave it the feeling that Triple H was having to work for this win. I thought it was wonderfully done.

My Final Thought of the 2016 Royal Rumble was the potential of what lies ahead. Owens vs. Styles, Ambrose vs. Y2J, and my personal favorite Wyatt vs. Lesnar. I predicted the winner or every match on the card, and in most cases the scenarios that accompanied them but it didn’t stop it being a fantastic spectacle. WrestleMania season is upon us and it looks like it has a chance of being the best story telling one in years!