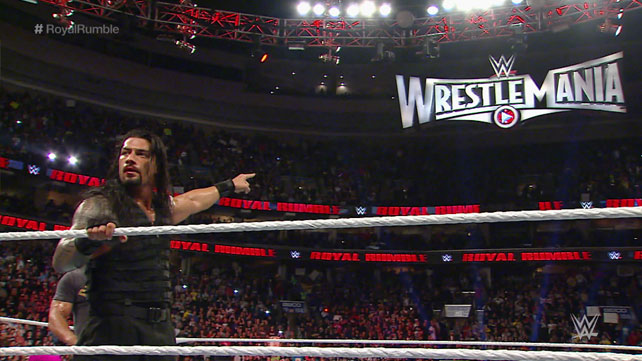 Roman Reigns has been a divisive figure among WWE fandom for the better part of four years now. I’m not ashamed to say I was a member of the party who becried his ascension through the ranks in, what felt like at the time, a forced and rushed manner.

At the same time, the Royal Rumble matches in recent years have personally left a lot to be desired. This is down to a variety of reasons, such as Daniel Bryan’s omission and sudden elimination from two subsequent matches, or having veterans like Randy Orton, HHH, John Cena, and Batista take the prize when a long list of current generation wrestlers are struggling to make a name for themselves in the company.

One thing that has become evident with time is Roman Reigns has played a pivotal part in each of the last four Royal Rumble matches. I wonder if his prominence on those nights is the real reason for my disappointment in the annual event. Perhaps not taking to Reigns, whose Rumble stories have been major talking points, is why I have, until recently, been unable to put petty opinions to the side and just enjoy the Royal Rumble at face value.

Towards the end of last year, however, I was finally able to stop being so stubborn in my beliefs and appreciate Roman Reigns for the wrestler he is as well as the character he portrays. Now, I can look back over his career to date with fresh eyes, and with the Royal Rumble just around the corner, now is a suitable time to do a retrospective of the performances and the stories he told in each of those four nights.

What I’ve come to realise with Reigns’ Rumbles is that if the matches are taken in isolation as career milestones, they each correspond well to the natural progression of a promising WWE Superstar through their time on the main roster, from a crowd-pleasing workhorse, all the way to being one of the lucky few to face the Undertaker at Wrestlemania.

This Rumble match would see Roman Reigns stand out from the crowd in a performance that was reminiscent of Kane’s relentless destruction through the 2001 affair. The Big Red Machine’s onslaught is still a vivid memory to this day. With a record-breaking eleven eliminations under his belt, Kane was a dominating force. Thirteen years later, Roman Reigns was the one to break that record in formidable fashion, eliminating twelve men over the course of the match, before eventually being eliminated by Batista.

This was an important night for Reigns as many fans felt that he could have a successful singles career. Using this performance in comparison to the first few years of a wrestler’s impact in WWE, the night was the equivalent of a man rising through the ranks and impressing with his in-ring domination. This is an attribute that most wrestling fans appreciate, and they did so here with Reigns. That is until fan mentality began to sour.

This incarnation of the Rumble will go down in [fan] history as one of the match’s most disappointing outcomes. Not even the assistance of someone as universally adored as The Rock could stop the deafening chorus of boos.

However, in comparison with any other wrestler’s progression, this was the natural next step for Reigns to take. In the year prior, he came up short, he helped put Evolution out to pasture shortly after with his Shield cohorts, and then made a claim for the WWE Title in a MITB style ladder match at the PPV with the same name later on in 2015.

Roman’s Rumble victory that night wasn’t anything out of the ordinary when compared to any other wrestler who has toyed with being a credible threat in the main event scene.

While he was ultimately the victim at the end of that night, the 2016 Royal Rumble was very clearly a Reigns centric match. With Roman’s recently captured world title on the line, and him starting the match as the first entrant, this was the latest rehash of the story of Hero vs Oppressor, which in WWE language roughly translates to “Babyface vs Authority Figure of the Month ”. Steve Austin. The Rock, Daniel Bryan. Those are some of the names that come to mind who had to triumph over the Big Bad in WWE to finally win the gold for the sake of all that is good.

At this Rumble, it was Roman’s turn to battle with adversity. Just like his predecessors, Reigns fell almost at the last hurdle. To whom, I hear you ask? Well, a member of the authority, of course.

Just like the previous two Rumbles, this sixty or so minute window is indicative of the struggles that a top babyface in the company experiences over a longer time when facing off against the higher power.

Moving further into his condensed career, last year’s Rumble was the night where Reigns reached a milestone that so many wrestlers over the years can only dream of achieving; getting the attention of The Undertaker.

Not happy with his second consecutive loss to Kevin Owens over the Universal Title earlier on in the night, Reigns declared himself as a Rumble entrant to win his championship opportunity back. It just so happened that in his quest to do so, he had to eliminate The Phenom in the process. Of course, this was an unpopular move on Reigns’ part, but as hell-bent, as he was to win the Rumble, he didn’t think twice about throwing the legend over the top rope.

Unfortunately for Reigns, his entry was in vain, and his further interactions with The Undertaker would set up the next chapter in his character’s story. What is there left for a wrestler to accomplish when, within that specific window of time, he is unable to compete for the main event championship? The answer is a Wrestlemania match with The Dead Man.

Not many have had a ‘Mania program with Undertaker over his career. Over the last ten to fifteen years, the majority of wrestlers chosen are considered worthy of such an accolade. Although some fans disagree with Undertaker becoming defined by the Show of Shows, it’s hard to argue that a wrestler has reached that lofty height of stardom when they’re involved in such a program. Like those that came before him, Roman Reigns reached that next level.

The above analyses shows me, perhaps surprisingly, that Roman’s character has progressed quite naturally if a little rushed for some. He has won over the crowd with a standout performance. He has advanced incredibility with a Rumble win. He has been involved in a championship program that just happened to be in Rumble match rules. And lastly, he has achieved a rarity in headlining Wrestlemania with The Undertaker. That reads as a normal progression for a successful (albeit extremely so) WWE Superstar.

Back to present day, and with Reigns recently losing the Intercontinental Title to The Miz, he now has a clean slate. He’s done it all in his short career so far, but he still has a hunger to be the top guy within the company. From his point of view, he should be going into this year’s Royal Rumble with a clear goal in mind; victory.

I personally have other wrestlers I would like to win the match, but it wouldn’t be the end of the world for me if he was to win again, even if it is in the same city he was so wholly rejected in three years ago.
Despite my newfound appreciation for Reigns, he still has his detractors out there. And whether you would be happy with it or not, a win for Reigns would simply be another chapter in his overarching story as the January showcase has quietly become, for better or worse, The Roman Reigns Show.

What are your thoughts on Roman’s stories taking center stage in the last few Rumbles? Feel free to drop your comments here or wherever you read this over social media @rickyandclive on Twitter, and in “The Wrestling (Squared) Circle” Facebook Group.

You can read more of my columns right here