Sami Zayn: Do We Want Him to Win The NXT Title or Lose? 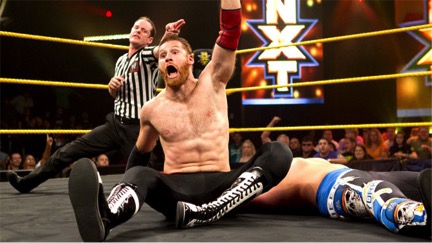 On Thursday December 11th, at NXT R Evolution, Sami Zayn will be challenging long time friend, and now rival Adrian Neville for the NXT Championship, and if he doesn’t follow through on his promise of victory he will quit NXT.

For many fans, this situation brings up a myriad of mixed emotions. As NXT’s top fan favorite, Zayn has thrilled the Florida audience for well over a year.

We’ve questioned how on earth he hasn’t already held NXT’s top title, and been thrilled by the guile he’s displayed in defeat. So it begs the question, are we sure we want Sami Zayn to win? I mean what would it be like? Do we do backflips? But what awaits the former El Generico if Neville retains the title?

Conversely, the elephant in the room is his impending call up to the main roster, which he’s been on the doorstep of for months. It’s the happy ending that “Loser Leaves Town” matches in the 1980’s couldn’t facilitate. However, it may not be the place he wants to be as a new star on the main roster. In the middle of WrestleMania season, the focus is due to shift to bigger stars, with longer main event resumes, than the guy in the old man hats we all rightfully chant “OLE” for.

As a fan that’s watched Zayn wrestle 3 times in one night, on multiple occasions at Full Sail (quickly becoming the modern ECW arena) it will be hard to replace his energy, and fan connection. AND HE’S DOING THIS WHILE NEARLY LOSING EVERY BIG MATCH. In a world of burials, Zayn has basked in the odor of losing, and not suffered any loss of status. Think Daniel Bryan vs The Wyatt Family, adjace (to quote Peter Rosenberg.)

As great as Adrian Neville, Tyson Kidd & Co. have been, Zayn is the Heart and Soul of NXT. Who knows if he or the powers that be at NXT can recreate this feeling once he’s on Raw & Smackdown, in a world that feels galaxies away from Full Sail. Don’t’ forget there’s a guy that is pretty much a more beloved version of him on the roster already, Daniel Bryan. 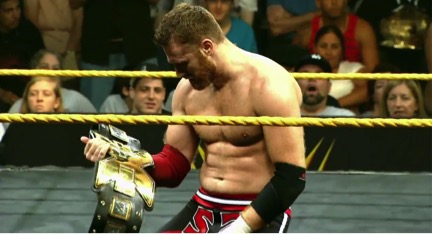 Although a Zayn win would be an electric moment in the history of NXT, it’s fair to ask how long his reign could continue before it feels like he’s kissing his sister. In NXT he’s clearly THE MAN, but the real question isn’t “Can Sami Zayn Win The Big One?” as WWE has masterfully booked into fans minds, its “When Is He Getting Called up? And what will WWE do with him?” The championship would be a great thing to pacify fans clamoring for Zayn to climb the mountain, but in essence it would rob us of what drew us to him in the first place.

Zayn is hardly the first man to get over by showing excellence in defeat, but it doesn’t hurt to be the latest. Would beating Bret Hart have blasted Stone Cold into superstardom any faster than what actually happened? I’m guessing no.

With the new talents of Hideo Itami, Baron Corbin, Kevin Owens, and Finn Balor making their presence known, NXT may have found a few men to step in the large shadow his potential departure will cast. It’s a true dilemma, as he will remain in the comfort zone of NXT, or go off into the great unknown that is the main roster. Perhaps the best way to approach this monumental contest is to worry about December 11th before we start fantasy booking Zayn’s path to the WWE Hall Of Fame.