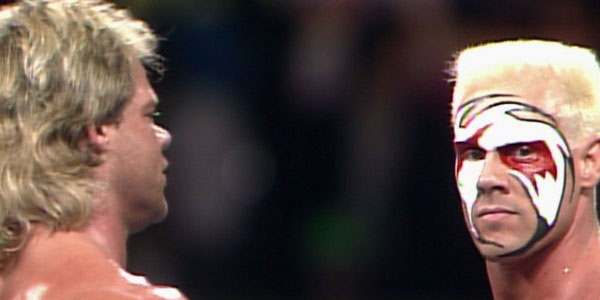 SummerSlam has always been my favorite WWE pay-per-view mainly because it always takes place on or around my birthday. Even though I see it as a birthday celebration for me, SummerSlam is one of the “Big Four” pay-per-views and has brought us some great matches over the years. SummerSlam 2002 is one of my favorites. It featured the return of Shawn Michaels and the beginning of “The Next Big Thing” Brock Lesnar. Every match on this card was entertaining including the opening bout between Kurt Angle and Rey Mysterio.

This was Mysterio’s WWE pay-per-view debut and it did not disappoint. Mysterio’s high flying style meshed perfectly with Angle’s technical style. There were many innovate spots, including the very beginning of the match when Angle is waiting for Mysterio to make his way to the ring and Mysterio springs on Angle from behind leading into a flurry of offense from Mysterio. Another unforgettable spot was Mysterio’s somersault dive over the referee onto Angle on the outside.

There were some other outside elements that made this match great. First the commentary of the match. Micheal Cole and Tazz did a great job calling the in ring action and explaining why these two were going head to head. There were no inside jokes or constant bantering. It’s what WWE commentary needs to return to. Another outside element was the crowd. The Long Island crowd was electric. From the “You Suck!” chants to the “Holy Sh*t!” chants, the crowd was invested in this match and didn’t seem to care who won the match.

This was the perfect match to kick off such an eventful SummerSlam. The back and forth action, innovative reversals, and false finishes sent the audience on an emotional rollacoaster. The only thing that could have made this match better was a few more minutes. – Jeremy Donovan

Quite frankly, there have been a lot of cruiserweight matches, but not only is this the greatest of them all, it’s arguably the best WCW match ever.

At Halloween Havoc 97, Eddie Guerrero and Rey Mysterio then Jr. met in a mask vs. title contest that would have broken twitter in half had it happened in 2014. Both men operated in ring as if they gave zero f*cks about their own wellbeing’s.

Possibly the most memorable spot happened when Rey Mysterio sunset flipped over the top rope to the outside of the ring into a hurricanrana, ON THE FLOOR….IN 1997.

Eddie Guerrero was at his first peak as a performer. Upon turning heel in WCW, he wets his hair, ditched the singlet and morphed into possibly the most talented in ring performer on earth. Unfortunately, WCW didn’t capitalize on Guerrero because WCW. The match ended when Rey reversed a high angle slam to a hurricanrana off the top rope. If it looks crazy reading that last sentence, it’s because it was.

I like to think both Eddie and Rey walked through the curtain and told the rest of WCW to top that. Something they would never do. – Richard Latta II

It’s the defining match of my childhood. At a time when the WWE was rebranding itself, two men sat on another tier from all the other performers on the roster. They were The Heartbreak Kid, Shawn Michaels & Bret “The Hitman” Hart, the leaders of the New Generation.

After some delay due to personal injuries, and test runs with other guys as champion, (Diesel, Bob Backlund, Yokozuna) the stage was set for WrestleMania XII to the backdrop for one of the most unique main events ever.

Shawn was coming in as a two-time Royal Rumble winner, with a mountain of momentum. At the time it was an absolute toss-up as most fans would have been fine with either man winning.

What we got was a 62-minute masterpiece, which went down as the Steamboat vs Savage of its generation, (As the years pass, younger generations won’t hold it in high esteem.) but on a higher level for greater stakes. It set the tone for the rest of Bret Hart’s time in WWE, and sprung pro wrestling’s greatest performer ever to the World Championship Level.

Nevertheless, I’m not saying you have to watch this right now, as part of the #SSP (Social Suplex Playlist) but this is required viewing for anyone that calls themselves a wrestling fan. – Richard Latta II

At a time, often referenced as the “Summer of Punk”, things we’re on a streamline for the WWE crowning a new face for its future endeavors. CM Punk had a many of run-ins at this point with the likes of John Cena, Triple H, Kevin Nash and the list goes on. So walking into Madison Square Garden at Survivor Series with such buzz, the match between Alberto Del Rio and the Best in the World CM Punk for the WWE Championship was destined to be a classic.

And it was. From tough in your face chops, kicks and fan reactions, Punk and Del Rio told a story of a prince of thieves being toppled by the rising hero of a new era. With a lot of close calls, an unstoppable finish and visit to the past with The Fink! It was the perfect beginning to the longest reign in a Quarter Century.

It was pure… destiny. – Jeremy LaBoy

This was for the WCW United States Heavyweight Championship, which holds the same lineage as the US Title held by Rusev in WWE today. It took place at the 1997 WCW Uncensored Pay-Per-View event and was far from the first time these superstars met in the ring. “The man of 1,000 holds” himself, Dean Malenko and the legendary Eddie Guerrero wrestled countless bouts in their days in Paul Heyman’s ECW, trading the Television Title on separate occasions. As a matter of fact their matches in ECW gained so much popularity that their ECW feud is cited as a large part of the reason WCW came to be interested in the competitors, so they could re-create the feud on the larger stage that was World Championship Wrestling, which brings us to Uncensored 1997.

While many question some of the management tactics of WCW brass in hindsight, someone knew what they were doing when they gave these men nearly 20 minutes to wrestle. As expected, they put on a veritable clinic that aspiring technical wrestlers would do well to study today. The two had bad blood leading into the bout as Guerrero inadvertently caused Malenko to lose the Cruiserweight title to Syxx (known widely as X-Pac) just one month earlier at SuperBrawl VII. For better or worse, Syxx played a part in the finish of this match as well, which would not be the last time Malenko and Guerrero met in the ring, but it definitely was one of their great outings. – JC Howard

I know, I know, Chris Benoit never existed…but let’s suppose that he did. This match was to determine the first ever WWE Tag Team Champions, the Tag Team title developed by Smackdown General Manager Stephanie McMahon for her show when the World Tag Team Championship was declared Raw Exclusive. Early October 2002 Stephanie McMahon announced an 8-team tournament to crown the first Champions and competitors included Los Guerreros, Billy & Chuck, and more. Angle and Benoit were reluctant partners as they were just coming out of a feud but were forced together for the tournament—no one believing they could survive as a team. As it turns out, they defeated the teams of Billy Kidman/John Cena and Los Guerreros to earn their spot; Edge & Mysterio beat Brock Lesnar/Tajiri and Rev. D-Von/Ron Simmons which meant the Championship would be decided at No Mercy 2002 Edge & Rey Mysterio vs. Angle & Benoit.

Of course Edge & Mysterio walked in as the fan favorites, but Chris Benoit and Kurt Angle are not known as sloths in the ring. WWE’s only Olympic Gold Medalist and the Rabid Wolverine are the real reason to watch this match. The chemistry between the two and the tension was palpable throughout the tournament; hard tags, grimaces and sneers were exchanged between the superstars, but they held it together to avoid a year suspension threatened by Stephanie McMahon. But when the gold was on the line, they held it together in a different way altogether. – JC Howard

Sting and Lex Luger were two of my favorite wrestlers in WCW. When I was little I couldn’t pronounce the words “Total Package”, so I would always end up calling Luger “Topacke”.

Sting and Luger have a storied history in WCW. They’ve teamed and feuded several times through out the history of the southern promotion. In the early 90s both men were racing to the top of the card. Both men trying to prove why they should be the new face of WCW. In 1991 When Ric Flair went to the WWE, this left a void for Sting and Luger to fill. With Flair gone, they had the opportunity they were looking for.

Luger turned heel and won the Flair’s vacant World Heavyweight Championship. He dominated 1991 with Harley Race at his side. Despite being the World Champ, Sting was becoming the focus of WCW. This leads to their epic showdown at SuperBrawl II.

The match has a very old school feeling to it. The pace of the match was slow and methodical. Both men controlled the crows with every move. I thought it was interesting to show that Sting was so frustrated with Luger that he started doing heel tactics, like raking the back. With Luger on his way out the company, SuperBrawl II was the christening of Sting as the new star in WCW. – Jeremy Donovan

What matches do you want to see on the next volume of the Social Suplex Playlist? Sound off in the comments below.