Taiji Ishimori: The Real Best of the ‘Super’ Juniors? 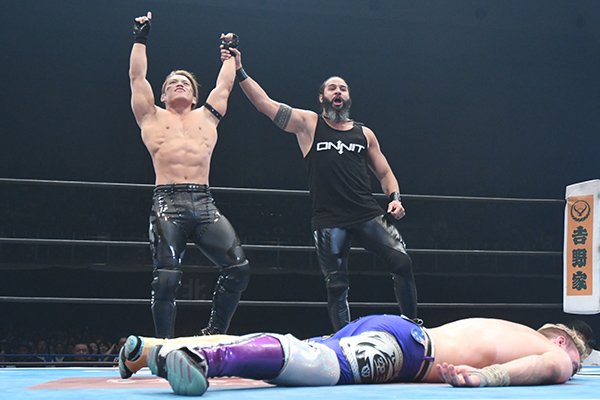 For the last few weeks we’ve been promised that ‘Bone Soldier Will Return’, and on May 4th, return he did, this time around at 5’4, complete with washboard abs and a look most of us would probably kill for. My personal love for the guy aside, the new Bone Soldier was Taiji Ishimori, one of the most notably successful Juniors in Japan outside of NJPW, and a recent star on US soil over at IMPACT Wrestling, the home of a gripping feud between Ishimori and Matt Sydal, and the feud that introduced the former X Division champion to me.

What got me hooked? His style. Competing with the human definition of ‘small dog syndrome’, the most jacked small guy in the business has blistering pace, strong offense, and unmatched athleticism. He commands the ring and never fails to put on a believable and enticing performance, hence why the NOAH crowd took to him so much in his 12-year tenure with the company, and he still gains numerous fans worldwide to this day. His accolades speak for themselves, and as part of the Bullet Club, there’s no doubt Ishimori’s stock is set to rise further.

The perfect time to cash-in on one of the hottest Juniors in the world (In a literal and business sense)? The upcoming Best of the Super Juniors tournament. Would I have Ishimori win? Absolutely. It’s a fresh challenger, a fantastic talent, and most importantly, someone with a lot of mileage as the Champion. With dream matches against Kushida, Will Ospreay, Hiromu Takahashi, Dragon Lee, Marty Scurll and even the likes of a great match against a less established man on Japanese soil like Flip Gordon potentially on the horizon, the scope is endless, so why not go the whole nine yards and put that sweet sweet strap around the waist of the people’s Bone Soldier.

At 35, Ishimori is going to be an important figure in the Juniors, a legitimate star with a serious pedigree whilst occasionally being used as an experienced and reliable tool to put younger guys over with impressive matches and captivating performances. He’s a money maker, and the cliché ‘human highlight reel’ can easily be applied without sounding like wasted hyperbole. Wrestling is an art, and Ishimori is one of its finest artists, and as I was doing my homework on the 16-year veteran, I was continuously impressed with the versatility and big fight feel he brought to every match. If you’re looking for a nice background after his unveiling as Bone Soldier, this Reddit user has you covered, providing an excellent list of viewing including some of his work last time he stepped into a New Japan ring. He’s worth getting excited for, and with an interesting and potential-filled gimmick (even despite its failure last time around, but that’s most likely due to the man behind the mask), the sky is the limit.

What would I do? Seeing as though he’s already competed against Kushida, I’d keep them apart in the upcoming BOSJ, (a story of avenging previous woes always suits higher stakes), and place him in a block with Bushi, Kanemaru, Yoh, Flip Gordon, Dragon Lee, Tiger Mask IV and Marty Scurll (got to continue the Bullet Club civil war somehow). It allows for Ishimori to have consistently good matches without facing too much star power whilst also giving Ospreay a reason not to make the finals by stacking the other block high with stars. With the potential for an unbeaten run, Ishimori should defeat Scurll to play up the idea of being the only credible Junior in Bullet Club, breezing his way to the final to face LIJ’s hottest Junior, Hiromu Takahashi. With a clear potential for a match of the year candidate, there’s no doubt these two bonafide stars would put on a clinic, and in defeat, Takahashi would still come out of the bout with an even higher amount of credibility.

As my booking clearly suggests, I’d have Taiji win the strap at Dominion, and go on to have further successful defenses against the likes of Marty Scurll (It screams Kizuna Road Main Event), Bushi, Ospreay etc until we finally reach Kushida. By this time we’ll probably be at the Destruction tour, so I’d happily let Kushida get his hands on the belt for a 6th time, reliably carrying it through the Winter months into WrestleKingdom, when Ishimori can finally have his rematch. In a cathartic moment, the only acknowledgeable Bone Soldier can get his big win, avenge his previous defeats to Kushida, and come away with the strap once more. From there, you’ve got more than solid foundations to go in numerous directions, and I’ve every trust no matter how Gedo chooses to book this gem of a performer, he’ll make a success of it.

In summary, ride the wave, indulge in every match you can find, hop on the bandwagon, and prepare to get invested in Taiji Ishimori. It’ll be worth your time, and you won’t be let down, I promise.