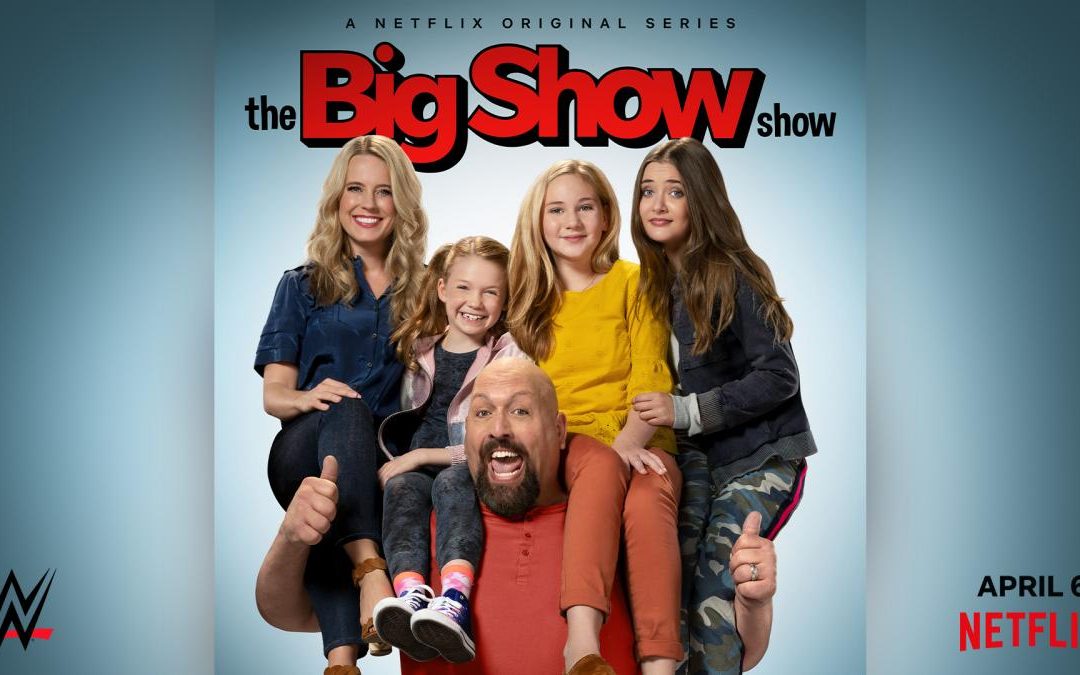 Why am I, a 30-year-old, male wrestling fan writing a review about a family sitcom and not about a 5-star match I found on YouTube? I’m more qualified to talk about TV sitcoms number 1 and number 2 why wouldn’t I?

This all started with talking to some of the guys about the show. Truthfully I had no real plans to watch the show until joking that I would write a review of it. Then one thing leads to another and here we are! Now Josh, The Big Show Show came out a while ago, why are you so late with this review? Because I made the mistake of trying to watch this show around when my wife watched with me. That can delay things as she said she needed to spend her time taking care of the kids or something. I wasn’t really listening.

Before I get started on the review of The Big Show Show Season 1, how did we get a WWE wrestler starring in his own family sitcom? Let’s take a look.

Back in February of 2019, it was announced that WWE Studios would team up with Netflix to produce family-friendly content for the streaming platform. The first production was the Netflix original movie The Main Event (haven’t had the courage to watch that one yet, but if enough of you ask for it, you shall receive it). Now that The Main Event has been launched and so has The Big Show Show and given the success of the latter (top 10 in the US on Netflix) I can only assume that more WWE family content, as well as TBSS Season 2, will be forthcoming.

I will note that for this review, I am trying to not spoil anything, but there will be some plot from the first episode so you can kind of get the tone of the show and understand how this thing unfolds.

Enter in Paul Wight starring as himself The Big Show (this is the part where I tell you I’m not a huge fan of Show, I think his name confused me as a youngster, I mean is it really a name) as he and his family adjust to his life post wrestling right here in Tampa Bay. The plot of the show is given to us in exposition form by Show’s oldest daughter Lola (Reylynn Caster) as she reveals that she is moving to Tampa to live with her dad and step-mom since her mom got a job in Belgium. Lola’s mom is seldom mentioned again in the series and it is never brought up why she and Show aren’t together and we never see her, she exists only for the plot.

Switching scenes The Big Show gives more exposition to his wife Cassy (Allison Munn) that he has to pick up Lola from the airport, but not before they break it to middle daughter Mandy (Lily Brooks O’Briant) that because of Lola’s arrival she would need to share a room with the youngest daughter – and star of the show, JJ (Juliet Donenfeld). I don’t think I need to tell you how the rest of the first episode goes because it is an incredibly basic step sibling sitcom plot (one I probably first saw watching step by step, Al is still at the top of the list for me, I was pretty into that tomboy look at the time).

Now that we’ve met the family and the living situation is taken care of it’s time to meet our side characters who never really get fleshed out. We learn that Cassy is a real estate agent who has a terrible assistant named Bennett (Asif Ali) and The Big Show is best friends with the man who manages the gym he goes to Terry (Jaleel White, yes, that Jaleel White). Neither one of these characters really matters as the show goes on which is a shame because Jaleel White is still super likable and really deserved a better role than the stupid buddy (picture Urkel without being a genius and less destruction).

I really expected that there would be a lot more wrestler cameo’s than we got and that they would be spread around the season. Instead what we got was a decently enjoyable episode that features Mark Henry, Mick Foley, and Rikishi singing Backstreet Boys together and it is so bad it’s good and truthfully these 3 should have been in more episodes.

In a season that feels long despite having only 8 episodes at less than 30 minutes each, it was a decent watch through. There’s nothing groundbreaking here (unless you count the number of times Big Show breaks a door/table/chair etc) and the plots are all really basic TV. While it was cool to see my home town area get some scenery shots I wished they would have had more reference to Tampa other than a throwaway line about Busch Gardens and a C plot of an episode be about sinkholes (I’ve never known anyone to have a sinkhole day off from school but I guess it could happen).

There is some heart to the show and like I mentioned briefly before JJ is a scene-stealer even if her lines are all one-liners. All in all, it’s too generic to be good but doesn’t do enough to be bad. We got a lot of time to spend in quarantine left to go it seems and so if you need a break from Disney+ with the kids, go ahead and throw on The Big Show Show (can’t say I recommend it for you solo marks out there).