The Match That Could Have Been: Kenny Omega vs Shooter Umino 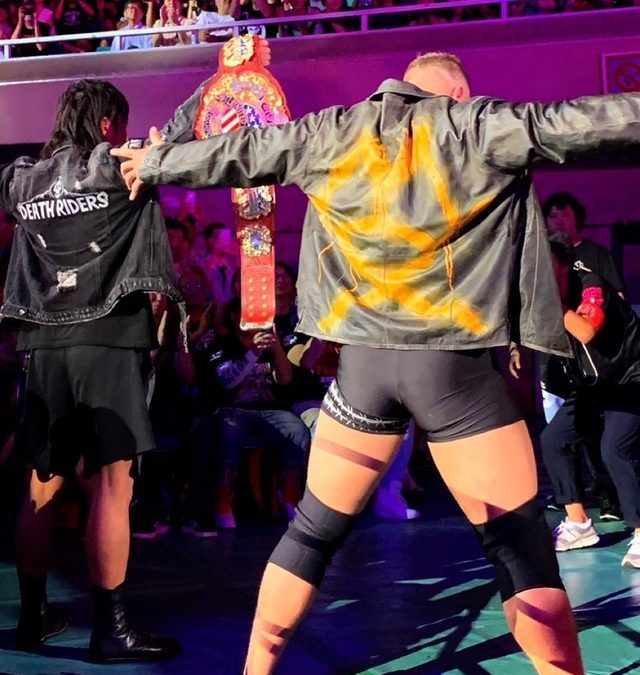 When Mox went down from MRSA AEW had to scramble to find a last-minute replacement for Mox. They even did a bit about it on Being The Elite where they announced PAC as the replacement.

Kenny would go on to do a “shoot” promo against Mox claiming he was unprofessional and mocking him for emulating him and trying to wrestle in Japan. He would ask him about his G1 tour “did you win?” And follow it up by stating that he did on his first try.

Some people speculated that a promo like this was particularly heelish and that it could be foreshadowing a turn for omega. I tend to believe he’s still too popular and like the Bucks and Cody, he tends to enjoy his current tweener role.

Had they not picked PAC and had their relationship with New Japan been different things could have played out much differently. In the same bit on BTE mentioned earlier they made a crack about Ibushi so I think if they could work with NJPW more they would.

They could have continued to build upon this match if they had chosen Umino to replace Mox. The storyline would make sense after the promo Kenny had shot. Umino coming to defend the honor of his mentor and face Kenny Omega.

The outcome would be obvious with Kenny winning but fans of New Japan know that the Young Lions put on some of the best matches on losing efforts. They are throughout the year put in against more seasoned wrestlers to lose and learn the craft so there is no doubt that Shooter and Omega could put forth the psychology to tell a great story in the ring.

This would also be a great excursion opportunity for Umino. New Japan wouldn’t get hurt if Shooter would fall to Kenny Omega. If anything it would only boost him up in terms of credibility if he put on a believable and hard-fought bought against him. This is the best example of someone looking good in defeat.

How’s this for a closing sequence? Kenny has dominated the match for the most part so far but Umino has gotten his fair amount of shots it. We are closing at between 15 and 20 minutes in and even though he’s been getting killed with V-Triggers, Umino slowly stands up to Kenny screaming and showing his fighting spirit. After an exchange of elbows, Kenny runs to the ropes but Umino is holding him by the elbow and pulls him into his Fisherman Suplex.

Kenny kicks out at 2 but Umino grabs him again and with theatrics puts him into the setup of Moxley’s Paradigm Shift. At this point, the crowd should pop at the mere suggestion that Umino would utilize his mentor’s finishing move.

Since we’re fantasy booking I see Kenny garnering some heat by simply going down to his knees same as he did against Okada to counter the Rainmaker. Normally this spot would not be disliked but the fans wanting to see Umino land the Paradigm Shift would not be pleased.

Having countered the finisher attempt by sandbagging Umino the finish could be as simple as Umino getting frustrated and going off the ropes only to catch a final V-Trigger into a One-Winged Angel for the finish.

Post-match Kenny could cross the line and put shooter through a table or they could do an injury angle which would only heat Mox up. Maybe we get a scathing promo from Mox on AEWs YouTube show hyping up their coming match to an even higher degree.

AEW didn’t make a bad choice by any means. Pac vs Omega is going to be great. There was an opportunity to add more to the feud of Moxley vs Omega but unfortunately, the relationship between New Japan and AEW wasn’t there. Even if it was the opportunity to do Kenny and Ibushi may have been too tempting as well.

They would have had to balance out whether they felt it was worth it to try and continue fueling the storyline for Mox and Omega or between pleasing fans with a big-time name. I can fantasy book all I want but even if the cards were right and there was a happy relationship between the two companies this matchup probably would never happen. Even though it would be amazing!