The Raw Gauntlet: A Storied Masterpiece 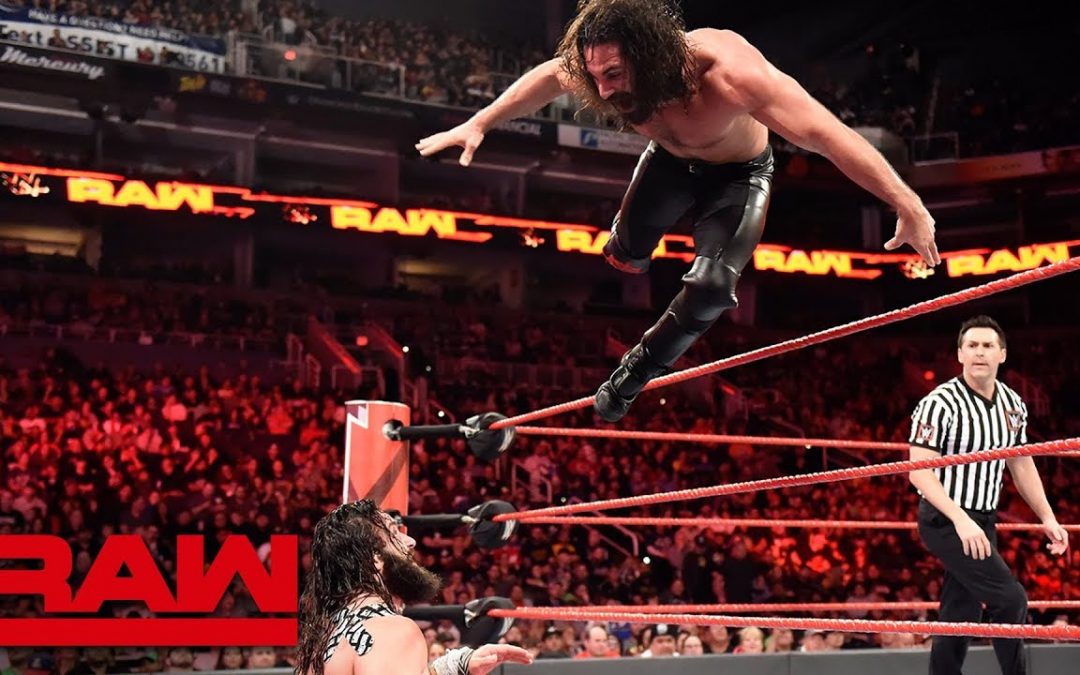 On Monday night’s go-home show, with the gauntlet match between seven men who will face each other on Sunday night in an Elimination Chamber match to determine who will face the Universal Champion at Wrestlemania, WWE set a few new records. Not only was it the longest match in Monday Night Raw history, but it was also the longest that’s ever been contested in WWE, in all its incarnations; one hundred and seven staggering minutes.

Another record set is one that should not go unnoticed. Seth Rollins, involved in the match for sixty-five minutes, now proudly boasts to have put in the longest performance ever on Monday Night Raw. While this is a formidable feat and highlights Rollin’s physical stamina, his character performance is what should be the takeaway from this night and not the length of time he was in the ring.

Over the course of his grueling shift, Rollins was able to tell three different stories with three different men, yet at the same time encompass it all into one excellently told character piece.

Seth reinforced my belief that he is the most organic “babyface” WWE has in its employ today.

His heroic display wasn’t the only exemplary depiction of character on offer, however, as the whole near two-hour encounter was full to the brim of what has made each of the upcoming Chamber match competitors so compelling in the build to the event itself.

Being interviewed in the ring by Renee Young prior to the match, Roman Reigns flatly stated that he wasn’t worried about being first in the gauntlet, and was more concerned with his chances in the Chamber on Sunday, going on to say how he feels he will be the one to do what the rest of his competition can’t; beat Brock Lesnar. However, Roman’s self-assuredness hasn’t won him many singles matches on PPV (Network Specials) in quite some time. Despite this, Roman remains confident in his quest to maintain his “yard”. The person to quickly dampen Roman’s arrogance was his Shield brother, Seth Rollins.

The matchup between the two was evenly matched for the most part, as would be expected, thanks to how familiar they are with each other’s offense. The encounter stretched on, which began to peak my interest, as I was well aware that this wasn’t billed as a singles match. Perhaps, though, WWE was trying to convey how evenly matched these men are, as the blocks and reversals increased towards a crescendo. Reigns may be cocky, but he was caught unaware due to a surprise counter roll up, and a dogged determination that has boiled to the surface within Rollins since his luck all but ran out in tag team competition.

Moving on, for the first time in what seems like forever, we saw a motivated John Cena. That “Cena vs Internet Darling” mentality must have been front and center in Cena’s mind during this match, as he desperately latched on to a world he is quickly losing a grip on, something he has made reference to in recent weeks and again in his post-match interview with Renee. Cena’s desperation saw not only a multitude of the usual finisher attempts but also saw him also literally throw Rollins as far away from the ring as possible, in the hopes that a count out victory would spare him from having to continue wrestling a relentless Rollins. This may have played on Cena’s increasingly paranoid mind, as Rollins mustered up the last of his incredible reserves to put away the sixteen time World Champion.

Already at this point, Rollins has delivered one of the most heroic performances, outside of a Royal Rumble match, in recent memory. Unfortunately, his valiant efforts against the two faces of WWE were too much for him to be able to offer any sort of competition against the enigmatic Elias. Raw’s loner went in for the kill almost immediately as he landed brutal kicks into the now battle fatigued Rollins’ torso, and the easy target that is his surgically repaired knee, before ultimately applying his finisher. Elias showed no remorse in ending the possibility of a truly legendary Iron Man performance from The Architect, but The Drifter was no match for the next entrant.

Who better to take over proceedings and replace the exhausted Rollins than the man he has butted heads with since, in reality, all the way back at Summerslam 2016. Finn Balor was sidelined for months at the hands of Seth Rollins, who would a short time later accompany Balor on the treatment table. Their paths have crossed intermittently since both of their returns, but there is currently a combustible relationship between them that is close to igniting. Seth may have felt a strong bitterness as he limped his way up the ramp with the help of officials, while the fresh-faced and ready for action Balor sympathetically(?) applauded his efforts. Any thought for Finn’s fellow man didn’t last long, however, as he made quick work of Elias.

On a night full of on-point character performances, Miz knocked it out of the park yet again as he used the advantage of manpower to pounce on Finn immediately following his introduction to the match. He would capitalize on this with vicious kicks to the prone Irishman who, despite occasional flurries of trying to overcome the odds, could not progress in the match, once again thanks to Miz’s trademark dirty tactics.

The execution of what followed was carried out to perfection. The announcement of Finn’s elimination from the match was followed up with a close-up of Miz’s smug and sneering face. So far, so Miz. Then, with one entrant left, fans in the arena and at home didn’t need to hear The Monster Among Men’s music to know that the impending consequences for the Intercontinental Champion were very grave indeed.

For months now, Bo Dallas and Curtis Axel have intervened on Miz’ behalf, whether in the ring or during a beat down in MizTV segments. Before that, his wife was the one who came to his aid through a variety of underhanded tactics. However at that very moment, when the inevitable was near and Braun was about to rain chaos down on proceedings, Miz probably never felt more alone in his whole career.

Braun came down and did what he does best; inflict irreparable damage upon anyone and anything that happens to be in his way. His signature tactic of mayhem is fairly limited in the grand scope of wrestling prowess. Nevertheless, it seems that a new string is added to Braun’s bow every week (no cello related pun intended). We’ve seen Braun adopt a frightening speed in the ring when advancing upon his prey in the corner. But Braun literally chasing Miz around the arena with a sickening velocity for such a behemoth of a man is truly a sight to behold.

Miz came close to successfully incorporating his distraction strategy yet again with a shock victory, but for someone as dominating as Braun, a sniveling heel and his lackeys were no match. With a solid defeat over Miz, and being the victor in this epic, Braun goes into the Chamber match as a strong favourite, and based on his frequent decimation of Monday Night Raw’s roster, announce team, and furniture, it makes perfect sense that Braun comes off as the strong favourite for the night.

This segment with Braun staking his claim as the one to face Brock Lesnar at Wrestlemania was the closing of a perfectly booked match. Any momentum Roman Reigns was looking to gain has been quelled.  Braun made his intentions known to anyone with eyes. Cena’s crisis in confidence could come to a head at any point. Finn will have a score to settle with Miz which could clear a path for them to face off at the Show of Shows. And Elias is Elias, which to be fair, he does so well.

With regards to Seth Rollins’ career-defining performance, make no mistake; this should not be an impulse positive reaction from the masses. Seth Rollins did something truly special on this night and should be looked upon favorably in the memory banks, not just the record books.

To have two of your three allotted hours dedicated to one match on a go-home show was a bold move from WWE, but from where I stand,  the risk paid off in leaps and bounds. It has greatly enhanced my anticipation of the upcoming Chamber match, which was already high, to begin with.

I’ve thought for a long time that one of WWE’s strengths lies in their booking of multi-man matches. This Elimination Chamber should be no different. I don’t imagine another bout of such a marathon length will recur, but if what took place on Raw is condensed into half the time, then this could easily be the best showcase of organized chaos that WWE has ever produced.

Did you enjoy the gauntlet match? Did Seth’s performance change your opinion on him heading into Wrestlemania? Feel free to drop your comments here or wherever you read this on social media. You can find me on Twitter, and in Social Suplex’s Facebook group.