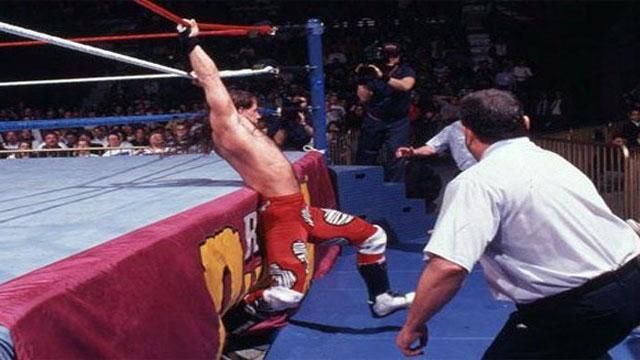 The Royal Rumble is always one of the most exciting matches of the year. The Rumble officially kicks off the road to Wrestlemania. The seeds are planted for several rivalries and the Wrestlemania main event is set. There are also several other factors that make the Rumble exciting such as figuring who drew number thirty, Kofi Kingston’s escape from elimination spot, and surprise entrants. Even though the Rumble is a must watch every year there are a handful of Rumbles that told a story that emotionally captured audiences. When it was all said and done, you were excited with who won and how they won. Today we take a look at the top 10 Royal Rumble wins thus far:

Number ten goes to “Hacksaw” Jim Duggan. Duggan won the very first Royal Rumble in 1988. Duggan entered the Rumble at number thirteen. Coming down to the end Duggan overcame a two on one situation with One Man Gang and Dino Bravo. Unfortunately for Duggan, he did not receive a World title shot, but he will always be the first Royal Rumble winner. HOOOOO!

I couldn’t create the list without having “Stone Cold” Steve Austin on the list. Austin opened a Royal Rumble sized can of whoop ass in 1997, 1998, and 2001. The most impressive and memorable win was from 1998. Before the Rumble began it was reported that Austin was attacked by Ken Shamrock. It was expected that Austin wasn’t going to make it to the Rumble. Austin didn’t let Shamrock stop fate. The infamous glass shatter happened at number twenty four. All the competitors in the ring looked towards the entrance way, preparing to eliminate Austin. To everyone’s surprise Austin jumped out of the crowd and started throwing people out the ring like they were yesterday’s trash. In the end Austin eliminated seven competitors, including long time rival The Rock. Austin punched his ticket to Wrestlemania XIV, where he defeated Shawn Michaels for the WWE Championship and officially rang in the Austin era.

Before he conquered the Streak, Brock Lesnar conquered the 2003 Royal Rumble. Unlike other Rumble competitors Lesnar had a a Rumble qualification match earlier in the night against Big Show. After defeating Big Show, Lesnar entered the Rumble at number twenty nine. He eliminated Charlie Haas, Shelton Benjamin, Matt Hardy and The Undertaker. This win set up Brock to face Kurt Angle for the WWE Championship at Wrestlemania XIX.

Going into 2007, The Undertaker had done it all in WWE. He won the WWE Tag titles, WWE Championship, main evented Wrestlemania, and became the master of Hell In A Cell. The one thing that was missing from his resume was the Royal Rumble. Seventeen years into his WWE career and he never won the Rumble. The Deadman changed that at the 2007 Royal Rumble. Before Taker eliminated Michaels, the two gave us a preview of Wrestlemania XXV and Wrestlemania XXVI. With this win Taker was the first man to win the Rumble from number thirty.

There’s nothing better than an emotional comeback from an injury. Triple H returned from a serious quadriceps injury weeks before the Rumble and announced he would be participating. Winning the 2002 Royal Rumble was not going to be easy. There were several top stars including Stone Cold, Kurt Angle, Rob Van Dam, and The Undertaker. All of them with intentions of main eventing Wrestlemania X8 against The Undisputed Champion, Chris Jericho. Triple H entered at number twenty two and twenty three minutes later won by eliminating Kurt Angle. The Game went on to defeat Jericho at Wrestlemania X8 to become the 2nd Undisputed Champion.

The 2006 Royal Rumble set the stage for the biggest underdog story in Rumble history. Mysterio was the smallest competitor and entered the Rumble at number two. Mysterio would literally have to outlast all twenty nine other competitors and achieve his dream. Mysterio didn’t let the odds or his size be roadblocks to his destination of Wrestlemania 21. With the spirit of his best friend Eddie Guerrero watching, Mysterio endured the Rumble for 62 minutes. The final chapter of Mysterio’s quest was complete when Mysterio defeated Kurt Angle and Randy Orton at Wrestlemania 21 and became World Heavyweight Champion.

I am not the biggest John Cena fan, but Cena stole the show at the 2008 Royal Rumble. In October 2007 Cena suffered a torn pectoral muscle and was it expected to be out seven months to a year. The IWC rejoiced as Cena was stripped of the WWE title. Everybody seemed excited for a Cena-less Royal Rumble and Wrestlemania because they couldn’t see what was going to happen. One of the fun guessing games of the Rumble is to figure out is going to be number thirty. When the countdown clock hit zero for number thirty, Cena’s music hit. At first I thought it had to be a mistake, there’s no way Cena is healthy. Then Cena came out with a smug look on his face and the arena erupted. Cena made an astonishing comeback from career threatening injury. He charged the ring and began to fight for his Wrestlemania spot. After eight minutes Cena triumphed and punched his ticket to Wrestlemania 24.

I know WWE wishes they could erase Chris Benoit from our memories, but no matter how hard they try to remove him from history wrestling fans will always cherish what Benoit contributed to business before that awful weekend in June. At the 2004 Royal Rumble, Benoit had a tough task. Due to conflicts with then Smackdown General Manager Paul Heyman, Benoit was forced to enter the Rumble at number one.  The Rabid Wolverine chopped and German Suplexed his way through the match. In the end, Benoit eliminated Big Show and became the second man in history to win the Royal Rumble from number one. He also broke Bob Backlund’s longevity record. Benoit went on to Wrestlemania XX to defeat Triple H and Shawn Michaels to become World Heavyweight Champion.

In the early 90s Ric Flair had a short but, impactful stint in the WWE. The WWE Championship was vacated due to controversial finishes in title matches between Hulk Hogan and The Undertaker and a new champion would be crowned in the 1992 Royal Rumble. Flair was one of thirty men fighting for the honor of being champion. The Dirtiest player in the game entered the fray at number three and was set out to prove they he can stay up all night long. Flair outlasted Randy Savage, Jake Roberts, Hulk Hogan and several other future Hall of Famers to become the nineteenth WWE Champion.  For all the Ric Flair fans, check out 10 Things You Need To Know About Ric Flair’s Original WWF Run. WOOOOO!

Number one on our list goes to my favorite wrestler of all time, the Heartbreak Kid Shawn Michaels! The 1995 Royal Rumble was the first pay-per-view I attended. Despite Shawn Michaels being a heel at the time he was still my favorite and four years old I was excited to see the Show Stopper. The odds were stacked against my hero. Michaels drew number one and was going to have to last an hour with twenty nine other competitors. Every time Michaels came to close to elimination I lost my breath. It came down between Michaels and the British Bulldog. Bulldog used his strength advantage over Michaels throughout their to duel. Bulldog nailed Michaels with a big clothesline sending Michaels over the rope. Everybody in the USF Sundome thought that Bulldog had won and so did he, but Michaels was hanging to the rope and only one of his feet had hit the floor. Michaels skimmed the cat and eliminated Bulldog who was celebrating a premature victory. With this win Michaels earned the right to have Pamela Anderson as his manager for Wrestlemania XI and a WWE title shot against his former bodyguard Diesel.

What is your favorite Royal Rumble win? Sound off in the comments below.