Latta’s Lariat #9 : Was Black Ninja The Best Video Game Wrestler Of All Time? 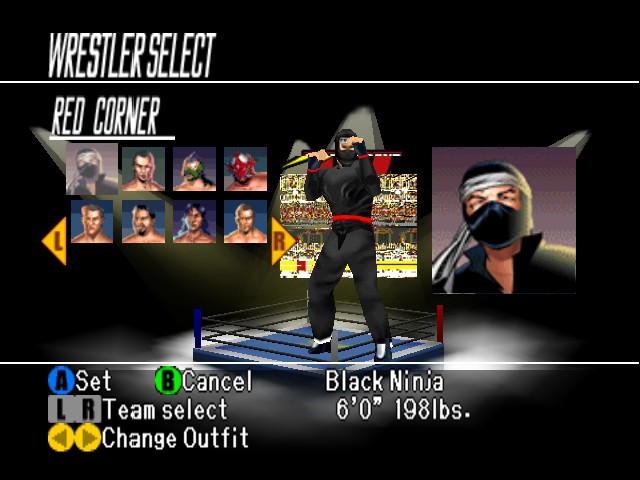 WWE 2K18 is set to release in late October to much fanfare like every WWE game. I’m sure there will be some career mode, or version of WWE Universe which will be really cool. The graphics have never been better, the characters never so diverse. However, I’m fairly certain that the game will be missing the greatest single character ever in a Wrestling video game. Black Ninja!

I was first introduced to Black Ninja in WCW vs. The World on PS1, ages ago. The blocky characters didn’t stop me from selecting the Ninja that was all the way on the right side of the character select screen who was faster, and more offensively dynamic than everyone in the game. I used Ninja to beat every league challenge in the game with ease, but things would take a greater leap forward the following year in WCW vs N.W.O World Tour.

Black Ninja in that second game was a revelation to gamers. The top rope was now able to be freely jumped from. Technically he was terrific, as he was able to reverse the moves of anyone, and his running grapples and attacks made it to where even the biggest novice could get victories with him. At that age, I wasn’t sure if Black Ninja was actually based on a real wrestler, which I’ll get to in a moment. He was a faint memory of someone I think I saw during the summer of 97. Turns out he was in WWE for a few matches against Taka Michinoku in July I’d later find out, but it was a situation where if you missed a few shows, you’d never see him again.

As I alluded to, Black Ninja was based on the legendary junior heavyweight, The Great Sasuke. He was a participant in the famous J-Crown tournament, and one of the biggest daredevil wrestlers of all time. He dressed like a literal ninja, and his feet were as dangerous as his hands. I mean who were we supposed to pick in that game compared to him? Rick Steiner? Give me the ninja.

Around the same time, I was captivated by the WCW Cruiserweights who were highflying during the 9PM hour of Nitro. With Ninja I was able to top the classics on my stepbrother’s N64, with his lightning speed and highflying. I’m pretty sure he wasn’t everyone’s favorite character, but I don’t see how there was an argument when asked who is the best.

Not only did he have the devastating flying attacks, he had a double powerbomb special move that either knocked guys out, or turned into an instant pin attempt.

The character of Black Ninja was so much more ahead of its time than THQ will ever get credit for. I mean they were only basing this guy on a human that actually did this stuff, but to most kids the human element was removed. This was some otherworldly Mortal Kombat type dude that was unleashed on helpless slow wrestlers. In my book, his imaginary overall would have been around 119 of 100.

In a way, he was the wrestling answer to NBA Live’s “Roster Player.” For those who don’t know, Roster Player was Michael Jordan when he refused to clear his name for NBA games. Roster Player wore #99 and started at Shooting Guard for the Bulls and killed everyone…JUST LIKE BLACK NINJA.

I’ve now rom’ed pretty much every N64 Wrestling game ever created to my cell phone, and of course I selected Black Ninja first. Naturally, the question was, would the magic still be there? Of course it was, but it didn’t last as I found out many of the other characters were based on incredible wrestlers they couldn’t clear names for. Black Ninja was now the opposite of what he was back then, just like everyone else.

So while I’ll select Ninja from time to time, for the most part I leave him back in 1997, where he was the greatest video game wrestler I ever played with.*

Who are your best video game characters?

*I still download him in every WWE 2K Game just for the novelty. Someone will create him until the end of time.