Who’s Next? Who Goldberg Should Face if He Does Go to All Elite Wrestling 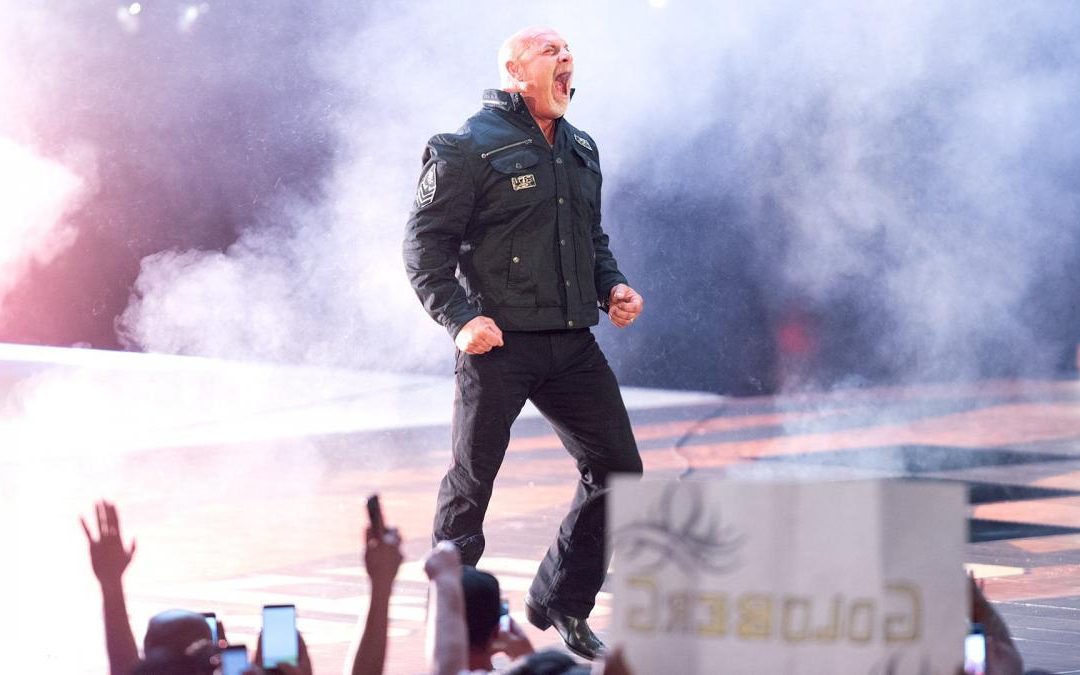 So if you’re a wrestling fan who’s into the “who did __ follow on Twitter today?” game (and if you’re not I highly recommend it, it’s exhilarating) you probably saw this yesterday:

The man they call “Goldberg” followed Cody & The Young Bucks’ (and perhaps most importantly Tony Khan’s) new promotion, All Elite Wrestling, in addition to following Double or Nothing.

It’s easy to look at this and say “well, it’s probably just a big name pro wrestler following what is currently a headline maker in pro wrestling…and Twitter follows ultimately mean nothing, right?” 1) Sure, it could be that way, but 2) (and this is extremely important) Where’s the fun in that? Isn’t it a lot more entertaining to sit here and fantasy book matches between maybe the least indieriffic wrestler ever and a bunch of indie darlings? Well I certainly think it is, which is why, below, I’ve compiled a list of 5 people I think could face Goldberg at AEW’s first show, Double or Nothing.

I’m not the biggest fan of saying “Oh this guy has got the look” in wrestling, but let’s be real here: This is Goldberg we’re talking about, a wrestler with one of the best looks ever. And if he’s coming out of retirement for one more match, why wouldn’t you put him in the ring with Mr. GMSI? Cage is one of only a handful of people that could stand across from Goldberg and actually look like a credible threat, and he’s currently on a streak in Impact Wrestling. Obviously, contracts and exclusivity become an issue because of that, as I’m not sure how ready AEW would be to give a match with the biggest name on their show to somebody contracted to a different company. On top of that, would Impact Wrestling brass want their top star working such a high profile match on a show that doesn’t make them any money? Both are valid questions, but it’s undeniable that Cage vs Goldberg would be an intriguing matchup for both guys.

Timothy Thatcher is the second person that came to my mind here for a few reasons. First off, and this ties into the reason I listed Brian Cage above, Timothy Thatcher is listed at 6’3 and 224 pounds. And while 6’3 224 probably won’t look that big against a 6’4 290 pound Goldberg, it also won’t look as small as someone like The Young Bucks themselves would. I mentioned “a handful” of people that Goldberg wouldn’t dwarf when looking across a ring at them, and Thatcher is one of the people in that handful. The second reason I put Thatcher on this list is his style. He works a very hard hitting, physical style that allows him to “play bigger” than he otherwise would, and I think it’s a style that could work when trying to sell him as a credible threat to someone Goldberg’s size. While Brian Cage could conceivably outmuscle Goldberg in the ring, Tim Thatcher could play more of a “cutting him down to size” role, which would make for a compelling story in its own right. Finally, and this is a big plus on the AEW side of things, I don’t believe Thatcher is currently contracted anywhere. When you’re starting a new promotion that is already fielding tv offers, you’re going to need talent that isn’t tied down elsewhere, and Thatcher fits that bill.

Before you start yelling at me, I know. This wouldn’t be the most fun pick from a match quality standpoint. Need I remind you, however, that we’re fantasy booking GOLDBERG here? We threw match quality out the window the second I started writing this column. Goldberg is good enough at what he does, but the list of what he does is a short one. On the other hand, the main criticism lobbed at Cody is that all of his big matches get overbooked. In a way I think that some light overbooking could actually help Goldberg in this case. You want to have a match that deviates just enough from the “Spear, Jackhammer, count the lights” formula without showcasing how limited Goldberg is in the ring, and I think Cody would be the perfect person to give him that match. And there’s the added layer of Cody being the Executive VP of AEW, so if there’s a job that needs to be done to help the company grow, Cody would probably be the one to do it.

The obvious concern here is that the fans at any AEW show are going to be 100% behind Cody, The Young Bucks, Hangman Page, and (if he appears) Kenny Omega. So booking Cody vs Goldberg could make an audience turn on AEW’s (more than likely) highest paid acquisition.

Probably the least name on this list to American fans, Daisuke Sekimoto is a veteran on the Japanese wrestling circuit, having held gold in All Japan, Big Japan, DDT, and Zero-1 over the course of his career. And, after doing some research on Goldberg’s Wikipedia page, it came to my attention that he actually wrestled in All Japan in between his WCW career and his first WWE run. In a way, I think it would be kind of poetic for Goldberg to make his non-WWE/WCW return against a Japanese talent, and Sekimoto is one Japanese wrestler who I believe could work to Goldberg’s strengths. Seriously, if you look up Sekimoto’s matches against WALTER, Keith Lee, and even Zeus, you’ll see that Sekimoto does his best work against big guys who he can really lay into.

The main concern with booking Sekimoto is simple: If AEW wants to have a working relationship with New Japan, bringing in a non-NJPW Japanese wrestler would certainly get in the way of that. At the time that I’m writing this, however, the status of that working relationship is still very much up in the air, so rather than listing someone like Minoru Suzuki or Hirooki Goto, I went with Sekimoto.

There’s no denying that Chris Jericho is the biggest name on this list, he is after all the only former WWF/E World Champion on here (And, as he loves to remind us, the only man who beat Stone Cold and The Rock in the same night.) If AEW is looking to make a big splash, and if AEW is booking Bill Goldberg that’s certainly what they’re looking to do, no match would be better suited to do that than Chris Jericho vs Goldberg.

An added wrinkle with this match, one that I’m sure AEW, Jericho himself, and Goldberg would be willing to play into, is the reported real life heat that Jericho and Goldberg had back in WCW. If Chris Jericho is to be believed, he and Goldberg squashed that beef a while ago, but reigniting the rivalry in AEW would surely be good for business.

As much as it would benefit AEW to have Jericho’s name on their match card, let’s not pretend it wouldn’t help Jericho too. Aside from getting what I’m sure would be a hefty paycheck, Jericho would also keep his name out there in the non-WWE wrestling world, which he would be wise to do considering the recent announcement of “Chris Jericho’s Rock ‘n’ Wrestling Rager At Sea Part 2”. We saw Jericho pop up at All In, and seeing him appear at Double or Nothing hardly seems out of the question.

So there it is, the 5 names I’d like to see Bill Goldberg face if he does pop up in All Elite Wrestling. With AEW having an announcement this Tuesday in Jacksonville we’re likely to learn if this was, in fact, just Twitter nonsense, or if All Elite Wrestling is truly about to be next.