Why Cody Rhodes? Here’s Why 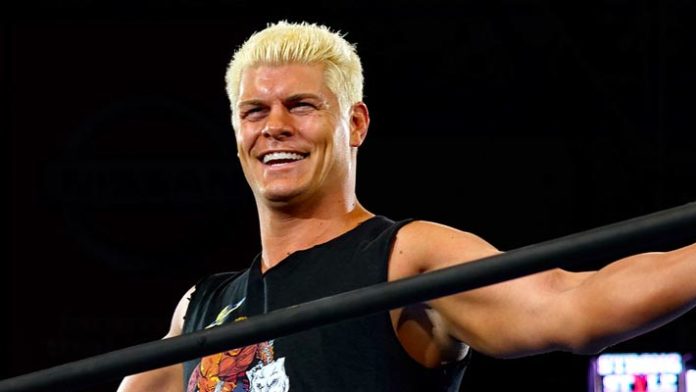 I’m sitting here on this early Sunday morning and it should come as no surprise to anyone that I’ve got AEW on the brain. I’m feeling especially grateful, excited and emotional about everything that’s happened this past year and all that’s to come.

This time last year, I was counting down to All In. I remember the moment Cody made the tweet saying he’d take the bet and fill a 10,000 seat arena. I remember exactly what I replied with.

“You’ve been proving people wrong your entire career. If anyone can make this happen, it’s you. I’d be one of the 10,000 without question.”

The second half of 2018 was the start of a wild ride that hasn’t slowed down. All In was a dreamlike weekend for me. So many things happened that I would have never been able to imagine being real and yet they were very real and happening in my life!

I’ve been a supporter of Cody for nearly 12 years now. I don’t say that to brag, but it’s just a fact. I’ve made many tweets with limited characters as to what it means to me to see his success today and I still don’t feel like I’ve accurately expressed it. I’m not sure that it’s even possible for me to express it honestly. It just means so much.

People ask me all of the time. “Why Cody?” People want to know what’s made him so special for so long. People want to know why I’ve invested over a decade of my life supporting him. The answer to this isn’t as simple as him being incredible in the ring or a really good person. He’s both of those things, but he’s so much more than that. He does so much more than that.

I think the best way to describe it is by using music as a comparison. Music makes you feel. There are certain musicians or bands whose music moves you. There’s always that one band that you could listen to for the rest of your life and never get bored. That band where every song is perfection to you. You get lost in the lyrics, lost in the music itself. If someone were to ask you why that band is your favorite, you’d tell them this.

Well, for me, this is how watching Cody wrestle makes me feel. I could watch Cody wrestle for the rest of my life and never get bored. Every match is a hit for me. Using my analogy here, Cody doesn’t write a bad song. He always makes me feel his emotion every time he steps into the ring. From the expressions on his face to the intensity he puts into every move, every match is a rollercoaster of emotion from beginning to end. The very moment Cody makes his entrance, he’s on. It doesn’t turn off for a single second. That’s what has always set him apart for me.

Over the years, I’ve watched as Cody has evolved as a wrestler. I’ve watched him add new things, make changes to his appearance and how he presents himself in general. I’ve seen him paired with various tag team partners. I’ve watched as he surpassed every single one of those partners. I don’t think anyone works harder or loves pro wrestling more than Cody does.

He makes it easy to remain loyal for this long, too. He genuinely never stops working to improve and better himself. On top of being sensational in the ring, he’s also an extraordinary human being. It never fails to make me smile when I read stories from fans about their interactions with Cody. I’ve never read a negative one. Cody is the guy who takes the extra time to talk to every person. He makes a point to make everyone feel important and special. Cody’s the guy who will spend an extra hour of his time if he has to in order to make sure every person who wanted an autograph got one and wasn’t rushed in the process. That’s a special person. That’s someone you feel good about supporting. It’s all of these things and still so much more that have left me never wanting to support anyone else the way I support Cody.

You’re probably thinking, “So much more?! What else could she possibly have?!”

This brings me to a more current time in Cody’s career. Specifically the past three years. I can’t even imagine the amount of courage it takes to step away from a guaranteed contract. I can’t even imagine how stressful and terrifying that decision was. The very moment Cody posted that he asked for and was granted his release, all I could feel was so proud and excited for whatever would be next.

I couldn’t have dreamed any of what has happened up if I tried. To see Cody bet on himself and become one of the biggest stars in the world is the most amazing feeling. To see the world embrace him the way they have, to see his shirts at Hot Topic, to see his Funko Pops at Target, to see him win so many championships including the Ring Of Honor World Title and the NWA Worlds Heavyweight Championship… there are simply no words! The word proud doesn’t even begin to cover the way I feel seeing all of this.

Of course, making those changes isn’t easy. The easy route is to stay in the safe situation. If you want to make a change in your life, you have to do the work.

The last year has been a whirlwind for me. I’ve experienced some amazing things and Cody is such a big part of why it all happened. All In weekend wasn’t just a fun wrestling weekend for me. All In was life changing. All In was proof that pro wrestling was alive and well more than ever. The feeling of being around thousands of wrestling fans all celebrating what pro wrestling could be was simply out of this world!

All In was the start to so much. Sitting here today as I count down to All Out, I can’t help but feel emotional knowing that a year ago, even if we didn’t quite know it yet, AEW was on its way to being a reality.

2019 has been absolutely incredible as I’ve been so fortunate to experience AEW come to life firsthand. From the fan rally in Jacksonville to the ticket announcement party in Vegas to Double Or Nothing itself, it’s meant the absolute world to me to be at these events supporting a group of people I truly love and believe in and of course at the top of that list is Cody.

The future is so bright, we have so much to look forward to and I’m so beyond words excited to see it all unfold and continue to be there for every moment I can be. Whether I’m there in person or at home, it remains the same. I’ll be supporting Cody and AEW with all of my heart and soul. Shedding tears, getting goosebumps and doing anything and everything I can to show my love.