Wrestlemania 31: The Night WWE Proved Us All Wrong

Going into Wrestlemania 31, the majority of fans including myself moaned and complained about the build up to Showcase of Immortals as well as expressing displeasure for the way our favorite superstars were booked. Nobody was expecting Wrestlemania 31 to be as good as Wrestlemania 30. We all Facebooked and Tweeted that this would be one of the worst Wrestlemanias of all time. WWE proved all of us wrong by delivering one of the best Wrestlemanias of all time. From start to finish this was a well-produced show. Every match on the card was good or great. This show was so good I couldn’t do a pros and cons column because there weren’t many cons on this show. Here are my thoughts on each of the matches. 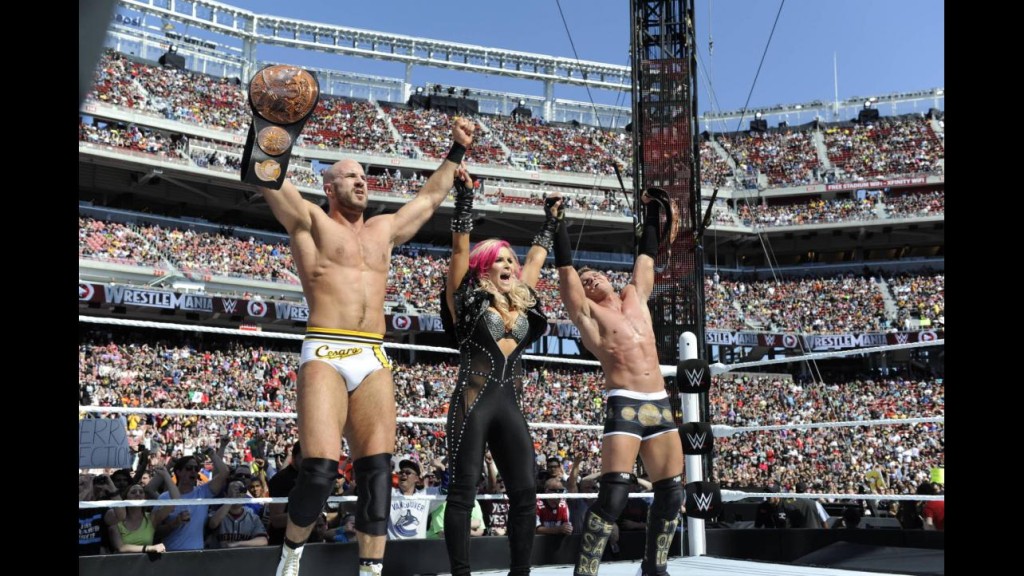 This was the right match to open the show. All of the teams worked hard. It was great to see Cesaro and Kidd get the win. Hopefully moving forward there will be more storylines involved around the Tag Team Titles and we can get emotionally invested in these tag matches. 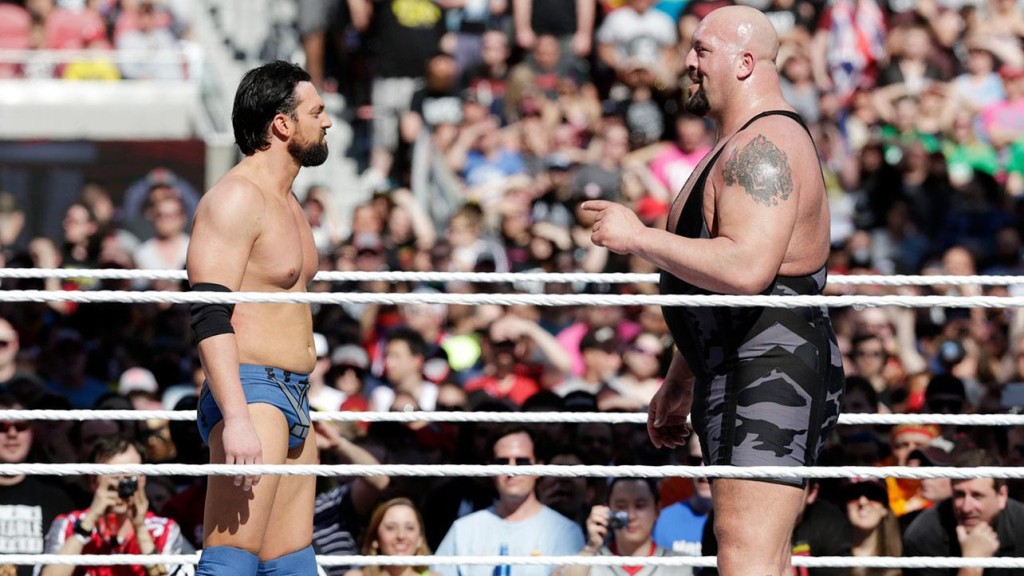 Let me start off by saying this Battle Royal was booked better the Royal Rumble. It was great getting to see Hideo Itami in there. I just wish he would have been highlighted more or even possibly win. It would have been a great way to introduce him on the main roster and also plug NXT. We finally saw the split between the Miz and Damien Mizdow. It was disappointing to see Big Show eliminate Mizdow for the win. Mizdow could used this victory to elevate him from a comedic act to a serious contender. 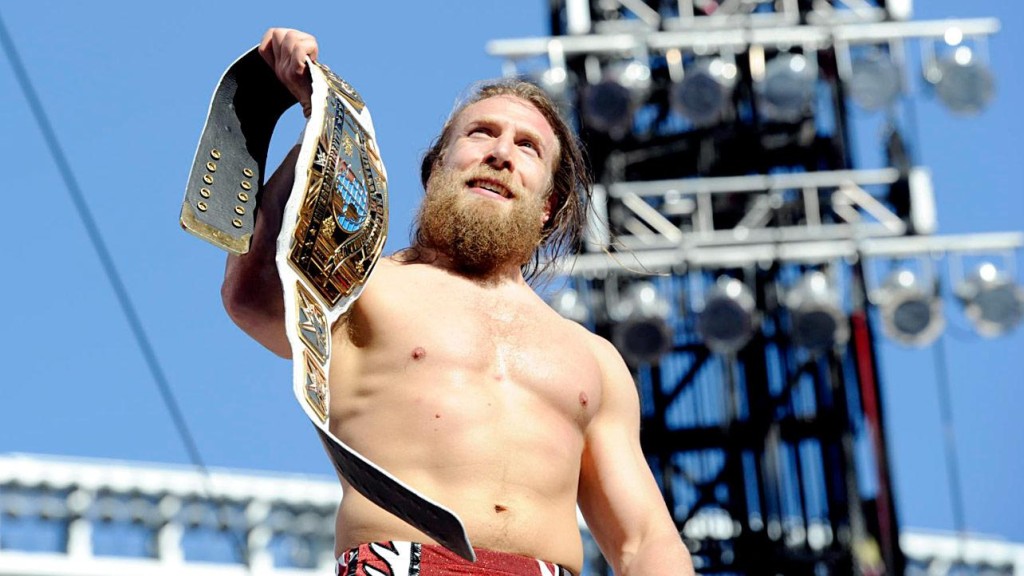 Opening the main show with the ladder match was a great call and the set the pace for the rest of the show. There were a lot of great spots in this match. Every guy got their chance to shine. Luke Harper looked like he killed Dean Ambrose with that powerbomb through the ladder. The final headbutt sequence between Daniel Bryan and Dolph Ziggler was intense and full of suspense. When it was all said and done, the right man won. Daniel Bryan winning immediately jumped the stock of the Intercontinental Championship. We started Wrestlemania the same way we ended it, with over 76,000 people chanting yes. 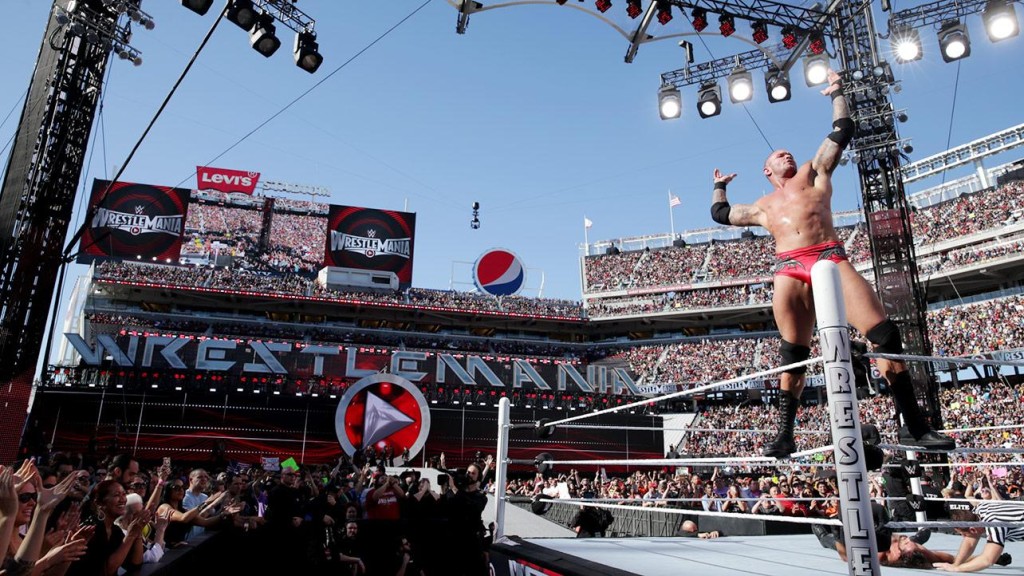 This has to be Randy Orton’s best Wrestlemania match. Orton was looking like the Legend Killer with his red trunks and elbow pads. Rollins’ and Ortons’ styles meshed greatly. J & J’s involvement leads to them getting DDTed on the outside, leaving Rollins all to Orton. I was a little disappointed Rollins didn’t connect with the Phoenix Splash. The finish of the match was absolutely insane and has to be one of the best RKOs to date. 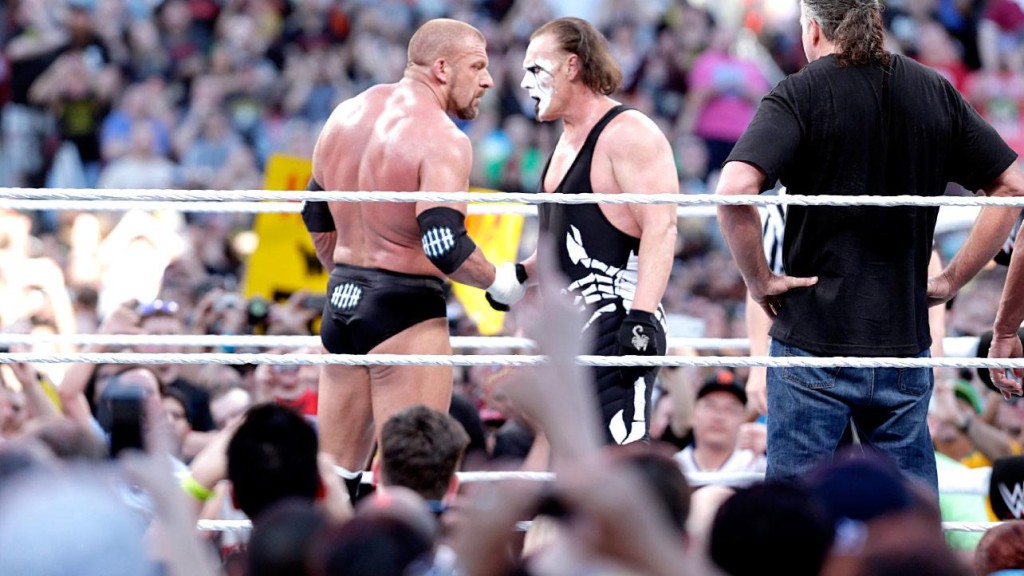 I totally didn’t understand why they had Asian drummers for Sting’s entrance. I found it funny that they were all wearing Sting’s facepaint except the old guy. Triple H’s terminator entrance was very well executed. I was definitely not expecting to hear “Break It Down” in the middle of this match and see DX making a run in to help Triple H. An even bigger surprise was seeing the NWO come down to help Sting. Kayfabe wise it made absolutely no sense for the NWO to help Sting. Overlooking that it was every 90s fans dream to see DX face off with NWO. At first, I was surprised that Triple H picked up the win here. Then I thought about it and it makes sense. Vince will never let a WCW guy go over a WWE guy at the biggest WWE show of the year. It was like Vince had to strike one more nail in the coffin to WCW. I don’t think this loss buries Sting at all. He didn’t lose clean, it took all of DX, Sweet Chin Music from Shawn Michaels, and a Sledge Hammer to the face to beat him. Sting’s loss leaves the door open for one more match to “prove himself” to the WWE Universe. A lot of fans are clamoring for Sting versus Undertaker for Wrestlemania 32. Not sure how good that match would be, but it’s what every wrestling fan has wanted for the last twenty years and people will probably buy a Wrestlemania ticket just to see that match.

AJ Lee and Paige vs. The Bella Twins 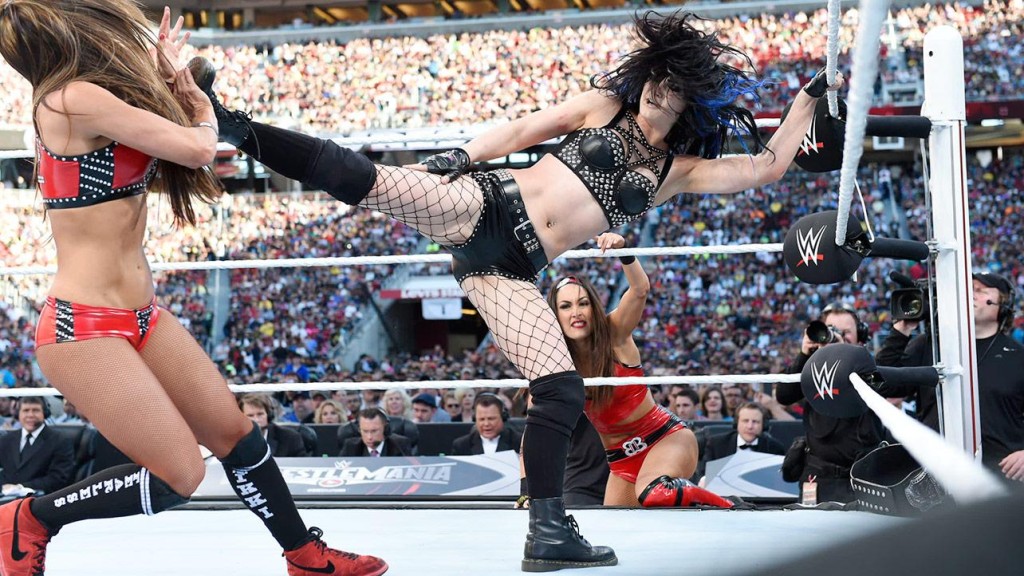 The stars of this match were Nikki Bella and Paige. I personally would have rather seen those two go one on one again and have Brie and AJ in their corners. The majority of this match was a handicap match since AJ decided to take a nap on the outside. This match could have used a few more minutes, but they did the best with the time they had. Nikki tapping out to AJ sets up a potential title shot for AJ at Extreme Rules. 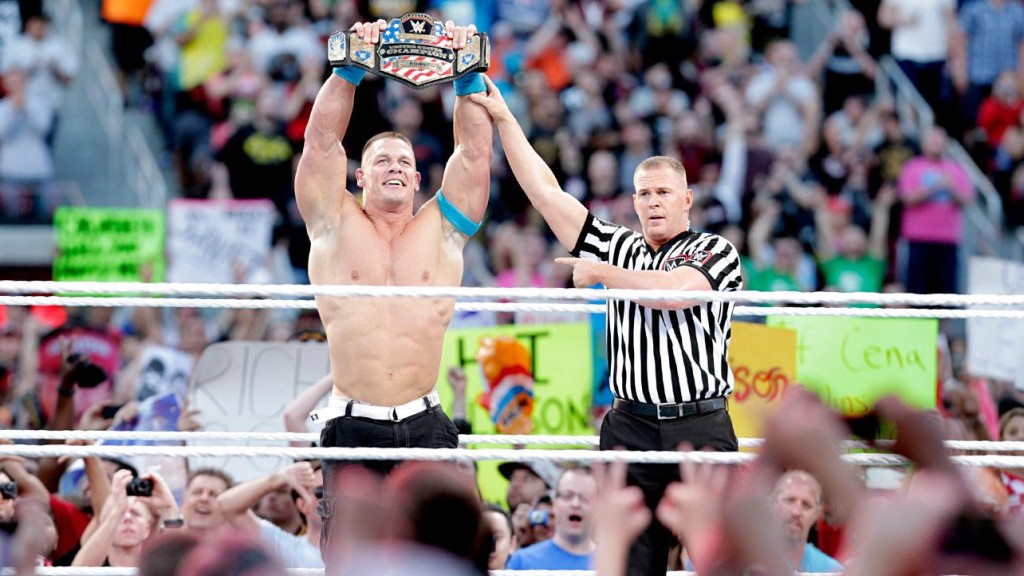 Rusev probably had the best entrance of the night. Rolling into the stadium in a tank and “Russian” soldiers marching down the ring with the Russian flag and Lana leading the way. Despite Cena having the most patriotic opening video, he was still getting a ton of boos. I enjoyed this match much better than their Fastlane match. In big matches, Cena loves to add new moves to his arsenal. Nobody was expecting Cena to hit a Springboard Stunner. Cena winning was no surprise. Just like with Byran’s win, the United States Championship’s value has risen dramatically with the former 15 time WWE Champion holding it. Cena will bring more attention to the title and make it a prize that everybody will want to fight for. This loss doesn’t hurt Rusev. He can blame his loss on Lana getting in the way and has his rematch clause he can take into effect at Extreme Rules.

The Rock and Ronda 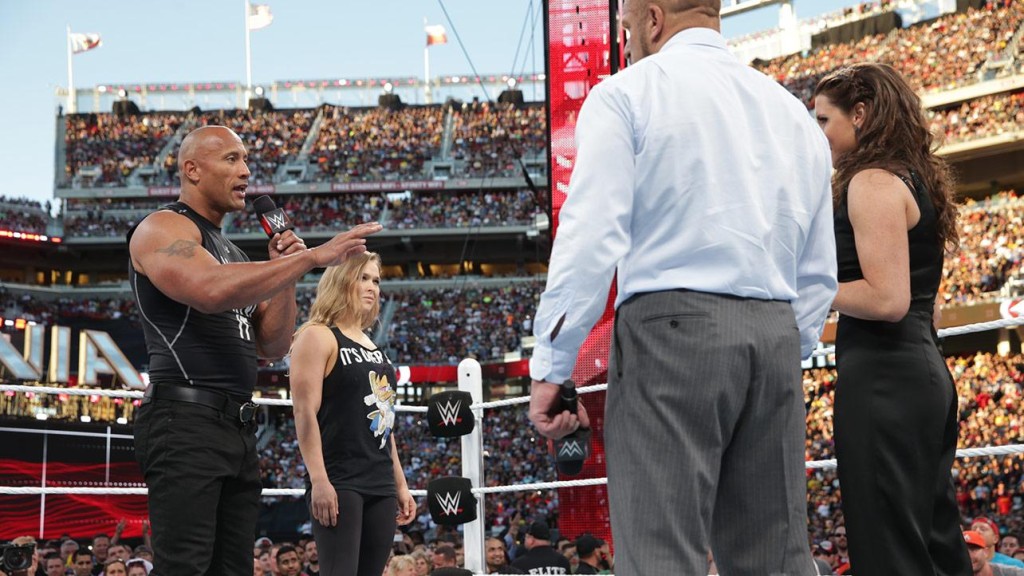 After seeing The Rock’s mom in the front row after Cena’s match, I was expecting a Rock appearance. I was just hoping he wasn’t going to get involved in the main event. I was relieved to see him come out and interrupt Stephanie and Triple H. After a big slap from Stephanie, The Rock gets his Furious 7 co-star and UFC fighter, Ronda Rousey to even the playing feel. Ronda looked great in a WWE ring and it’ll be interesting to see if WWE can get her in a bigger role for next year’s Wrestlemania. Ronda and Stephanie were the standouts in this segment. Stephanie is giving her dad the run for his money as the best heel authority figure in WWE. 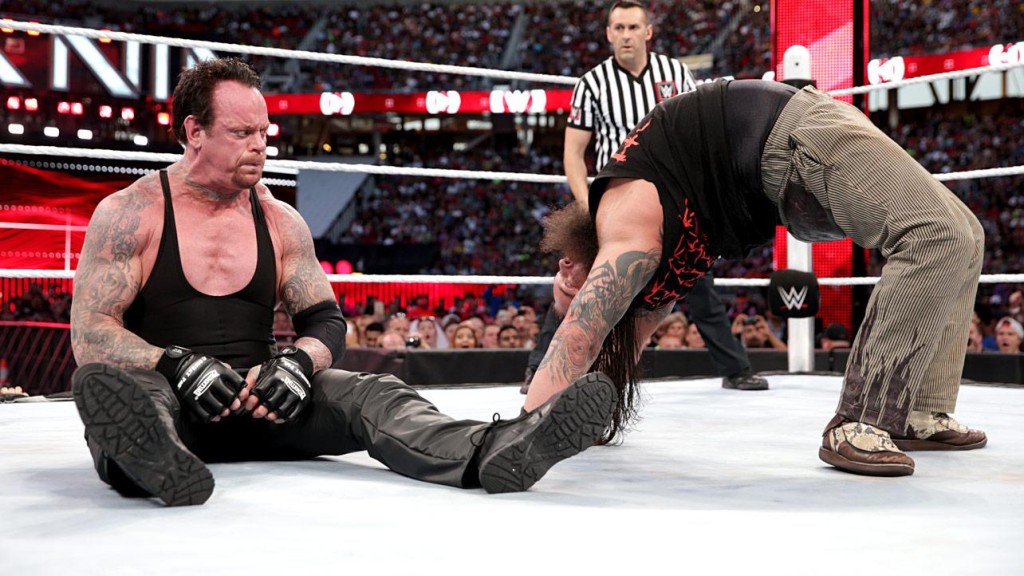 All night I was joking that Undertaker was going to return as the American Badass. Even though he arrived as the Deadman his appearacne and physical shape resembled the American Badass. Taker looked ten times better than he did last year. He didn’t look like a frail old man who was trying to hang on to his career. He looked like a guy who could go for five more Manias if he wanted to. This match was better than expected. There was alot dissatfication among fans with Bray losing. Just like with Sting, this lost does not hurt Bray. The fact that Bray had a Mania match with Taker has elevated him to another level. Also next year Mania is in Undertaker’s home state of Texas. WWE has 100,000 plus seats to fill. A losing Undertaker is not going to put butts in the seat. Taker can use the momentum from this win to be placed in a marquee must see match for Wrestlemania 32. 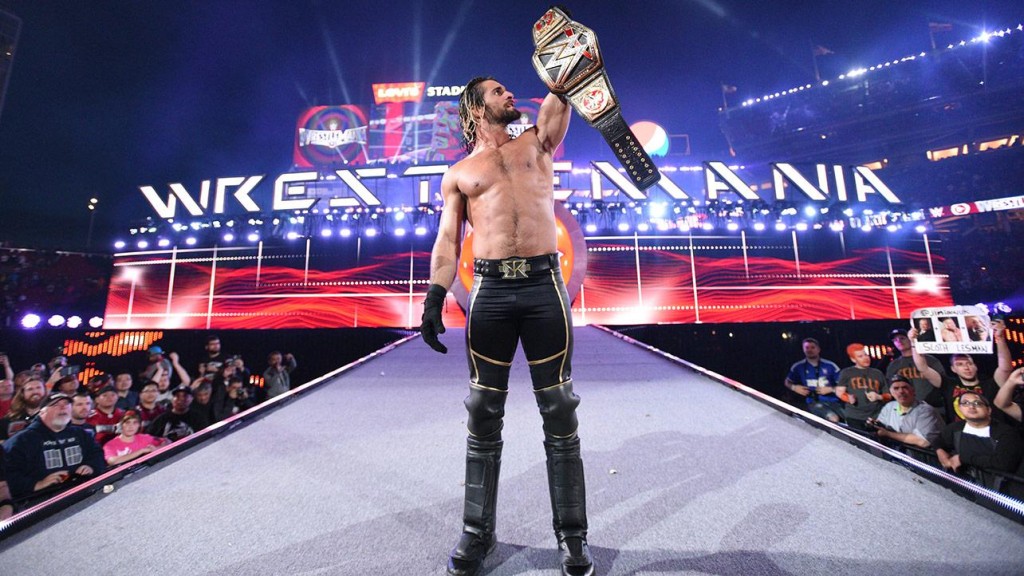 This was the best match of the night. Even though they didn’t do an official double turn, the crowd turned both of these guys. Brock unleashed a hellacious beating on Roman Reigns. Several suplexes and F-5s. Brock unknowingly created the trend of the night when he let Reigns know he was in Suplex City. Reigns had a great showing in this match and resembled and ECW Tommy Dreamer. A pretty boy the fans hate because they don’t think he’s tough and goes through punishment to prove he’s tough. As great as Reigns looked in this match he’s not ready to be a babyface champion right now. Having Rollins cash in was the best thing they could have done. People were expecting a cash in, but nobody was expecting in cash in the middle of the match. It had never been done before and gives Rollins some serious heat. After Rollins won, everybody at the Mania party I was at jumped for joy and celebrated. We then proceeded to watch the cash in over and over again. With Rollins as the champion that opens the door for so many potential matches. Right now Lesnar, Reigns, and Orton all have their claims for a title match.