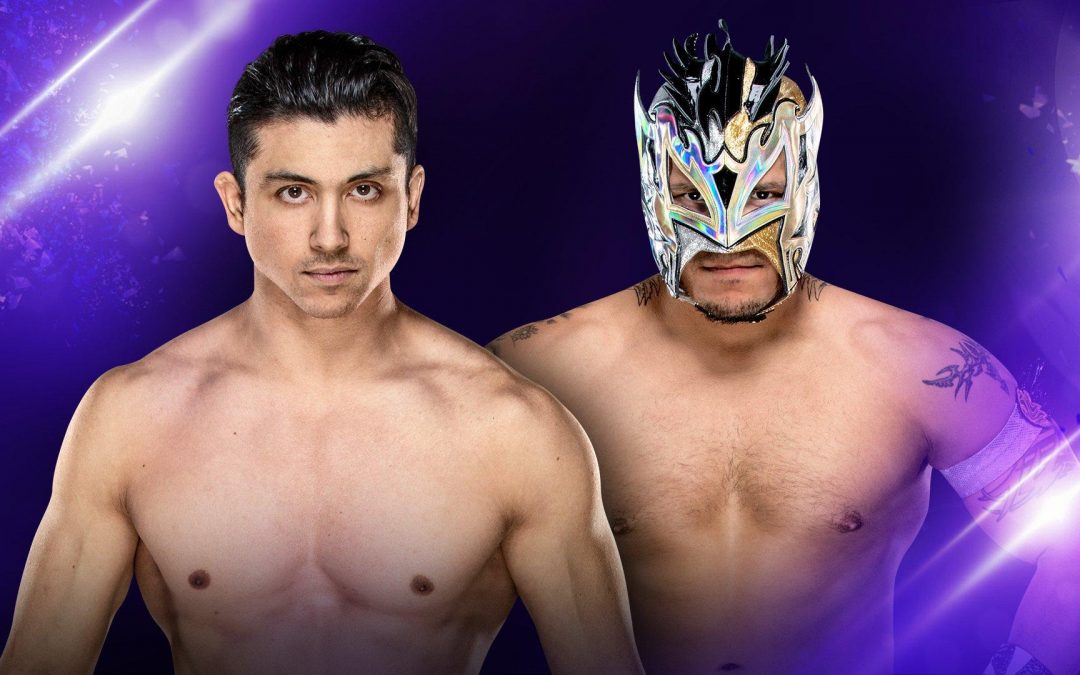 This week’s 205 Live begins with General Manager Drake Maverick hyping the big match between Cedric Alexander and buddy Murphy for the Cruiserweight Championship at WWE’s Super Show-Down on Saturday in Melbourne, Australia. This episode will show how both men are preparing for this upcoming event.

Maverick then hypes tonight’s matches. First up is Akira Tozawa vs Jack Gallagher, whose paths have crossed more often than not in recent weeks. And the main event will see TJP looking to add another trophy to his collection, in the form of Kalisto’s luchador mask.

Percy Watson and Nigel McGuinness join Vic Joseph on commentary for this evening.

Once Tozawa has entered the ring, Gallagher is joined down the ramp by Brian Kendrick and Drew Gulak, all three sporting a tremendous campaign-style “Better 205 Live” t-shirt that I simply have to buy at some point in the very near future.

Tozawa has had his differences with both Gulak and Kendrick in the past, ultimately besting them both when all was said and done. Can he do the same with Gallagher tonight? Somehow, with the numbers game firmly on Gallagher’s side, I doubt that.

Interestingly, Tozawa tests Gallagher at his own grappling game in the opening stages. But Gallagher fights fire with fire, showcasing his own superiority in this style with a number of reversals. With plan A not working, Tozawa reverts back to his normal modus-operandi with a swift punt to Gallagher’s chest. He brings the match back to his own preferred style from hereon-in.

Tozawa looks for a suicide missile headbutt to Gallagher on the outside, but Kendrick jumping the apron acts as a distraction, in turn allowing Gulak to sneakily stop Tozawa in his tracks at the adjacent side of the ring. As predicted, the number advantage plays a significant part in this match.

Gallagher is now firmly in control, twisting and torquing Tozawa to the breaking point. But in an echo of earlier, Tozawa recovers thanks to his smash-mouth offense. He goes for a quick win with his top rope senton finisher. Gallagher spots the threat and rolls out to the floor. For Gallagher’s troubles, however, he receives that previously teased missile headbutt from through the ropes.

Back in the ring and Tozawa applies an impressive octopus submission, but Gallagher reverses this into a stretch of his own, which Tozawa manages to break with some help from the ropes.

Gallagher looks to a superplex to vanquish his opponent, but Tozawa fights loose, Gallagher landing in a prone position under Tozawa who, in perfect positioning for the referee, is allowed to hit the senton bomb finisher, without any interference from Gulak or Kendrick, for the win. Literally defying the odds, Tozawa now has victories over all three of these men over the history of 205 Live.

Tozawa has little time to celebrate as Gulak and Kendrick rush the ring. Gulak takes a microphone and acknowledges that his team isn’t living up to their full potential. Gulak believes that it’s time for an old learning tool to return. Yes, that’s right, it’s the PowerPoint Presentation!

We begin with slide number ten (for those of you new to 205 Live, this is a long story, but just go with it), Gulak has a “no mercy” slide, proclaiming that mercy is a weakness. From now on, this team will have no weakness; no weak links. It should be said that the illustration on the slide is reminiscent of a merciful Brian Kendrick. Gulak waste little time in addressing Kendrick, stating that the team will have no place for former Cruiserweight Champions who have lost their edge. 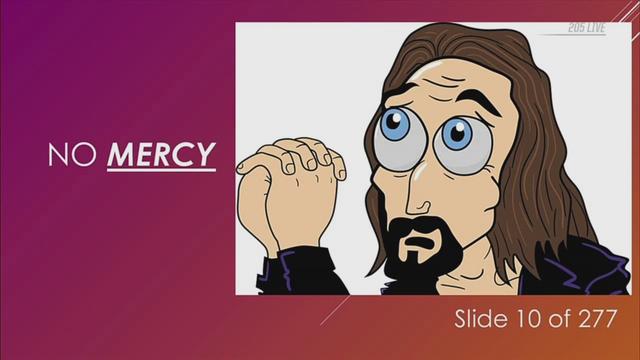 Kendrick realizes that the vultures are circling, and pulls the first punch on Gulak. Unfortunately for Kendrick, Gallagher and Gulak outnumber their now former stablemate, ending with Gallagher peppering punches onto Kendrick whilst in the Gulock. This was quite the surprise. For the first time in his entire 205 Live career, I have genuine sympathy for Kendrick!

We cut to a video of Cedric Alexander and Buddy Murphy training (separately, I might add) in preparation for their upcoming match in Australia, representing 205 Live.

Maverick is asked by Kayla Braxton backstage on the status of Hideo Itami and Mustafa Ali after their grueling encounter last week. Maverick has given both men the night off tonight and promises that the next time they square off, it will be a match that nobody can miss.

McGuinness announces that next week’s 205 Live will have an Open Challenge as made by the Man of The Hour, Lio Rush.

The Lucha House Party come down in support of Kalisto wearing their merchandise. Once TJP makes his way to the ring, his disrespect towards the luchadors continues as he too wears the Lucha House Party t-shirt. Looks like we have the cocky TJP tonight!

Once the WWE Shop advert ends, Metalik and Dorado make their way to the back for the match to begin.

TJP threatens Kalisto with motions of ripping off his mask. One thing we’ve learned on 205 Live is not to mess with Kalisto when he’s fired up. The former Cruiserweight Champion works best when his back is against the wall.

The pair square off with a series of technical exchanges and lucha based offense, Kalisto with a hurricanrana style takedown to gain the upper hand. He mocks TJP with some “floss” dancing (is that the right term??) but manages to stay afloat of TJP’s anger by reversing anything thrown at him with more innovative dodges and offense.

TJP can’t handle Kalisto’s attitude tonight, becoming angrier by the second. Kalisto shows off one too many times, however, a handstand escape resulting in a basement dropkick to the face by TJP. The inaugural Champion continues the assault with a pendulum dropkick on the apron, keeping momentum and pace on his side now.

TJP is in his element. While grounding Kalisto in an Indian deathlock, he rips off the tail of Kalisto’s mask, throwing it out of the ring. Like a superhero, TJP has broken a part of Kalisto’s powers it seems, the luchador struggling to get back into the match. He tries for a springboard attack, but TJP follows and floors him with a modified Russian leg sweep off the middle rope.

TJP focuses on Kalisto’s neck now but still takes time to mock the Lucha House Party with some poses. TJP keeps a suplex locked, transitioning into a back suplex, earning a near-fall. He gains another two count with a corkscrew Swanton of sorts from the second ropes.

Kalisto tries for another fightback, but TJP shuts him down almost immediately. TJP climbs the ropes but wastes time with more showboating. His second Swanton bomb attempt is avoided by Kalisto, who is now able to deliver, in succession, all the offense he was unable to until now.

Kalisto now looks to the crowd for support. He goes for the Solido Del Sol, but TJP’s panic affords him a frantic escape. Both men are tiring now. TJP takes to the top rope again, but an enziguri from Kalisto rocks him, stopping him in his tracks. Kalisto climbs the ropes and destroys TJP with a victory bomb (you’ll have to google it, I couldn’t possibly describe it), but this only earns Kalisto a surprising two count.

Kalisto starts the “lucha” chant and attempts another Solido Del Sol. TJP escapes again, dropkicking Kalisto’s knee, then applying the Inverted Kneebar finisher. Kalisto manages to roll TJP into a pin, but TJP kicks out, the submission still intact. Kalisto manages to grab the ropes, but the damage is done.

TJP takes matters into his own hands. He starts ripping Kalisto’s mask off. Gran Metalik comes down to help his teammate, but TJP fights him off. This distraction allows Kalisto to roll up TJP for a surprise win.

Furious at what just occurred, TJP rains brutal punches down on Kalisto. The attack ends with TJP ripping yet another mask off a Lucha House Party member. Lince Dorado comes in and tries to right the wrong, but TJP escapes the ring and vaults the barrier, holding his latest prize aloft. This shocking scene closes 205 Live. 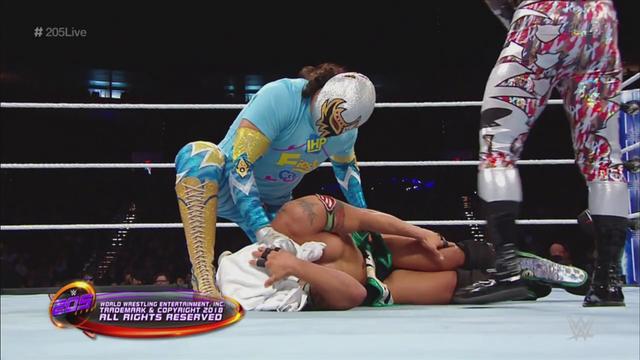 TJP is waging a one-man war on the Lucha House Party. Although he didn’t win the match tonight, he is most certainly the dominant force as he continuously disrespects a tradition held so dear by his enemies.

For more shocking turns of events, let’s all cross our fingers for a Buddy Murphy victory this Saturday!

In the meantime, if you want to hear more WWE opinion from “Clive” out with the 205 Live bubble, check out my podcast, “The Ricky & Clive Wrestling Show”, on the Social Suplex Podcast Network. Clive runs it solo this week with Ricky being a late drop-out. Nevertheless, Clive soldiers on with your go-to preview of this Saturday’s WWE Super Show-Down in Australia. He looks at the card in its entirety (so far), how the build has been for this show, and what, if any, surprises we may get. A shorter episode than normal this week, but Clive covers all you need to know for the super duper house show. He even manages to solo quiz!