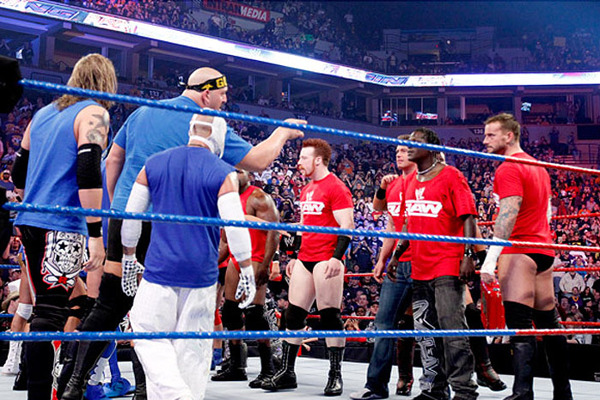 Does A WWE Brand Split Need To Happen?

What’s happening wrestling fans of Social Suplex? I know I’ve been away for awhile… (Hopefully you’ve missed me) One of the questions I’ve constantly thought about was if a brand split would work during this era of wrestling? With Shane McMahon’s WrestleMania 32 match against the Undertaker for control of Monday Night Raw, rumors have circulated around of a possible brand split.

The brand split began in 2002 and officially ended in 2011 after the merging both brands. Raw and SmackDown working exclusively from one another, each with their own unique rosters, titles, and PPVs with the exception of the big four (Royal Rumble, Summer Slam, WrestleMania and Survivor Series.)

At the time it made sense as WCW had just gone out of business and ECW had gone bankrupt so there were so many free agent wrestlers. The split gave established names a place to work and up and coming wrestlers there chance to shine. For example John Cena made his name on Smackdown in 2002 before being drafted to Raw in 2005.

However with a slimmer roster and a lack of established talent the probability of a successful brand split is slim. Honestly think about it RAW is 3 hours long and when its done great it is amazing but the majority of the time its dragging on for far too long. If you add in the brand split it means that there is less talent and fans would more likely have to sit through BORING and mind numbing promos that would make any person fall asleep.

Don’t get it twisted the in ring work has improved but if you take away superstars like Dean Ambrose, Bray Wyatt, Kevin Owens and many more and place them on Smackdown, the fans would have to subject to more Big Show matches and the same R-truth and Goldust segments.

The factor of NXT always comes up there roster is full of great talent. Samoa Joe, Hideo Itami, Finn Balor, Bayley, American Alpha, Enzo and Cass. They’re all ready to be called down to the main roster right away. But that isn’t enough. At the beginning of the invasion WWE had talent from three different companies and NXT does not have the amount of quality. Also people seem to forget if the stars from NXT move up to the main roster, the best product of WWE loses its main attractions and it will either disappoint or forever be in its own shadow.

If the Brand split returns it may bring some excitement back to WWE but would it improve the quality of story lines and make everything better?

That’s for you to decide. Leave your comments down bellow and tell me if you think the brand split is a good/bad idea.