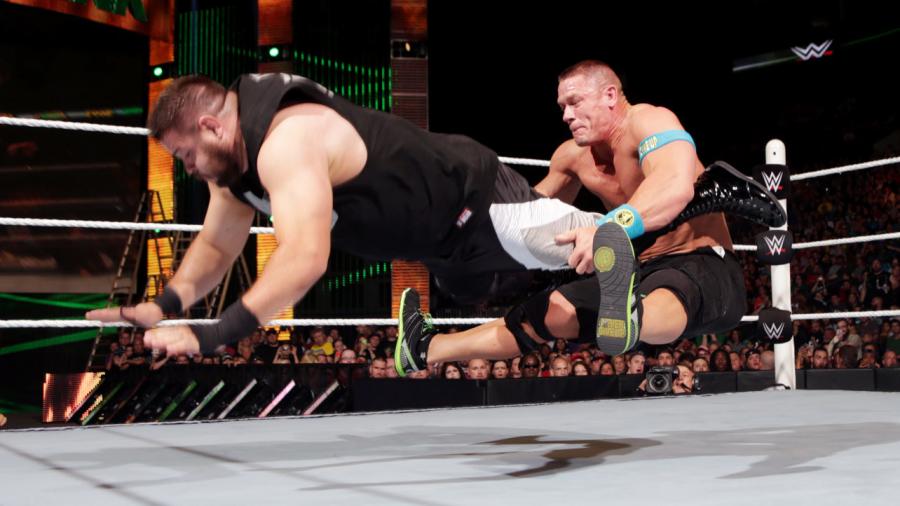 Welcome to Night 10 of the WWE Fantasy G1 Climax Tournament. If you’re new to the tournament you can catch up on previous night results here. Night 10 features the 5th round of the SmackDown block. Here are the SmackDown Block Rankings going into Round 5:

Match Highlights: The bell rings and both men lock up. Rusev out muscles Ziggler and pushes him down. Ziggler initiates a test of strength. Rusev laughs and reaches his hand out. Ziggler kicks Rusev in the stomach before they can lock hands. Ziggler throws several quick punches. Ziggler attempts to throw Rusev into the ropes. Rusev blocks and throws Ziggler into the ropes. Ziggler comes off of the ropes with a crossbody for a near fall. Rusev rolls out of the ring and consults Lana.

Ziggler attempts a plancha, but Rusev catches him and rams him into a post. Rusev rolls Ziggler back in the ring and applies a bear hug. Ziggler fights out of the bear hug and hits a big drop kick. Rusev retreats to the corner. Ziggler blows a kiss at Lana and charges in for a Stinger Splash. Rusev moves out of the way. Rusev hits a series of shoulder thrusts to Ziggler in the corner. Rusev follows up with Bulplex for a near fall.

Ziggler goes to the top rope and waits for Rusev to get up. Ziggler attempts a diving crossbody, but Rusev catches him and attempts a Fallaway Slam. Ziggler lands on his feet and locks in the Sleeper. Lana gets up on the apron and is yelling at Ziggler. Ziggler lets go of the hold and starts arguing with Lana. Ziggler turns around and meets a big Machka Kick from Rusev. Rusev locks in the Accolade and Ziggler submits.

Baron Corbin picked up his 1st victory of the tournament on Night 8 against Dolph Ziggler. Corbin now has the tough task of defeating Shinsuke Nakamura. Nakamura won a hard hitting bout with Luke Harper in the last round. The King of Strong Style will be looking to continue his winning ways tonight.

Match Highlights: Corbin pushes Nakamura and says “you’re not that tough”. Nakamura retaliates with several stiff forearm shots. Nakamura bounces off of the ropes and attempts a running forearm smash. Corbin hits a big boot as Nakamura runs in. Corbin chokes Nakamura with his foot. The referee breaks it up and threatens a disqualification. Corbin suplexes Nakamura for a near fall.

As mentioned earlier Luke Harper lost in the last round to Nakamura. Harper has been impressing fans and pundits with his tournament performance thus far. On Night 8, Randy Orton stooped to new lows by kicking Sami Zayn below the belt to secure a victory. Orton has shown that he’s done playing nice and will do whatever is necessary to win this tournament.

Match Highlights: Both men lock up. Orton backs Harper into the ropes. The referee asks for a clean break. Orton slaps Harper and backs up. Harper drops Orton with a shoulder tackle for a one count. Orton rolls out of the ring. Harper follows Orton outside and hits him with a palm strike. Harper sends Orton sternum first into the barricade. Harper bounces Orton on the announce table. Harper rolls Orton into the ring.

Orton clotheslines Harper as soon as he rolls in the ring. Orton starts choking Harper. The referee breaks it up. Orton picks Harper up and whips him in the corner. Orton charges in for a clothesline. Harper moves out of the way. Harper hits a quick back suplex for a near fall. Harper ascends to the top rope. Orton hits a jumping dropkick that sends Harper crashing to the outside.

Orton goes outside the ring and hits a back suplex to Harper on the barricade. Orton grabs a camera cable and starts choking Harper. The referee jumps out the ring and breaks it up. The referee threatens to disqualify him and tells him to get in the ring. Orton rolls Harper back into the ring. Orton goes for a cover and gets a 2 count. Orton applies a rear chin lock. Harper starts to fight out. Orton knees Harper into the stomach. Orton then bounces Harper rib first on the top rope. Orton gets a near fall.

Orton attempts the RKO but Harper pushes him off. Harper hits the Discuss Lariat for a near fall. Harper goes for the Running Powerbomb. Orton escapes by thumbing Harper in the eye and hits an Angle Slam for a near fall. Orton attempts the draping DDT. Harper blocks it and counters with a Super Kick for a near fall. Harper attempts the Discuss Lariat again. Orton ducks the lariat and hits the RKO. Harper gets his foot on the bottom rope before 3. Orton thinks he won and is celebrating. The referee tells Orton the match is still going. Orton starts yelling at the referee and shoves him. Orton turns around and is hit with a big boot. Harper drills Orton with the Running Powerbomb and gets the win.

AJ Styles defeated John Cena in a 5 star classic on Night 8. Even though AJ won his previously injured back took a beating. AJ has been doing everything he can to rehab his back. The medical team has cleared him to compete. As mentioned earlier, in the last round Sami Zayn was the victim of a low blow which cost him the match. Zayn will need to get his mind off of Orton and focus on AJ.

Match Highlights: Both men shake hands, then lock up. Both men exchange several holds and end up in a stalemate. Both men exchange chops, then AJ grabs a side headlock. Zayn bounces AJ off of the ropes and attempts a back body drop. AJ counters with a sunset flip. Sami kicks out at 2 and rolls out and has AJ in a Jackknife pin. AJ kicks out and reverses it into another pin. Both men exchange quick pin falls. Both men are on their feet and AJ hits the KENTA series for a near fall. AJ starts working on Zayn’s left leg with several strikes. AJ attempts to lock in a Figure Four, but Zayn kicks AJ off. Zayn hits a big leg lariat that sends AJ out of the ring.

Zayn bounces off of the ropes and wipes AJ out with a flip dive. Zayn rolls AJ back in the ring. Zayn hits a standing moonsault for a near fall. Zayn attempts a vertical suplex, but AJ knees Zayn in the head on the way up. AJ hits the Ushigoroshi for a near fall. AJ starts working on the left again. AJ locks in an Indian Death Lock. Zayn gets to the ropes for a break. AJ picks Zayn up and hits a knee breaker and then locks in the Figure Four in the middle of the ring. Zayn eventually flips over and reverses the pressure. AJ gets to the ropes for a break.

AJ attempts the 450 Splash but Zayn moves out of the way. Zayn hits the Blue Thunder Bomb for a near fall. Zayn attempts a Half and Half Suplex. AJ blocks and reverses into a Calf Crusher. After a few minutes in the hold, Zayn is able to make it in the ropes.  AJ picks Zayn up and goes for a Dragon Screw on the left leg. Before AJ can execute, Zayn hits an Enziguri with the right leg. Zayn pulls himself up in a corner. AJ gets up and charges in. Zayn moves out of the way and AJ crashes into the turnbuckles.

Zayn attempts the Helluva Kick but stops midway due to his left leg. AJ attempts a running clothesline. Zayn is able to reverse the clothesline into a Reverse STO. Zayn locks in the Koji Clutch. AJ tries everything he can do to escape. AJ is forced to submit and Zayn gets the win. Both men shake hands after the match.

Kevin Owens has used every dirty trick in the book to remain undefeated. One can only imagine what Owens has up his sleeve tonight for John Cena. Cena lost a hard fought battle to AJ in the last round. In this match, Cena can not rely on his strength alone. He’s going to have to out smart Kevin Owens.

Match Highlights: Owens and Cena go face to face and start talking trash to each other. In the middle of talking, Owens hits Cena with a headbutt. Owens follows up with a clothesline and locks in a rear chin lock. Owens screams in Cena’s ear “I can see you John”. Cena fights to his feet. Owens thumbs Cena in the eye and takes him back down in the chinlock. Owens screams “now you can’t see me John!”. Cena fights back to his feet and fights out of the hold. Cena whips Owens into the ropes and hits Lou Thez Press. After several punches Owens pushes Cena and rolls out of the ring.

Owens hits a Pumphandle Neckbreaker for a near fall. Owens whips Cena into the corner and stomps him until he’s in a seated position. Owens attempts the Cannonball. Cena moves out of the way at the last second. Owens collides with the turnbuckles. Cena hits a Fisherman Suplex for a near fall. Cena goes to the top rope and attempts a diving leg drop. Owens catches him and powerbombs him for a near fall. Owens locks in the STF. Cena fights to the ropes.

Here are the SmackDown Block Rankings after Round 5: