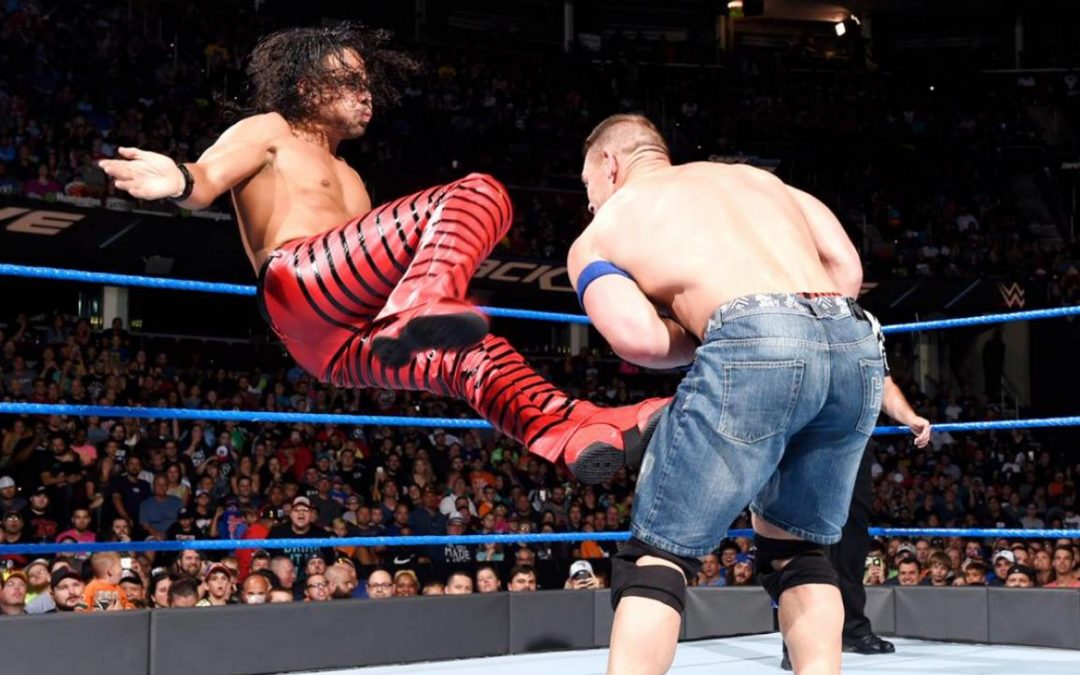 Welcome back to the WWE Fantasy G1 Climax Tournament. If you’re new to the series you catch up on the previous matches in the archives. Night 14 of the tonight will feature round 7 of the SmackDown Block. Here are the rankings going into round 7:

With six losses and zero wins, Dolph Ziggler is mathematically eliminated from winning the SmackDown Block. Since Ziggler can’t win the Block, his role in the tournament is now to be a spoiler for his next three opponents including Kevin Owens. Kevin Owens started the tournament with a four-match win streak. Owens’ win streak ended on Night 10 when he was defeated by John Cena. Owens then lost to AJ Styles on Night 12. Owens needs to end his losing streak tonight if he wants to remain on top of the SmackDown Block.

Match Highlights: Before the match, Owens grabs the mic. Owens tells Ziggler he should just lay down since he has no chance of winning the tournament. Owens goes on and on about how much Ziggler sucks. Ziggler superkicks Owens in mid-speech. The ref rings the bell and Ziggler goes in for a cover and gets a near fall. Ziggler drops several elbows and gets another near fall. Owens rolls out of the ring to catch his breath. Ziggler quickly follows Owens out of the ring and jumps him. Ziggler rolls Owens back in the ring.Ziggler attempts another Superkick, but Owens catches his foot and hits a clothesline.

Owens calls Ziggler a Shawn Michaels wannabe and attempts a running senton. Ziggler quickly rolls out of the way and uses a quick cradle to get a near fall. Ziggler hits the Zig Zag and pins Owens. Owens breaks the pin by putting a finger on the rope. Ziggler argues with the referee over the rope break. Owens takes advantage and School Boys Ziggler for the win.

This is a very important match for both men. Both men are coming into this match with six points. If either man wants a chance of winning the block they’ll need to secure a victory tonight and on Night 16, and Night 18. Viewers have learned not to sleep on Rusev. Rusev had a controversial upset win over John Cena on Night 4. Rusev also earned an upset victory on Night 12 against Shinsuke Nakamura. In the last round, Randy Orton picked up a quick victory against Baron Corbin with an RKO out of nowhere. Both these men fight dirty. The winner of the match will probably be the man who fights the dirtiest.

Match Highlights: Both men come face to face and stare each other down. Orton thumbs Rusev in the eye and hits a big European Uppercut that sends Rusev to the mat. Orton does the Garvin Stomp combo and follows up with a jumping knee to Rusev’s head. Orton goes for a cover and Rusev kicks out at one. Orton locks in a side headlock. Rusev fights up to his feet and stomps on Orton’s foot to break the hold. Rusev thumbs Orton in the eye and School Boys him holding the tights. Orton kicks out at two. Rusev throws Orton out of the ring and taunts the crowd.

Rusev goes out of the ring and drives Orton into the barricade. Rusev attempts to whip Orton into the steps, but Orton reverses it and sends Rusev crashing into the steps. Orton back suplexes Rusev onto a barricade and rolls back him in the ring. Orton slides into the ring and gets a near fall. Orton picks Rusev up and sits him on the top rope. Orton attempts a Superplex, but Lana kneels on the apron and holds onto Rusev’s feet. Orton notices Lana and gets off of the ropes and starts yelling at Lana. Rusev kicks Orton in the face and follows up with a diving clothesline off of the top rope. Rusev goes for a pin and gets a near fall.

Rusev attempts to lock in the Accolade. Orton slides out and attempts an RKO. Rusev pushes Orton off and follows up with a Machka kick for a near fall. Rusev gets the Accolade halfway locked in. Orton gets to the ropes before Rusev could fully lock it in.

Rusev attempts a Uranagi, but Orton counters it into the RKO. Lana jumps on the apron and distracts the referee. Orton goes over to Lana and says he’s not afraid to RKO her ass. The referee ejects Lana from ringside. Lana continues to argue with the referee as she walks up the ramp. Rusev low blows Orton behind the referee’s back and locks in the Accolade. Orton passes out from the hold and the referee awards the match to Rusev.

As mentioned earlier, Baron Corbin suffered an embarrassingly quick loss to Randy Orton in the last round. With only one victory thus far, Corbin is much like Ziggler. He can’t win the Block, but he can spoil it for someone. On night 12, Sami Zayn picked up his fourth victory of the tournament in a highly competitive match against Luke Harper. If Zayn can continue his winning streak for the remainder of the tournament he has a very chance of winning the Block.

Match Highlights: Corbin mocks Zayn’s height. Zayn fires up and delivers a series of big forearms. Corbin pushes Zayn down, but Zayn gets back up quickly. Corbin goes for a clothesline, but Zayn ducks and clotheslines Corbin out of the ring. Zayn attempts a dive, but Corbin moves out of the way before Zayn gets to the ropes. Zayn slides out of the ring. Corbin drills Zayn with a big clothesline and taunts to the crowd. Corbin picks Zayn up and tosses him to the barricade. Zayn jumps on top of the barricade and hits a moonsault on Corbin. Zayn rolls Corbin back in the ring and gets a near fall.

Corbin argues with the referee over the count. Corbin turns his attention back to Zayn. Corbin attempts a chokeslam, but Zayn reveres it into a DDT. Zayn goes to the top rope and hits a diving splash for a near fall. Zayn stalks Corbin and waits for him to pull himself up in the corner. Zayn attempts the Helluva Kick, but Corbin moves out of the way. Corbin attempts the End of Days again. Zayn blocks and hits a Reverse STO. Zayn locks in the Koji Clutch and forces Corbin to submit.

As mentioned earlier, AJ Styles defeated Kevin Owens in the last round. AJ is still suffering a nagging back injury that he received earlier in the tournament. In the last round, Luke Harper lost a very competitive match to Sami Zayn. Harper can’t afford another loss if he wants any chance of winning the SmackDown Block.

Match Highlights: Styles and Harper shake hands at the start of the match. Both men lock up. AJ puts Harper in a headlock, then transitions into a hammerlock, and then pushes Harper off. Styles does his signature taunt. Harper smiles at AJ and then both men lock up again. AJ locks Harper in a headlock. Harper pushes AJ off into the ropes. AJ runs back to Harper. Harper drops down and AJ bounces off of the opposite set of ropes. As AJ comes in Harper hits a big dropkick. Harper does AJ’s signature taunt. AJ smiles and nods at Harper. Harper goes in for a lock up again, but AJ just forearms him in the face. AJ follows up with the KENTA strike combo for a near fall.

AJ attempts to lock Harper in a single leg Boston Crab. Harper fights out and pushes AJ off. Harper gets up and hits a big palm strike. Harper tosses AJ over the rope, but AJ hangs onto the rope and recovers on the apron. AJ attempts the Phenomenal Forearm. Harper quickly runs in and knocks AJ off of the rope. AJ lands on the apron and then falls to the floor. Harper quickly bounces off the ropes and hits a suicide dive. Harper rolls AJ back in the ring and gets a near fall.

Harper picks AJ up and attempts a Running Powerbomb. AJ reverses it into a hurricanrana. AJ follows up with a running dropkick to Harper’s left knee. AJ starts working over Harper’s leg. AJ locks Harper in a Figure Four Leg Lock. Harper fights his way to the ropes. AJ releases the hold, pulls Harper the middle of the ring and locks the Figure Four on again. Harper flips over and reverses the pressure. AJ gets to the ropes. AJ is back up to his feet first. AJ hits several kicks to Harper’s left leg. AJ bounces off of the ropes, but Harper catches him with a Black Hole Slam for a near fall.

Everyone was surprised when Rusev defeated Shinsuke Nakamura on Night 12. It was only Nakamura’s second loss and he’s still in a good position to win the SmackDown Block. His opponent tonight, John Cena is also in a good position. Cena defeated Dolph Ziggler in the last round. This a big match for both Nakamura and Cena. Both men are tied at 8 points along with Styles, Zayn, and Owens. The winner of this match will solidify their position at the top of the Block.

Match Highlights: Both men lock up, exchange several holds, and end up in a stalemate. Nakamura smiles and tells Cena to bring it. Cena hits a running shoulder tackle that sends Nakamura to the mat. Cena bounces off the ropes. Nakamura jumps up and hits a leg lariat. Nakamura whips Cena into the corner. Nakamura lands a running knee strike that forces Cena to fall to a seated position. Nakamura does Good Vibrations. Nakamura backs up and tells Cena to bring it again. Cena pops up out of the corner and hits a big lariat. Cena goes for a cover and gets a one count.

Here are the rankings after round 7:

Here are the matchups for the last three nights of the tournament:

Night 17 – 9th Round of Raw Block: Seth Rollins vs. Finn Balor, Dean Ambrose vs. Braun Strowman, Roman Reigns vs. Cesaro, Bray Wyatt vs. Neville, and Samoa Joe vs. The Miz.