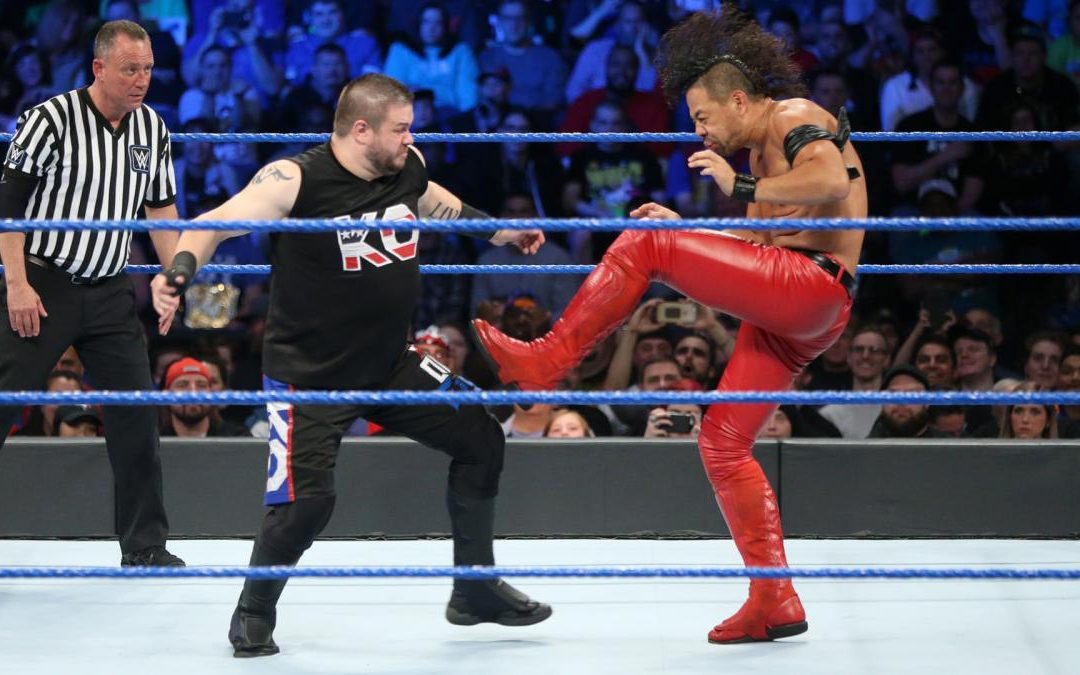 Welcome back to the WWE Fantasy G1 Climax Tournament. If you’re new to the series you catch up on the previous matches in the archives. Night 16 of the tournament will feature round 8 of the SmackDown Block. Here are the rankings going into round 8:

On Night 14 Randy Orton lost to Rusev after a low blow behind the referee’s back. With that loss, Randy Orton has been mathematically eliminated from winning the SmackDown Block. Tonight, Orton will be facing one of greatest rivals in John Cena and will be looking to derail him from a possible Block win. In the last round, Cena also suffered a loss. He had a great match with Shinsuke Nakamura but in the end, he couldn’t overcome the King of Strong Style. There’s still a chance for Cena to win the SmackDown Block. In order to do that he must win tonight and on Night 18.

Match Highlights: Cena attempts to shake Orton’s hand. Orton grabs Cena’s hand and pulls him in for an RKO. Cena pushes Orton off and attempts an Attitude Adjustment. Orton slips out and delivers a big kick to the back of Cena’s leg. Cena falls to a knee. Orton European Uppercuts the back of Cena’s head and goes for a cover. Cena kicks out at one. Orton initiates the Garvin Stomp. Orton attempts to follow up with a jumping knee strike. Cena rolls out the way and Orton’s knee goes crashing into the mat. Cena hits a big clothesline and sends Orton out of the ring. Cena rolls outside and picks Orton up. Orton quickly thumbs Cena in the eye. Orton then launches Cena into the steel steps.

Orton rolls Cena back in the ring. Orton hits a Full Nelson Slam for a near fall. Orton quickly follows up with a headlock. Cena fights to his feet and uses a back suplex to get out of the headlock. Cena attempts the five knuckle shuffle, but Orton counters and nails Cena with a DDT. Orton rolls Cena to the apron. Orton goes outside and attempts an apron assisted DDT. Cena fights out and rams Orton into the barricade. Cena attempts to put Orton through the announce table with an Attitude Adjustment. Orton slips out and hits a back suplex on the announce table.

Orton rolls Cena into the ring and gets a near fall. Orton picks Cena up and throws a right punch. Cena blocks and connects with a punch. Both men trade punches. Orton throws a wild clothesline but Cena ducks and catches Orton with a spinning back suplex. Cena hits the Five Knuckle Shuffle and the  Attitude Adjustment for a near fall.Cena picks Orton up and drags him to the corner. Cena goes to the top rope to attempt a Tornado DDT. Orton blocks it and grabs Cena and hits a rope-assisted DDT. Orton gets a near fall. Orton stocks Cena and nails Cena with an RKO, but for another near fall. Orton attempts another RKO, but Cena blocks it. Cena hits the Code Red for a near fall.

Cena attempts to whip Orton into a corner. Orton reverses and whips Cena into the referee. Orton attempts another RKO, but Cena counters and gets Orton into the STF. Orton taps, but the ref is still down. Cena tries to wake the referee up but has no luck. Cena turns around and Orton kicks him in the groin and hits an RKO. Orton drags the referee to the middle of the ring and Orton covers Cena and gets the three count.

Match Highlights: The bell rings and both men come face to face. Ziggler pie faces AJ. Both men trade strikes. AJ drops Ziggler with a clothesline. AJ follows up with a sliding forearm. AJ goes for a cover, but Ziggler kicks out at one. AJ hits a jumping knee strike. AJ picks Ziggler up and attempts the Ushigorshi. Ziggler fights out and hits a big dropkick. AJ rolls to the apron. Ziggler follows AJ to the apron. Ziggler hits a back suplex on the apron. Ziggler rolls AJ in the ring and gets a near fall.

Both men slowly come up to their feet and exchange strikes. Ziggler hits a knee to the jaw that stuns AJ. Ziggler takes AJ up top for a superplex. AJ slides out and drops Ziggler face first into the top turnbuckle. AJ misses a splash in the corner. Ziggler goes for a Superkick, but AJ catches it and locks in the Calf Crusher. Ziggler tries to get the rope but is forced to tap.

Match Highlights: Corbin attacks Harper on the way to the ring. Corbin whips Harper into the barricade. Corbin follows up by whipping him into the post. Corbin rolls Harper in the ring. The referee checks on Harper. Corbin pushes the referee and tells him to ring the bell. The referee calls for the bell. Corbin charges into to attack Harper. Harper pops up and hits the Discus Lariat for the win.

Match Highlights: Both men lock up. Rusev overpowers Zayn and pushes him back in a corner. The referee asks for a clean break. Rusev throws a big roundhouse kick but Zayn ducks it. Zayn throws several punches to Rusev in the corner. The referee separates Zayn from Rusev. Rusev takes advantage and sucker punches Zayn. Rusev grabs a waist lock and takes him down. Rusev grinds an elbow into Sami’s face and transitions to a reverse chin lock. Zayn fights to his feet, but Rusev takes him down and locks a side headlock on. Zayn fights to his feet again, he pushes Rusev off into the ropes. Zayn hits a big dropkick that sends Rusev out of the ring.

Zayn bounces off the ropes and jumps over the rope with the Tope Con Giro! Zayn rolls Rusev into the ring. Sami attempts a springboard attack but Rusev catches him with a thrust kick. Rusev goes for a cover and gets a near fall. Rusev picks Zayn up and throws Zayn into the ropes to get a free shot on his kidney with a forearm. Rusev locks in a big bear hug. Sami fights out with punches to the face, comes off the ropes for a crossbody but Rusev catches him and traps him against the ropes for knees to the ribs and then a fallaway slam. Rusev gets another fall.

Rusev puts Zayn on the top turnbuckle. Rusev attempts a superplex. Zayn fights out and pushes Rusev off of the top rope.Zayn jumps off and hits a big splash. Zayn clutches his ribs before he makes the cover. Rusev kicks out at 2. Zayn picks Rusev up. Rusev throws a wild strike, but Zayn ducks and hits the Half and Half Suplex for a near fall. Zayn attempts the Helluva Kick. As Zayn runs in, Rusev hits a jumping spinning heel kick. Rusev locks in the Accolade and forces Zayn to submit.

As mentioned earlier Shinsuke Nakamura defeated John Cena in the last round. His opponent for tonight Kevin Owens also had a victory on Night 14. Both of these men have the same record. This will be a pivotal match for both of these men. One man will continue to cement his spot at the top of the SmackDown Block while the other will take a big step backward.

Match Highlights: The bell rings and both men start exchanging strikes. Nakamura hits a hard forearm smash that sends Owens to the mat. Owens rolls to the floor for a breather. Nakamura taunts him from the ring and tells him to bring it. Owens slides back in the ring and attempts a double leg takedown. Nakamura sprawls and hits several knees strike to face and goes for a cover. Owens kicks out at 1. Nakamura picks Owens up and whips him into the corner. Nakamura hits several knee strikes to Owens in the corner. Nakamura backs up and in charges in but Owens nails a big boot. Owens then throws Nakamura into the post. Nakamura falls out of the ring from the impact.

Owens goes outside of the ring and stomps on Nakamura. He picks Nakamura up and whips him into the barricade. Nakamura falls to a seated position. Owens charges in and hits a Cannon Ball. Owens rolls Nakamura back in the ring and gets a near fall. Owens locks in a headlock. Nakamura fights to his feet. Owens quickly knees Nakamura in the midsection and drops him with a big DDT for a near fall. Owens argues with the referee about a slow count. Owens grinds a forearm into Nakamura’s face. Owens drops elbows to the face now. Owens attempts a running senton, but Nakamura moves out of the way. Nakamura gets back on his feet. As Owens start to get up, Nakamura comes in hits several kicks. Owens throws a wild clothesline but Nakamura ducks and hits a Landslide for a near fall.

Nakamura goes to the middle rope and attempts a mid-rope Kinshasa. Owens dodges and Nakamura crashes to the mat. Owens uses a School Boy and grabs the tights, but only gets a two count. Owens argues with the referee again. As Owens is arguing with the referee, Nakamura comes behind and tosses Owens with a German Suplex.  Nakamura takes Owens to the top rope for a superplex. Owens blocks and headbutts Nakamura off the top rope. Owens hits a Frogsplah for a near fall.