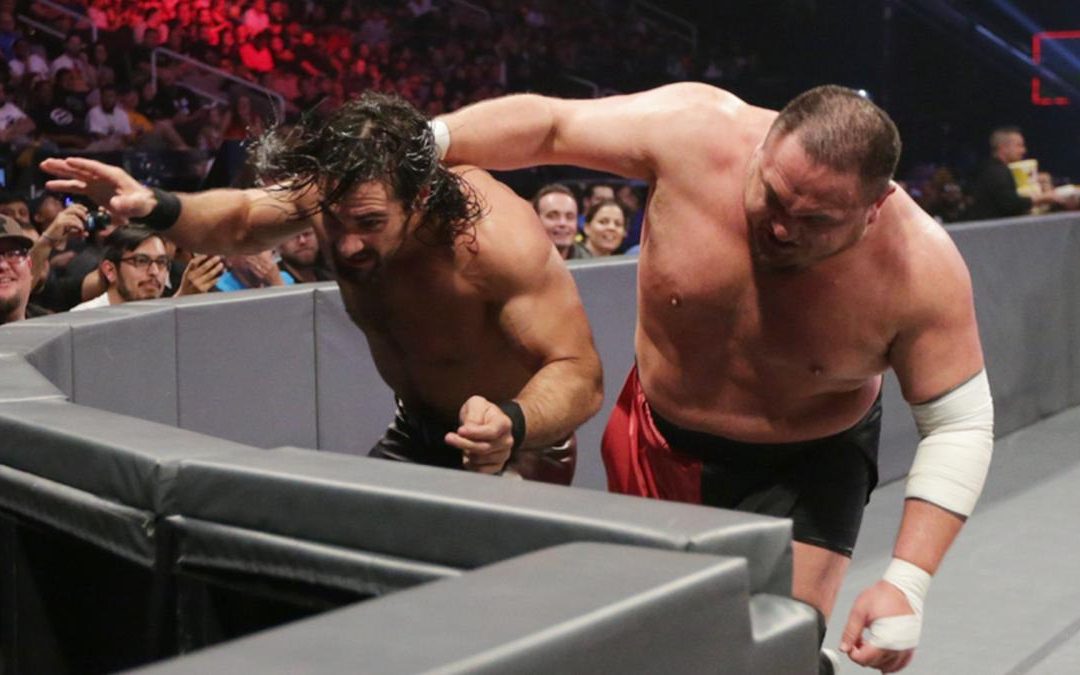 We’re almost half way through the WWE Fantasy G1 Climax Tournament. Tonight will feature the 4th Round of the Raw Block. Here are the Raw Block Rankings going into Round 4:

After a couple failed attempts, The Miz was finally able to utilize Maryse and the Miztourage to earn his first victory of the tournament. Now The A-Lister faces the Eater of Worlds. Despite his magic and mind games, Bray has failed to earn a victory. Bray desperately needs a win here if he wants any shot of winning the Raw Block.

Match Highlights:  Miz grabs a microphone before the start of the match.

Miz: Bray, clearly you need guidance from the greatest Intercontinental champion of all time. You need to join your brother and let me guide you to success. All you need to do is forfeit this match and I’ll let you in the Miztourage.

Bo extends his hand to Bray. Bray grabs Bo’s hand and laughs. The lights go on and off. Erick Rowan is now holding Bo’s hand and pulls him in for a short arm clothesline. Curtis Axel runs at Rowan, but Bray cuts him off and hits him with a Sister Abigail. Miz attempts to punch Bray. Bray blocks and hits a big throat thrust. Bray instructs Rowan to get Maryse. Rowan hoists Maryse on his shoulder and starts carrying her up the ramp.

The referee finally rings the bell to start the match. Miz realizes that Rowan has Maryse and makes a beeline to them. Miz pulls Maryse off of Rowan’s shoulder and hits a Skull Crushing Finale on Rowan on the stage. The referee is at the count of 7. Maryse tells Miz to go win the match. Miz sprints down the ramp and slides in the ring before 10.

Bray quickly grabs Miz and sets him up for Sister Abigail. Miz slips out of Bray’s grasp and slides behind him. He hits the Skull Crushing Finale for the win!

In one of the most shocking upsets of the tournament, Cesaro defeated Braun Strowman. Strowman didn’t take the loss lightly, as he destroyed Cesaro after the match. He’s still in a foul mood and will look take out his anger on Finn Balor. Balor was able to get his first win in the last round. He’s going to have to pull out every trick in the book to put a stop to the Monster Among Men.

Braun grabs Balor by the throat and tosses him into a corner. Braun charges at Balor for a shoulder tackle. Balor moves at the last second and Braun’s shoulder smashes into the post. Balor quickly goes to the top rope and jumps off with a front dropkick. Braun stumbles down to one knee. Balor follows up with a one legged dropkick to the face. Braun is now on both knees and Balor hits a modified Sling Blade. Balor goes for the cover. Braun kicks out at one.

Braun starts to sit up and Balor delivers a big Penalty Kick that puts Braun back on his back. Balor quickly goes to the top rope and hits the Coup De Grace for a near fall. Balor goes for another Penalty Kick, but Braun catches his foot. Braun gets up and drills Balor to the mat with a leg trapped chokeslam. Braun lifts Balor up on his shoulders and drops him with the Running Powerslam for the win.

As mentioned earlier Cesaro pulled off a shocking victory over Strowman in the last round. Cesaro didn’t get to celebrate long due to a post match attack from Strowman. Cesaro has been diagnosed with bruised ribs and was given the option to forfeit this match to heal up. The Swiss Superman refuses to forfeit and will compete tonight. Dean Ambrose was screwed out of a victory in the last round due to outside interference from Maryse and The Miztourage. The Lunatic Fringe will be looking to even out his win loss record tonight.

Match Highlights: Braun is still in the ring celebrating his victory over Balor. Cesaro jumps out of the crowd with a steel chair and slides into the ring. Cesaro blasts Strowman over and over again with chair shots to the back. Strowman quickly rolls out of the ring and retreats to the back. Raw goes to a commercial break.

Back from commercial break and Ambrose is in the ring. The bell rings and both men start chain wrestling. Cesaro ends up with a headlock on Ambrose. Ambrose fights out by punching Cesaro in his bruised ribs. Ambrose whips Cesaro into the ropes and takes him down with a running knee to the mid section. Ambrose locks in an abdominal stretch and wrenches his elbow in Cesaro’s ribs.

Ceasro counters the abdominal stretch into a hip toss. Cesaro double foot stomps Ambrose and bounces off of the rope and hits a sliding European Uppercut for a near fall. Cesaro attempts a gutwrench suplex. Ambrose throws wild knee strikes to Cesaro’s ribs to escape. Ambrose hits a gutbuster for a near fall.

Ambrose goes to the top rope and attempts the Lunatic Elbow Drop. Ceasro counters by uppercutting Ambrose in mid-air. Cesaro goes for a pin fall and Ambrose kicks out at two. Cesaro attempts the Neturalizer. Ambrose reverses it into a back body drop. Cesaro rolls out of the ring. Ambrose quickly bounces off of the ropes and hits a suicide dive.

Ambrose gets Cesaro back in the ring and tries to execute Dirty Deeds. Cesaro blocks it and gets Ambrose set for the Cesaro Swing. Ambrose fights out before Cesaro can swing him. In the process of escaping Ambrose pushes Cesaro into the referee. Both men start exchanging strikes.

Cesaro hits a big European Uppercut and hits the Netrualizer.  Strowman’s music hits and he comes storming down the ramp into the ring. Strowman clotheslines Cesaro and delivers the Running Powerslam. Strowman leaves the ring and the referee starts to get back up. Ambrose crawls into a pin fall on Cesaro and gets the win.

The injured right knee of Neville has really hindered his performance in the tournament thus far. Neville refuses to forfeit any match and plans to continue to fight through the pain. He’s definitely going to be in for a fight tonight against Roman Reigns. Roman is also suffering from a nagging shoulder injury. He was choked out by Samoa Joe in the last round and is looking to get back on track tonight.

Match Highlights: As soon as the bell rings, Neville hits a running front dropkick. Neville lands a Standing Shooting Star Press for a near fall. Neville wastes no time following up with a Standing Corkscrew Splash for another near fall. Roman rolls out the ring to catch his breath. Neville punches his left knee and bounces off the ropes. Neville jumps over the top rope with a Corkscrew Plancha and wipes Roman out.

Neville gets Roman back in the ring for a near fall. Neville goes to the rope and attempts the Red Arrow. Roman moves at the last second and Neville crashes to the mat. Roman drills Neville to the mat with a crucifix bomb for a near fall. Roman whips

Roman whips Neville into a corner. Roman clotheslines Neville ten times. Neville staggers out of the corner. Roman hits a jumping head butt which sends Neville to the mat. Roman sets up for a Superman Punch, but Neville rolls out of the ring to avoid it. Roman quickly bounces off of the ropes and dives on Neville. Roman looks at the fans and says “the Big Dog can fly too!”. Roman rolls Neville back in the ring.

Roman goes to pick Neville up. Neville grabs Roman’s right hand and locks in an armbar. Roman gets to the ropes to break the hold. Neville lands a hammerlock back suplex which drops all of Roman’s weight on his right arm. Neville goes for the cover and Roman kicks out at two. Neville locks in the Rings of Saturn. After several minutes of being trapped in the hold, Roman finds a way to the ropes.

Neville attempts a dead lift German Suplex, but his knee buckles and has to let go of Roman. Roman takes advantage and hits Superman Punch for a near fall. Roman goes for a Samoan Drop. Neville wiggles out and hits a reverse DDT for a near fall. Neville goes to the rope and attempts a 450 Splash. Roman moves out of the way, but Neville rolls through. Neville charges at Roman. Roman hip tosses Neville into the corner. Neville’s knee bounces off the top rope. Neville struggles back up to his feet and Roman blasts with him a Spear for the win.

Both of these men are walking into this match undefeated. One of them will walk out of the match with a loss. Seth Rollins is coming into this match with an injured neck. Samoa Joe has choked out his last three opponents with the Coquina Clutch. Joe will be looking to make Rollins the 4th victim of the deadly hold.

Match Highlights: Rollins and Joe lock up. Joe goes a rear waist lock and attempts the Coquina Clutch. Rollins slips out and gets behind Joe. Rollins attempts the Rainmaker Knee, but Joe counters with a short arm clothesline. Joe drops a jumping knee on Rollins’ face. Joe sits Rollins up and starts cranking on his neck. Rollins fights out of the hold. Rollins hits a big jumping knee that sends Joe flying out of the ring.

Rollins attempts a suicide dive, but Joe punches him in the face, mid dive. Joe Snake Eyes Rollins on the barricade. Joe brings Rollins up on the apron and attempts a DDT. Rollins fights out and both men start exchanging chops. Rollins gets the better of the exchange and hits a Slingblade on the apron. Rollins gets Joe back in the ring and gets a near fall.

Rollins attempts a Pedigree again. Joe counters the Pedigree into a Death Valley Driver for a near fall. Joe pulls Rollins up by his hair and starts slapping him. Rollins fires up and hits a jumping knee. Joe staggers back into a corner. Rollins charges in and Joe catches him with an ST-Joe. Joe takes a few minutes to catch his breath. Rollin is pulling himself up using the ropes. Joe gets up and locks in the Coquina Clutch in a standing position. Joe goes to drop back and Rollins pushes his feets off of the ropes at the same time. Rollins ends up on top of Joe and gets the win.

Raw Block Rankings after Round 4:

Another exciting night of action has concluded. Seth Rollins gave Samoa Joe his first loss of the tournament and is now in first place. Rollins’ lead is not by much and will need more performances like tonight to secure the victory of the Raw Block. Samoa Joe, Braun Strowman, and Roman Reigns are right on his trail.