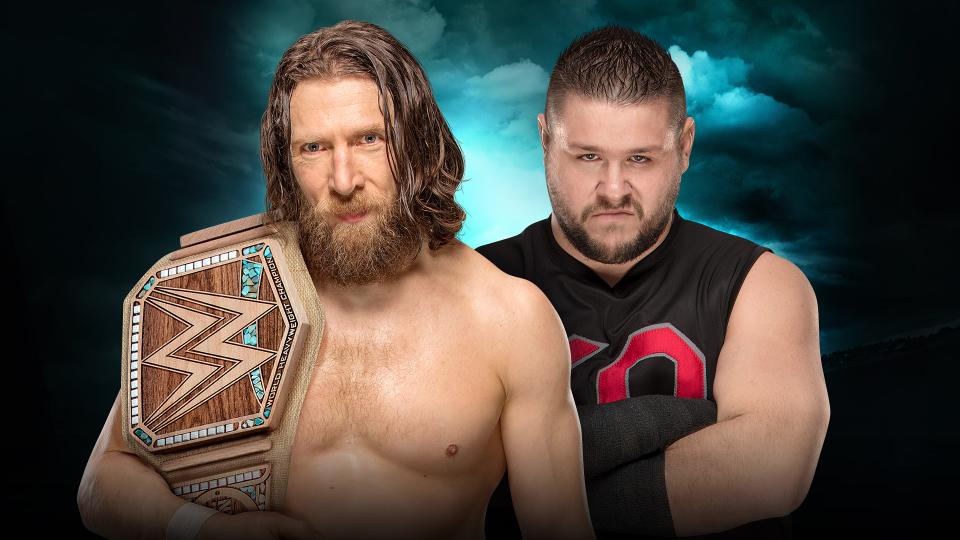 James Boyd – Co-host of One Nation Radio on the Social Suplex Podcast Network.

Jeremy: This match will probably be great, but how many people will watch it? Going with Mysterio because it seems like the recent Andrade push is OVAH!  Pick: Rey Mysterio

Rich: WWE told me the pre-show doesn’t matter and I refuse to watch it. I’m sure this will have commercials in between Canadian destroyers. If they didn’t see fit to put this on Fastlane, why would it be on Wrestlemania? Pick: Rey Mysterio

Ricky: Why is on this on the pre-show?!  Regardless, these 2 will have another great match. Pick: Rey Mysterio

Clive: Some of your favorites are on the pre-show? Welcome to my world. No sympy here! Should be a great match as per, though. I can see Mysterio winning in the lead up to Mania. Pick: 619

Caleb: Andrade gets the win on the minor show. Pick: Andrade

Tom: I’m sure it’ll be a good match but it’s a match nobody is gonna watch…I’ll say Andrade gets the win here, but it’s not the final time they face each other…Also how in the hell do we have Rey on the pre-show? Pick: Andrade

Floyd: They will have the best match most people will never see. Really looking forward to what banned moves Rey is able to pull off in this match. Andrade wins to win the feud and move on. Pick: Andrade

The Revival (Dash Wilder and Scott Dawson) (c) vs. Aleister Black and Ricochet vs. Chad Gable and Bobby Roode

Jeremy: WWE has done a great job thus far of protecting Blackochet. However, with Blackochet still competiting in NXT I don’t see them winning the titles here. I expect The Revival to get the win on Gable and Roode. Pick: The Revival

Rich: Gable and Roode inserted themselves because there is a job to be done. The Revival will win then lose on Monday Night Raw in a nontitle match. Pick: The Revival

James: They’ll have a great match that won’t matter 2 weeks from now. Pick: The Revival

Ricky: Should be a really good match but I don’t see The Revival losing. Pick: The Revival

Clive: The Black & Ricochet Harlem Globetrotter Multi-Brand tour continues. They’ll wow the crowd but will come up short as Revival sneak the win. Pick: The Revival

Caleb: No way Team NXT wins here. I’ll take The Revival to retain and win their third match of the year. Pick: The Revival

Tom: I think Black and Ricochet wind up winning the titles, but I think they do it at Wrestlemania, so I’ll say The Revival retain here. Pick: The Revival

Floyd: I’m predicting this match to be the match of the night. Having Roode/Gable in the match allows The Revival to retain without Black/Ricochet taking the pin. Pick: The Revival

The Usos (Jey and Jimmy Uso) (c) vs. The Miz and Shane McMahon

Jeremy: I think we’ll get an angle here that will lead to a Shane/Miz Match at Wrestlemania which will steal the show because SHANE MCMAHON IS THE BEST IN THE WORLD!!!!! Pick: The Usos

Rich: I’d like The Usos to turn this to a 5-minute whiteboy challenge, and take Shane’s shoes after the match cause he’s a . Pick: The Usos

James: They’ll have an okay match that will lead to a Shane vs Miz Wrestlemania match that only Vince McMahon and the worst of human civilization wants to see. Pick: The Usos

Ricky: This is where Miz turns on Shane setting up their match at WrestleMania. Pick: The Usos

Clive: Haven’t cared so little for a program in a long time. Miz Sr to get a coast to coast by accident or some such terribleness. Pick: The Usos

Tom: I’ll say a no contest…I don’t know who interferes to set up a multi-team match at Mania, but someone does. Pick: No Contest

Floyd: USOS!!! The Usos will be amazing as usual, Shane will jump off something high, and the Miz will take the pin blaming Shane for letting down his Dad setting up the match no one wants to see at Mania. Pick: The Usos

Jeremy: I can’t think of one good reason why Nia Jax and Tamina should win. Pick: Boss ‘n’ Hug Connection

Ricky: I’m not expecting too much from this match but I’d be surprised if Sasha & Bayley don’t retain. Pick: Boss ‘n’ Hug Connection

Tom: C’mon, they’re not stupid enough to have these titles change hands in their FIRST EVER defense, are they? (Spoiler alert: They are) I’m picking Boss ‘n’ Hug connection to retain, and yelling “Give us Bayley & Sasha vs Io & Kairi!” at my tv screen for the duration of the match. Pick: Boss ‘n’ Hug Connection

Floyd: This will be the carry job of all carry jobs as Sasha and Bayley try to make Nia & Tamina look respectable. Pick: Boss ‘n’ Hug Connection

Jeremy: I think Mandy Rose has some potential and it was a big disservice to pluck her out of NXT so early. I think Asuka will guide Mandy to a nice little 3 Star PC special and retain the title. Pick: Asuka

Rich: Mandy has yellow hair which Asuka has struggled with at times, but tonight it won’t help. She’s not the yellow hair they want right now. I imagine Lacey Evans country ass shows up somewhere. Pick: Asuka

Clive: Mandy has the best V-Trigger on the planet right now….. but it won’t be enough to beat Asuka this close to WrestleMania XXXV. Pick: Asuka

Caleb: NO ONE is ready for Asuka. Pick: Asuka

Tom: Another “They’re not stupid enough to….” match and another match where they ARE, in fact, stupid enough to put the wrong person over. I think Asuka wins but not decisively. Pick: Asuka

Floyd: ASUKA!!! This will be boring: Asuka

Jeremy: You would think the pick that makes the most sense would be Becky to set up the triple threat. But this WWE and love to make their storylines convoluted. We’ll see some shenanigans and gimmicks that ends up costing Becky the match. Then they’ll come up with a gimmick on Raw that gets Becky into the Mania match. Why can’t these guys just do simple booking? Pick: Charlotte

Rich: The easy thing is Becky winning the match and going back in the match at Wrestlemania. So, of course, I’m picking that WWE does the exact opposite. Something backfires on Becky and Charlotte steals a win. Pick: Charlotte

James: They’ll have a shenanigans fest that will further convolute their paths towards Wrestlemania. Pick: Charlotte

Ricky: Every match these two have had has delivered in every way possible and this shouldn’t be any different. Becky wins, of course, setting up the triple threat match at WrestleMania, maybe Ronda interferes. Pick: Becky Lynch

Clive: Becky will forget to sell her bum leg numerous times, pander to the crowd, and probably walk about with a shit eating grin the whole time. I can see Ronda interfering and hitting Charlotte by accident or something allowing Becky and easy into the Mania match. Pick: Becky

Tom: I’m calling Rousey interference. If Becky’s winning at Mania, WHICH SHE SHOULD, she should win the title, not retain it. And if she’s gonna win the title at any point, it should be at Mania. Combine the two, it adds up to Rousey interfering. No contest

Floyd: Charlotte looks like she is going to win. Becky crashes and causes Charlotte to be DQ’d. She then beats them both up setting up the Triple Threat Match at Mania. Pick: Becky by DQ

Jeremy: I have a hard time seeing Owens losing clean in his big return PPV match. I’m thinking there will be some outside interference that causes Bryan to retain via disqualification which sets up Bryan defending against Owens and Kofi at Mania. Pick: Kevin Owen by DQ

Rich: When was the last GREAT Kevin Owens match? He’ll have his chance here, and he needs it. Pick: Daniel Bryan

James: They’ll have a great match that gets downgraded to only “very good” because of a bullshit finish that won’t matter 2 weeks from now. Pick: Daniel Bryan

Ricky: I’m not sure how I feel about Kevin Owens being in this spot because I don’t want him losing his first significant match since his return from injury. I believe we will get Daniel Bryan vs Kofi at WrestleMania though. Pick: Daniel Bryan

Clive: Similar to the Becky Charlotte match, some shenaniganry will play out with some interference from either Kofi or Ali. Should be a great match though. Pick: Daniel Bryan

Tom: It’s KofiMania. That’s what this all leads to. It has to. Kevin Owens doesn’t fit into that. Bryan wins, and we get New Day vs Bryan & Rowan promos all the way to Mania. Pick: Daniel Bryan

Floyd: My most anticipated match because it could be 5 stars or complete crap because of overbooking. I think Rowan gets involved and Bryan wins. Pick: Daniel Bryan

Jeremy: This whole match they’ll be teasing if Ambrose will be a team player. Ambrose will restrain self enough for the Shield to get the win. After the match I think Ambrose will attack Seth and Roman which sets up Roman versus Dean at Mania. Pick: The Shield

Rich: The Tempta— I mean The Shield is about to lay waste to the worst set of opponents they’ve likely ever faced. How does Ambrose un-burn his flak jacket? Why hasn’t Reigns punched Ambrose directly in the face? What on earth does this do for Seth Rollins momentum?  Pick: The Shield

James: They’ll have a fun match that will lead  Reigns down his path to Wrestlemania. Pick: ROLLINS, REIGNS AND THEIR “YANO”.

Ricky: This may be unrealistic but I’m going with The Shield to lose with Ambrose costing them setting up Roman vs Ambrose at WrestleMania. Pick: Drew McIntyre, Bobby Lashley, and Baron Corbin

Tom: C’mon. The Shield. In their first match back. The F**king SHIELD. THEY ARE NOT LOSING! Get Lavar Ball in here to yell “NEVA LOST” at Corbin, McIntyre, and Lashley. Shield win, Triple Powerbomb Corbin the Big Baller way, and we roll onto Mania. Pick: The Shield

Floyd: YAWN, The Shield wins again. Corbin takes the pin. Who cares? Hopefully, Brock shows up and destroys them all after the match, but is Vince willing to pay half a million for that? Probably not. Pick: The Shield