WWE Money In The Bank 2015 Predictions 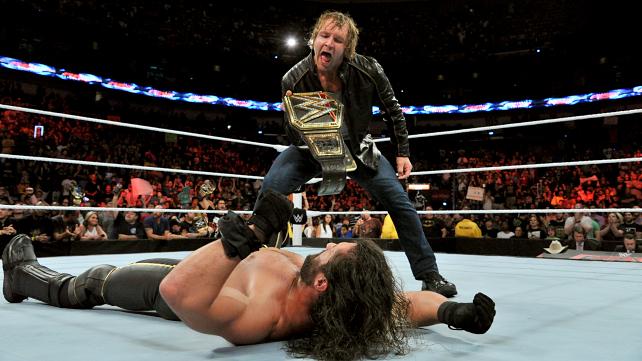 WWE Money In the Bank 2015 has definitely sneaked up on us this year. They only had two weeks to build up the show and the build was not as good as Elimination Chamber. WWE is shooting itself in the foot with these back to back shows. The highlight of this show is supposed to be the Money in the Bank ladder match, but I think the Owens/Cena match or the Ambrose/Rollins ladder match will end up being the focal point of this show. Here’s the rundown of the card and my predictions. 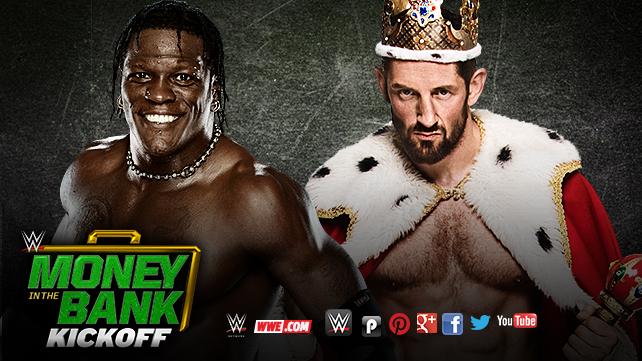 Well winning the King of the Ring tournament has done Barrett no favors. It seems no matter how many titles or tournaments Barretts win he will always be stuck in the low to mid-card matches doing the JOB! Let’s not forget about poor Truth. He conquered his fear of ladders only to find out he is not in the Money in the Bank Ladder Match. Maybe next year Truth. I think this will be an okay match with King Barrett picking up the win. 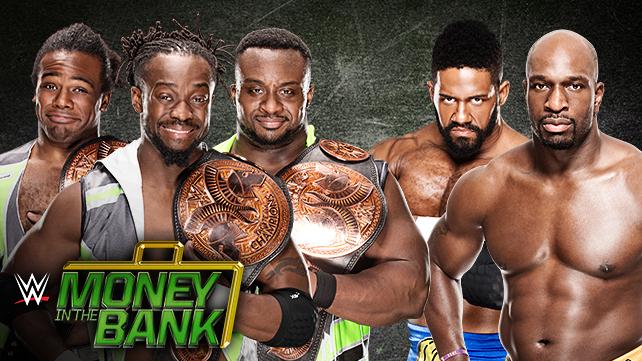 The New Day is one the best acts right now on WWE. These guys have done an excellent job at antagonizing the crowd. It feels like every time the crowd chants “New Day Sucks, New Day Sucks” they get more and more obnoxious. The Prime Time Players have picked up some momentum too. I’ve always been a fan of the Prime Time Players. I never understood why they separated them in the first place especially since both of them spent a majority of their singles run on Main Event and Superstars. Titus can easily be a top mid-card guy, but it looks WWE will never strap the rocket on him. As much as I would love for PTP to win their first tag titles, I don’t think it’s time for the New Day to drop the belts just yet. I can see the New Day running with the belts for the remainder of the year. 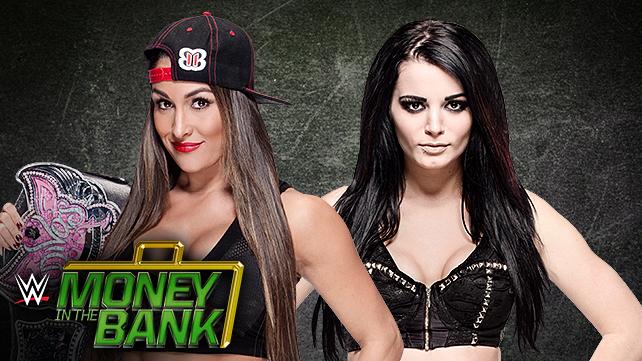 If you have been following Social Suplex for awhile you know I’ve been on the Nikki Bella bandwagon for a long time. Even though I’ve been a fan of Nikki, I honestly think this should have been Naomi defending the title against Paige. Regardless, this should be a good match. If they give them more than 5 minutes the match could be great. The game plan right now seems to be to keep the belt on Nikki until she beats AJ Lee’s title reign. I see Nikki retaining here. Part of me has a feeling Nikki is going to attempt twin magic again but get caught this time which will lead to a DQ. This keeps the belt on Nikki and gives the returning Paige a win. The Divas division is desperate for an injection of NXT women. 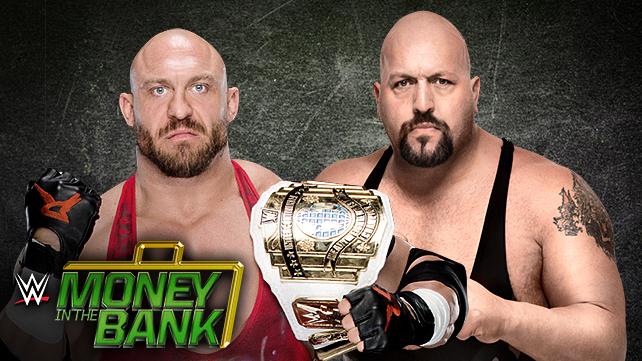 I am so happy that Ryback won the Intercontinental title at Elimination Chamber. I’ve received some flack from some of my buddies for endorsing The Big Guy. I don’t know what it is, but I find Ryback very entertaining. He’s definitely not the best technical wrestler, but he leaves his heart out in the ring. Creative has dropped the ball so many times with him it’s good to see him finally catching a break. I would be very surprised and disappointed if Big Show won. The last thing Big Show needs is an Intercontinental title run.

Money in the Bank Ladder Match:
Neville vs. Sheamus vs. Randy Orton vs. Roman Reigns vs. Kane vs. Dolph Ziggler vs. Kofi Kingston 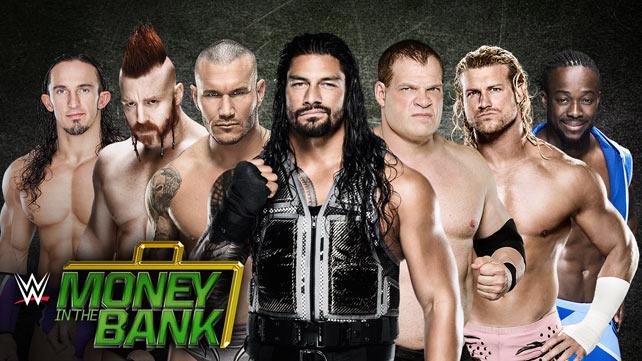 I feel the two-week build has really killed the excitement for this match. I really wish they would go back to doing qualifying matches to have wrestlers earn their way in the match instead of just randomly picking the guys. I think it would add more to the story of this match. Honestly, the only person I see walking out with the briefcase is Roman Reigns. It’s too soon for Neville to get thrown in the main event picture. Sheamus really hasn’t gained any momentum or done anything of significance since his return. Orton has won the bank before and doesn’t need to be in the title picture right now. Kane has also won the briefcase before and it’s time for him to be put out to pasture. Ziggler is another guy has won the briefcase before. Despite being a great in-ring performer, Ziggler’s character has grown stale. It would be interesting to see Kofi win it, but if he won would really “Freebird” the briefcase with Woods and Big E? Reigns has been intertwined in the WWE title storyline since he won the Royal Rumble. After getting screwed at Mania, this is the perfect place for him to win and stick it to the Authority. There are several directions they can go with Reigns winning the briefcase. I believe Reigns will win his first WWE Championship before the end of the year. 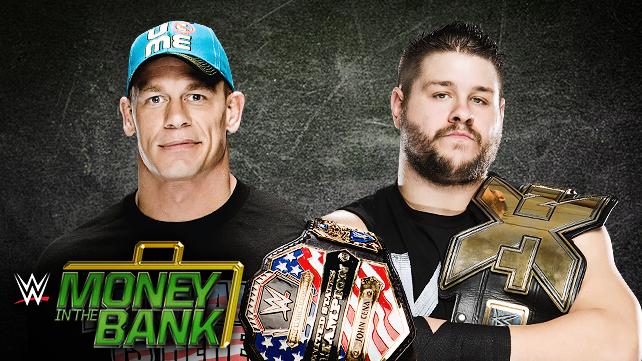 A report went out this week stating that were a few NXT talents upset that Kevin Owens was promoted to the main roster so quickly. The past few weeks Owens has proved he is more than ready to be on Raw and Smackdown. His promos and in ring skills are amazing. I marked out so hard when he beat Cena CLEAN at Elimination Chamber. That win legitimized Owens as a threat to anyone on the main roster. I don’t understand why they have Cena no selling his loss to Owens. Cena should be more distraught and questioning himself. Regardless this should be another great match between these two. I’m not sure why the United States title isn’t on the line. It’s hard to think creative would book Cena to lose again to Owens, but it would be the right thing to do to continue the elevation of Owens. I feel like they’re going to try and stretch this rivalry out for the whole Summer. So I think Cena will be the next victim of the Pop-Up Powerbomb on the apron. This makes Owens look like a monster and Cena can be off of TV for July and return to face Owens one last time at SummerSlam where Cena can finally get a victory. 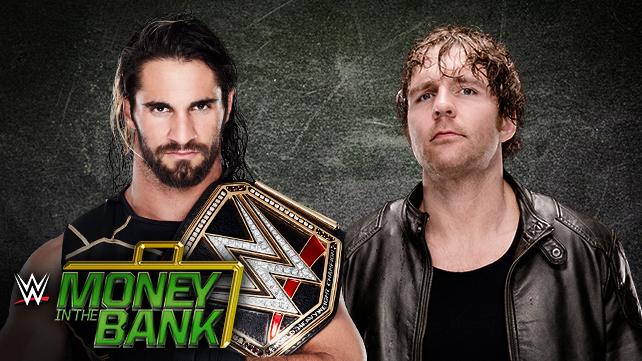 Much of like the rest of the internet and the fans at Elimination Chamber, I exploded when I thought Ambrose won the WWE Championship. Then WWE pulled the “Dusty Finish” (RIP Dusty). Ambrose playing keep away with the WWE title has been pretty entertaining. With all the momentum that Ambrose has been building I can’t see him leaving this show with the title. Rollins retaining the title makes the most sense especially since Brock Lesnar is scheduled to return to Raw the next night. There’s also a possibility of Reigns cashing in the middle of this match. When Reigns was talking about this match he said WHOEVER climbs the ladder and grabs the belt will be the WWE Champion. If Reigns wins the Money in the Bank and cashes in the contract in the middle of the match all he would have to do is climb the ladder and grab the belt. This definitely would make Reigns a heel because everybody wants Ambrose to win. If they want to keep Reigns face, which I think they do, they could have him cash in after Rollins wins. Another option would be to have Rollins defend against Lesnar at BattleGround, then Reigns cashes in like Rollins did at Mania bringing everything full circle. It’ll be interesting to see how this match plays out. No matter the outcome Ambrose and Rollins always deliver when they’re in the ring together and match will be no different. This could be a match of the year candidate.

What are your predictions for WWE Money In The Bank 2015?