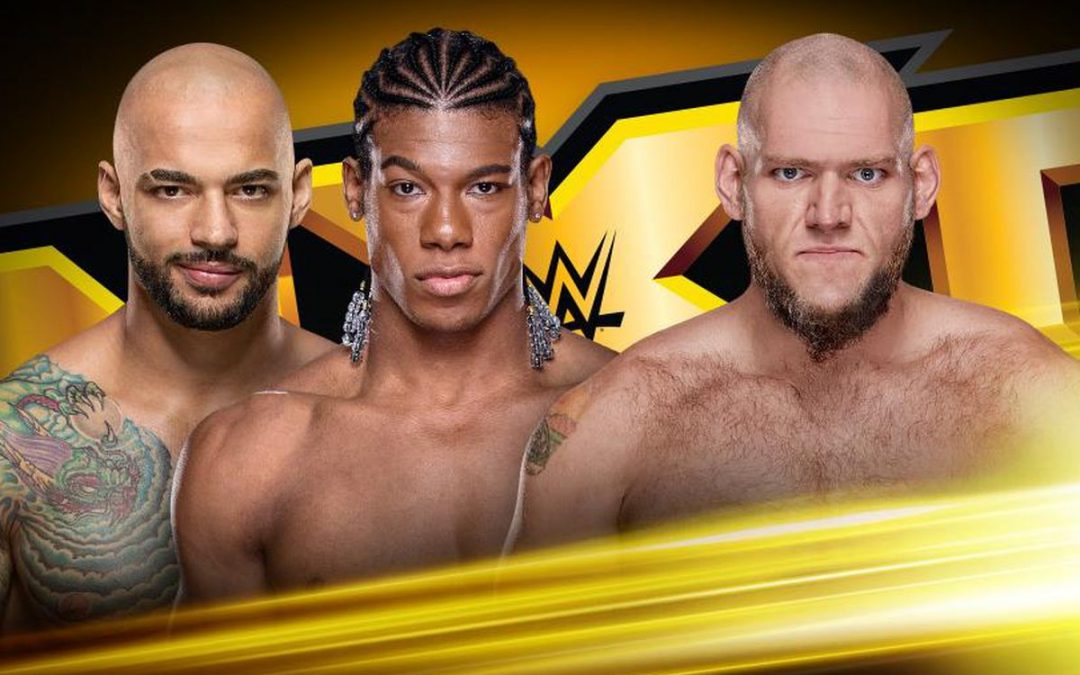 Sup, Marks? Did you forget about NXT? If you’re like me you’ve been watching a whole lot of Best of Super Juniors matches this week (shout out to SHO Michaels for bringing the heat), but WWE’s real A-show kept rolling on this week.

On the whole, tonight’s episode was full of moments that made me say “well, this needed to happen at some point”. There are only 3 episodes of NXT TV left before Takeover: Chicago, so those “this needed to happen” moments needed to start, er…happening. Without any further delay, let’s get into what those moments were.

Any episode of NXT (or literally ANY TV show, come to think of it) that has Heavy Machinery in it at all is a good episode, so you can imagine my excitement when the beefy boys opened the show. They had a match against the Australian Best Friends, who…MIGHT…be heels now? It sure seems that way considering they’ve won their most high profile matches recently with feet on the ropes. No matter what they are (I’m leaning heel), TM61 won their match after Otis Dozovic got kicked off the rope. Y’know what? TM61 are definitely heels now. We were about to get what I can only assume was gonna be a double moonsault from Otis Dozovic, and Shane Thorne & Nick Miller ROBBED us of that. I’m booing them from now on. How dare they. Ohhh I’m mad.

After that match we got a brief video package on Bianca Bel Air, it seems we’re going to be getting some “Who is Bianca Bel Air” segments over the next few weeks. It’s a good idea because those videos will fill some time on NXT TV as we get closer to Takeover, and who knows? Maybe Bianca Bel Air gets a little bit of a push this summer. I definitely wouldn’t hate to see that.

EC3 also got a video package this week, and in all honesty, it didn’t say a whole lot. It felt a lot like NXT saying “Hey! Remember him! He’s still here!” Of course, it was still entertaining as all hell because EC3 seems to be a savant at turning otherwise stupid stuff into gold. While we’re on EC3…I’m not sure where he fits into the next takeover card. I can’t imagine he completely gets left off, but at the same time, there’s no real spot for him. Ricochet and The Velveteen Dream are presumably facing each other after tonight’s episode (more on that in a minute), Aleister Black vs Lars Sullivan seems to be the direction they’re going for the NXT Title…does EC3 challenge Adam Cole for the North American championship? I think that’s about as good a heel vs heel match as we could get, but I also don’t think Cole and the Undisputed Era done with Pete Dunne & friends (whoever those friends are). My gut says this is just NXT saying “EC3 is gonna be here for maybe a minute, no need to really push him in NXT when he’s main roster ready”.

I wrote a lot about Lacey Evans in last week’s NXT review, and while she had another strong in-ring performance this week, there was only one thing that stood out to me from this match. Kairi Sane hit a DESTINOOOOOOOOOOOOO and it was just a transitional move. This match did a really good job of developing but not ending the feud, which is impressive because Evans won without any of the conventional dirty heel tactics. The dirtiest thing she did was roll out of the ring when Sane was going to the top rope, and that’s not even dirty. It’s just smart. Also, the “woman’s right” as a finisher…let’s talk about it. Personally, I don’t like punch finishers at all, because (in my mind) they kinda defy wrestling psychology. If the only thing you need to do to finish a match is punch someone in the face, that seems like something you could do at the start of a match. If we’re doing punch finishers now, this one really isn’t that bad. But I wanted to make a note of my dislike for punching finishers. One last thing with Lacey Evans, I shudder to think of the day Vince McMahon sees her. There are few things Vince McMahon likes as much as blondes and troops and Lacey Evans? Well, she’s both.

After that match, we got an ominous interview with Johnny Gargano and Candice LeRae. Johnny & Candice were walking into Full Sail and Johnny mentioned talking about his “future”. More on this later.

The next thing we saw was Team 1-2 (Lorcan & Burch) backstage, saying that they felt they’d earned a shot at the NXT Tag Team titles. While I love Lorcan & Burch and would LOVE to see them get a Takeover match, I never thought they’d actually get the push. Undisputed Era responded with a typical backstage promo of theirs, Kyle O’Reilly called Pete Dunne Pete “Dune”, it was so enjoyable.

I’m gonna start off here making a positive note about Lars Sullivan, NXT always does this “King Kong” shot during his entrance, and it’s an incredibly effective tool to put over Lars Sullivan, who in real life is only 6’3, as a legit MONSTER.

Now, as far as Sullivan’s match against Dream & Ricochet goes, it was perfect. As a viewer you could see Dream & Ricochet formulate a plan on the fly, then get better and better at executing that plan, to the point where I was watching this going “damn, are these two about to go over?” and then the Dream turned and hit Ricochet with a cartwheel press. It played with the audience’s emotions pretty perfectly, and it made everyone involved look better. I said in last week’s NXT review that I didn’t know how this match could really work, and I’ll admit I was wrong on this one. This match was booked perfectly. And the cherry on top is that we’re going to get Velveteen Dream vs Ricochet, most likely in Chicago.

After that handicap match, there was a backstage interview with PTSDakota Kai, and I will say, the gears are starting to turn on this whole “Dakota Kai overcoming the bully Shayna Baszler” storyline. Kai told Cathy Kelly the NXT Women’s championship match against Shayna Baszler (which is happening next week) was a dream come true for her. Shayna Baszler walked in on that interview, and Dakota started talking considerably less. But the key here was Baszler saying “you know you’ve got no chance, right?”, and Dakota Kai responding with “we’ll see about that”. That little bit of defiance from Dakota Kai is the kind of nuanced stuff you just don’t get on the main roster. Is Dakota Kai completely over the bullying from Shayna Baszler? Not yet she’s not. But the wheels are starting to turn.

Finally, we got to our main event, which tonight was a promo segment. And that, my friends, is the power of Johnny Gargano. Johnny teased a retirement angle earlier in the episode, but now, in front of the crowd, it was real. We were watching Johnny Gargano, the biggest babyface NXT had ever seen, tell us he had questioned if continuing to wrestle was worth it. And the kill switch was when Gargano ripped off his neck brace and said: “YEAH IT’S WORTH IT!”. Gargano called out Ciampa, Ciampa came out, Candice ran and got the refs, and the refs got in between Ciampa and Gargano. After some jostling and scrambling, Gargano tried to hit the ring, and Ciampa shot off the ropes and bumped Gargano off the apron into Candice LeRae. Candice stayed on the ground until the end of the episode, and we closed out the week with that. Ciampa is evil. That is a fact. This Ciampa-Gargano feud is so good already I really have no words that could add to it.

And that about sums up this week’s edition of NXT. Heavy Machinery lost, Kairi Sane lost, Ricochet AND the Velveteen Dream lost, and it was still a good episode of TV. We didn’t get that typical high profile main event match that we usually get on NXT TV, but we did get a TON of storyline development.