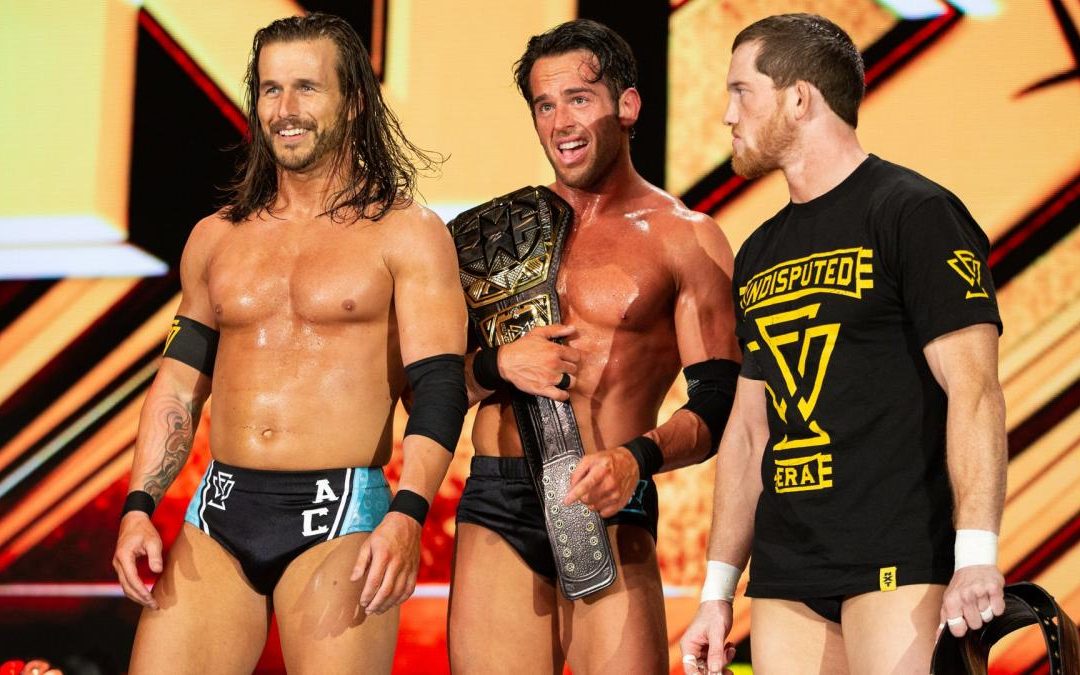 What’s up readers? It’s time for another electrifying review of WWE’s true A-show, the Black & Yellow Brand, Paul Levesque’s Personal Promotion, N! X! T! This week was the first episode in a new set of tapings, which usually means a lot of foundation setting segments. BUT, the good thing about NXT is that those “foundation setters” are still fun to watch. So on that note, let’s get to it.

The episode started with Cathy Kelly interviewing William Regal, who informed the NXT universe that he was starting a formal investigation into who attacked Aleister Black. While most “formal investigations” performed by high ranking sports officials end with somebody getting a half-assed punishment, this one will most likely end with somebody getting kicked in the face! 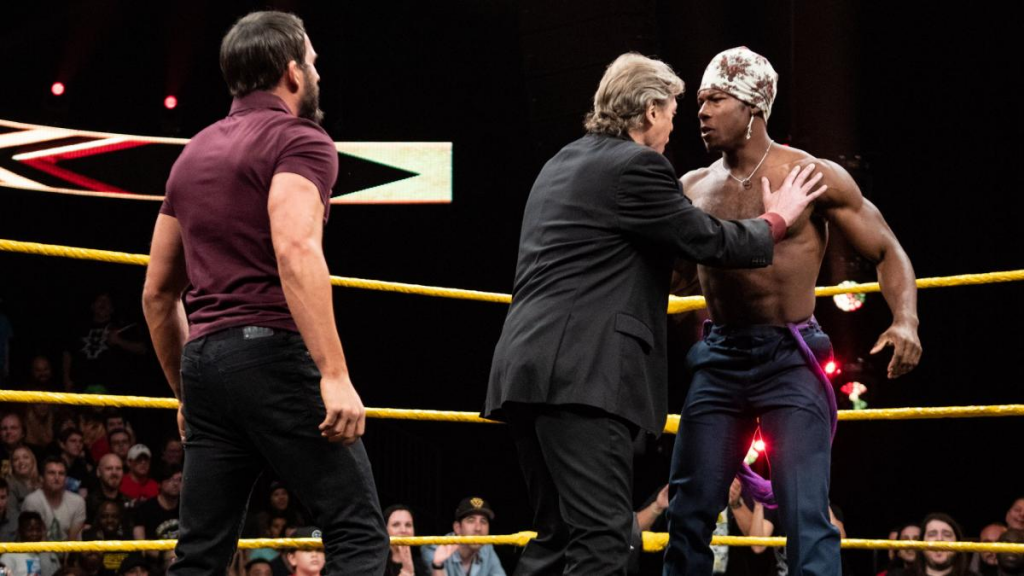 So in this foundation setter episode, it makes sense that the person to kick things off would be Johnny Gargano. He’s been the main storyline on NXT for this entire year, and even though he lost in Brooklyn he’s still the top babyface on the show. Gargano started telling the crowd about how he didn’t just lose the match in Brooklyn, he lost himself, and he needs to be better. I’m gonna be honest, this was the first moment with Gargano’s character that he wasn’t connecting with me as much. I’ve been all in on the storyline that’s been told with him, and I’m sure that this is supposed to be his “rock bottom”, but for the first time I don’t know where the story ends. For me, it’ll feel kinda anticlimactic if he doesn’t win the championship, but at this point, I don’t think he’s going to. Cutting back to this episode, Gargano was interrupted by NXT’s no-nonsense headmaster William Regal. Regal, as we learned earlier in the episode, was conducting his investigation on the Aleister Black attack, and I guess there was no better time to interrogate his #1 star than right in the middle of his emotional address to all his fans. Regal said he needed to ask everyone about the attack “before Aleister Black comes and burns this place to the ground”, which was interesting wording to me. I’d be very much here for a more unhinged Aleister Black, even with how cool his character has been so far I think tweaking it a little bit on his return would be a lot of fun to watch. The second interesting part of this face-to-face was that Gargano…never actually denied attacking Aleister? He told Regal “you’ve known me for a long time, you tell me…look into my eyes, you’ll find your answer”, and those don’t seem like the words of an innocent man.

Gargano was interrupted by The Velveteen Dream, and The Dream came out telling Johnny he didn’t want to listen to the same Johnny Wrestling sob story. It probably wasn’t the best choice to have Dream interrupt Gargano, because the Dream can promo circles around most of NXT at this point. Also, it’s worth noting that Velveteen Dream is quickly reaching Rock levels of “pulls off some outrageous fits”. The Dream came out looking like somebody’s aunt and somehow it worked. Then Dream called Johnny Gargano “Johnny Failure”, which is just disrespectful. Johnny Wrestling agreed with me, and then he threw his crutch at The Dream. Apparently, the crutch was just to “keep the weight off [his] knee for a few days”, which seems like a slight underselling of the injury that cost him the match in Brooklyn. On a related note, Gargano vs Dream is happening next week. I’m excited, and you should be too. 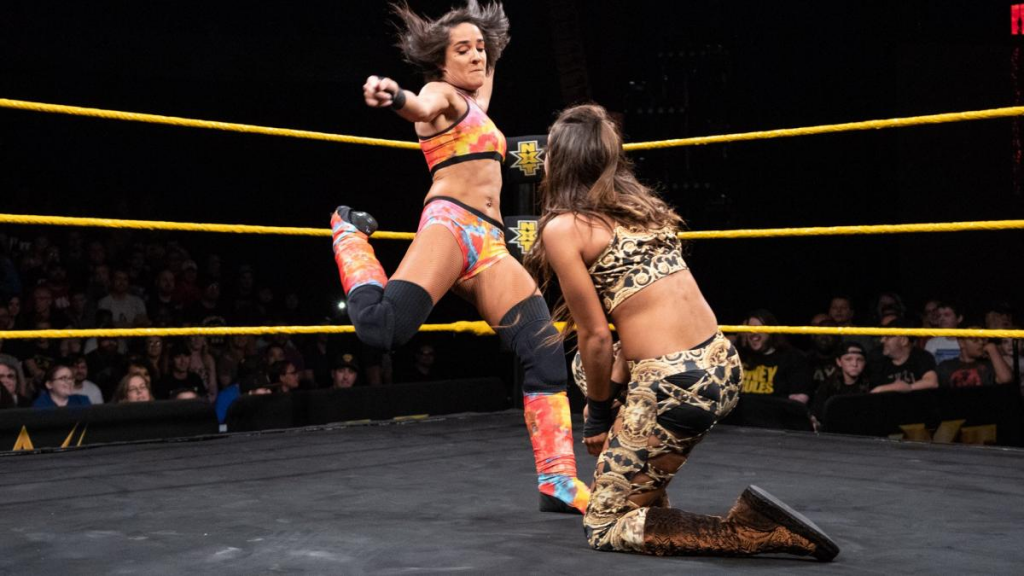 Next, we got Dakota Kai vs Aliyah, which is NOT a match I expected to see on NXT’s main tv during this set of tapings. After Dakota Kai got beaten silly by Shayna Baszler and then didn’t get a win against Baszler, I was thinking “alright well, I guess that’s all for her”. Then she showed up in NXT’s UK Women’s championship tournament, and I thought “Oh, she’s gonna just be on that show”, but apparently not. Instead of being on NXT UK, Dakota Kai is still on the stateside show, and she’s getting matches against Aliyah, which is usually a good sign for someone looking to rebuild their status in the women’s division. This match wasn’t anything to write home about, Aliyah didn’t really show me anything with her heel work, and Dakota Kai didn’t bring anything new as a babyface. Perhaps most importantly, another week has gone by and we still don’t know what “Team Kick” is. Is it a real team? Is anyone besides Dakota Kai on it? Why hasn’t William Regal been investigating this for months? Finally, I will say that that sunset flip backstabber is a really cool finisher.

Next, we cut to William Regal dismissing The Velveteen Dream from his office, and the next people Regal interviewed were Wesley Blake, Steve Cutler, and (frantically googles people)…a third fella. For the time being, I’m gonna call them “MAGA hat Sanity”, because that sounds pretty much like what their gimmick is supposed to be, and also I don’t know their stable name yet. So MAGA hat Sanity came into Regal’s office, denied attacking Aleister Black (Which you SHOULD DO if you didn’t attack someone, apparently they got the memo that Johnny Gargano didn’t), and asked William Regal for an opportunity. Regal thanked them for their time and said that next week they’d be getting a tag team match. So next week, it’s The Forgotten Sons, which is apparently their real name, in tag team action.

After a brief cut, we saw EC3 laid out in a hallway with an angry looking Lars Sullivan standing behind him. If we’re connecting dots here, EC3 tried to snitch on Lars for the Aleister Black attack, so Lars beat him down. This is a problem because EC3 was supposed to face Raul Mendoza later in the night.

Then we cut back to William Regal’s office for what was one of the more entertaining backstage segments I’ve seen in wrestling this year. Nikki Cross was spinning around in an office chair laughing maniacally, y’know, typical Nikki Cross stuff, and Regal asked Nikki to stop spinning. She did not stop spinning. Then she threw a pen at Regal’s bald-headed assistant and started babbling about a phone ringing. And then Bianca Belair came in, understandably heated at having to wait for Regal to interview Nikki Cross. For context, Nikki Cross was lying sideways on Regal’s desk laughing again. Then Nikki Cross started touching Bianca’s hair, which (understandably, I might add) did not make Bianca happy. After telling Nikki not to touch her hair, Bianca told William Regal that she deserved a title shot, which is honestly very true at this point. I guess Bianca is supposed to be a heel right now, but I’ve seen very from her that makes me want to boo her. Bianca left the office Disgusted, and Nikki Cross fell off Regal’s desk. Then she laughed more and said, “Do you have any more questions?” To Regal, who made it clear that he had a lot more questions. How he handles this job, I do not know. What I do know is that this whole scene was thoroughly enjoyable. If Nikki Cross becomes Full Sail’s poltergeist I’m here for it.

This match was supposed to be Raul Mendoza vs EC3, but EC3 was incapacitated by Lars “Snitches Get Stitches” Sullivan. So Lars came out to the ring in EC3’s place, and it seemed Lars had a different approach to the “Who attacked Aleister” question than the other people in this episode. Lars, instead of denying the attack, admitted to an entirely different attack, the one on EC3. Next, he threw Raul Mendoza to the ground a lot, aaaaaaaaaaaand scene.

Next, we got a Tommaso Ciampa promo backstage, and this is the promo that made it official for me: Ciampa isn’t just getting great heel reactions because he was in there with Johnny Gargano, he’s actually a great heel. Ciampa told us that he was gonna make his home at the top of NXT’s mountaintop and that no one would survive what was coming next. I don’t know what Ciampa is planning, but I’m guessing he doesn’t have Thanos’s finger snap capabilities. 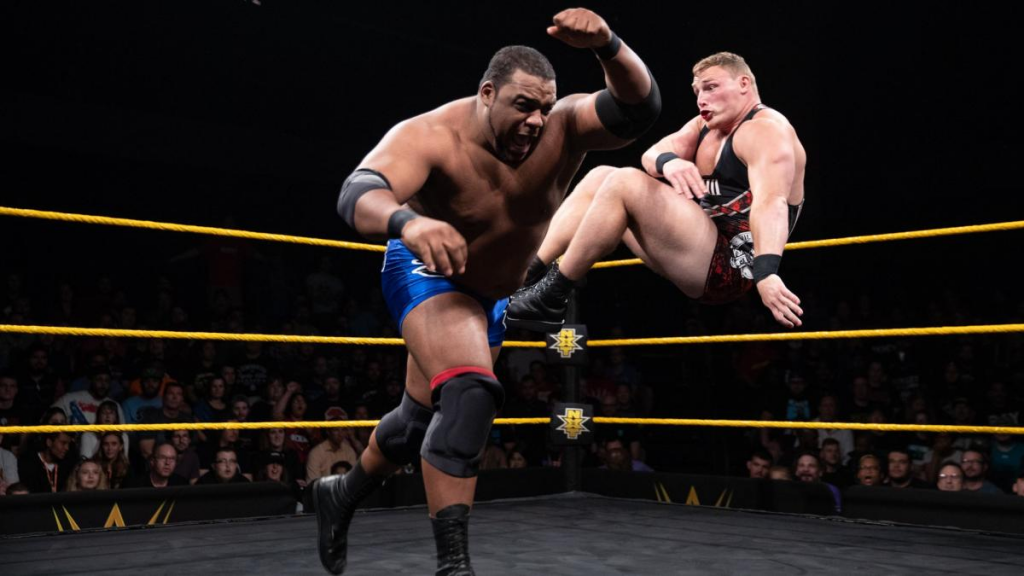 The next match we got was Keith Lee vs Luke Menzies, and my first impression here was that they did not give Keith Lee very good theme music. Luckily, Keith Lee is awesome, so he’s gonna be just fine. Lee did a hurricanrana like 2 minutes into this match, which is something a man his size simply should not be able to do. Following that Hurricanrana, Lee stopped Luke Menzies in his tracks by sticking out a hand, so I can only assume that Keith Lee also has the power of the force now. The match ended with a spirit bomb from Lee, and the Limitless one continues his rise. 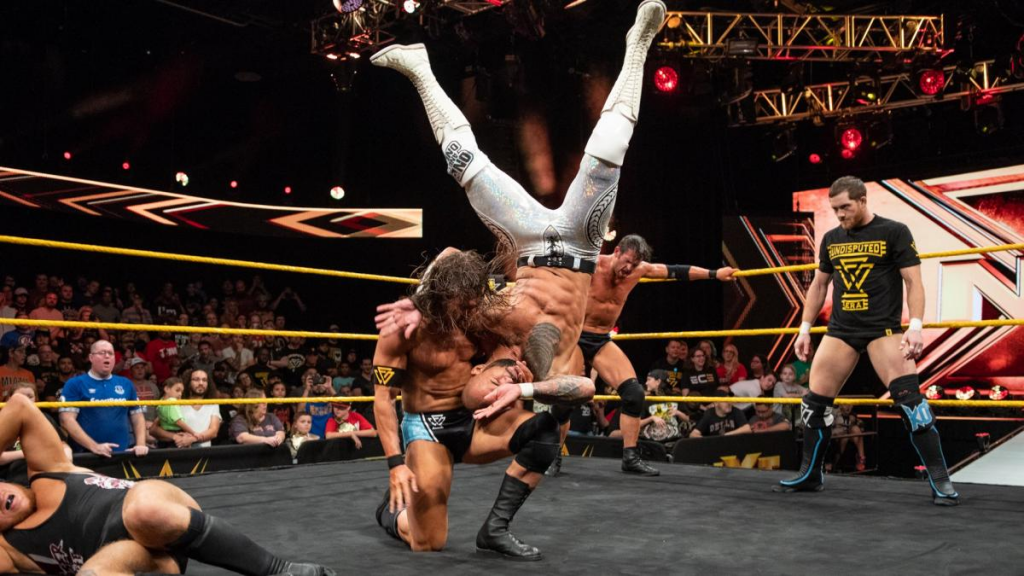 Before this match, we got a camera shot of Pete Dunne and Ricochet walking through Full Sail, and it made me laugh. Ricochet has this grin on his face like “hey how cool is this, I got Pete Dunne as my partner!” and Pete Dunne’s face says “Ah fook, I gotta wrestle with this guy”. Then we got a promo video for Oney Lorcan & Danny Burch, who return to Full Sail in 2 weeks. Kairi Sane is also going to be on tv next week, and Gargano vs Dream was confirmed. With that, it was main event time.

Pete Dunne was pretty clearly eyeing Ricochet’s North American title, which makes it even more likely that we get Pete Dunne vs Ricochet at some point with gold on the line. When The undisputed Era entered, I noticed 2 things. First off, Kyle O’Reilly’s air guitar playing is just getting more ridiculous by the day. Second, these dudes got dog tags now. Why? I don’t know. What I do know is that Adam Cole stepped in for Kyle O’Reilly in this match, I guess that unfinished business with Ricochet is really weighing on Cole’s mind. As for the match itself, you know it was pretty special when the first crowd chant during it was “Everybody! *Clap* *Clap* *Clap Clap Clap*”. Ricochet did the lion’s share of the wrestling for his team in this match and took most of the bumps for his team as well. One of the bumps he took was the half nelson Backbreaker from Roddy Strong, which always looks gnarly. Once Pete Dunne did get tagged in, he hit all his classics, including a straight punch to Adam Cole, which Cole rag-dolled in a funny way. Dunne also X-Plexed Adam Cole onto Roddy Strong, which was a cool move, and then he hit a golden triangle moonsault to the outside. Ricochet wanted to get in on the action, but he dove into Pete Dunne instead of The Undisputed Era. One of those classic mixups, trying to fly into one person and instead tumbling into another. Then Roddy Strong hit a knee lift on Ricochet, O’Reilly threw Pete Dunne back into the ring, and Cole hit the last shot for the pin. This is really the kind of thing that should happen in a match like this, the team that has worked together before beating the team of singles wrestlers through clever teamwork. It wasn’t an objectively dirty finish, The Undisputed Era didn’t cheat to win, they were just smarter and more underhanded. Then they beat up Ricochet post-match, but Hanson & Rowe hit the ring to interrupt the beatdown, and the night ended with Undisputed Era escaping up the entrance ramp while War Raiders held the ring. Next week Kairi Sane is back, Gargano faces Dream, and I’m sure there’ll be much more! Tune in on Wednesday night, til next time!