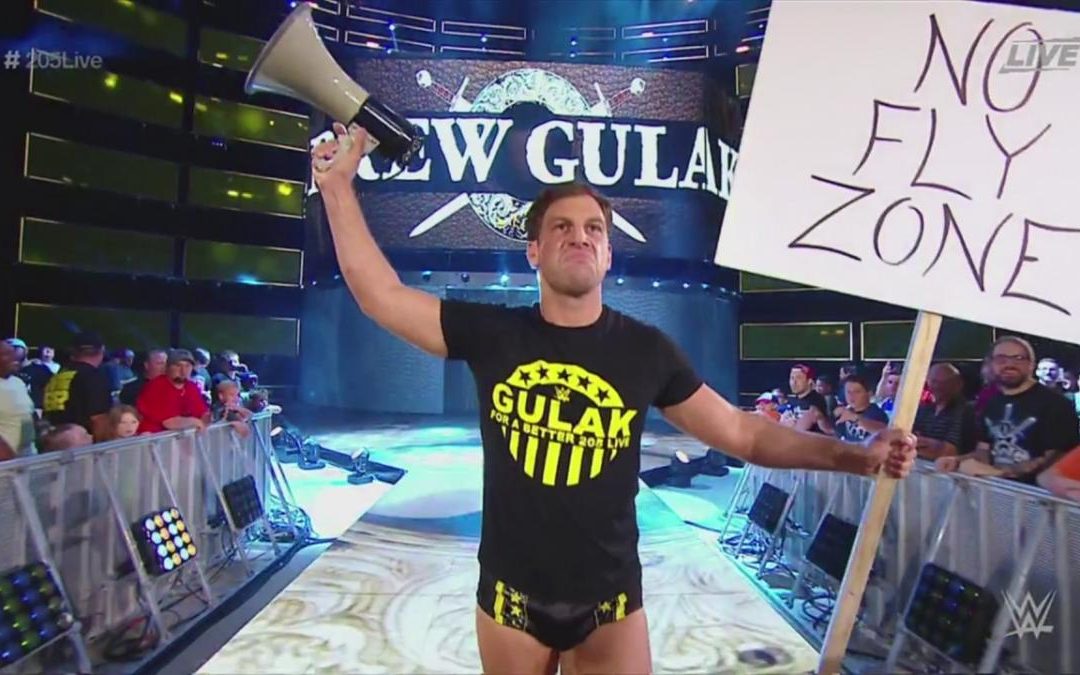 First of all, hello and thank you for giving me your eyes for a short spell in what is my debut column. My plan over the next 10 weeks is to highlight the WWE Superstars who may not be in the title picture or in the main event spot, but they definitely deserve a proverbial pat on the back for their services to the company in 2017 so far. The wrestlers will be from all over the main roster, NXT, and 205 Live. I plan to put a voice to these columns in podcast form in the near future, but that is another project for another time.

As you’ll be able to tell by my username (205 Clive), I am a firm proponent of all things 205 Live. Apart from it being 1 very manageable hour of viewing a week, and it’s lack of unnecessary interference from the higher echelons of “Creative” (up until recently I suppose), the Cruiserweight Division show has given birth to some of the most wholly realized and finely fleshed out characters on the entire WWE roster. One of those Superstars that I look forward to watching every week is a certain Mr. Drew Gulak.

When seeing Drew for the first time in 2016’s Cruiserweight Classic, I was neither blown away nor turned off by his performance. I saw him as a competent enough wrestler who stood out from the rest of the high-flyers as a mat-based grappler; a style of wrestling I very much enjoy. Little did I know that this unassuming individual would transform into the sanctimonious sourpuss we see every week, desperate to make a “Better 205 Live!”

For those unaware, Drew’s gimmick is akin to a small-town public figure running for something like Mayor, Councilman, etc etc. Except instead of running for office, he is campaigning for a Cruiserweight Division which doesn’t rely on aerial offence or bombastic and gravity-defying wrestling that the majority of the roster is known (and applauded) for. His campaign is something that Glenn Jacobs would be proud of! Powerpoint presentations. Placards. Megaphones. Buttons (badges for you UK readers). Rosettes. The whole 9 yards.

I knew that this was a similar shtick that Cactus Jack adopted when he portrayed his “anti-hardcore” heel persona in ECW in the 1990s. However upon researching video content to accompany this column, little did I know that Drew Gulak already had the blueprints for his current character in place when he played a very similar man in the extremely hardcore world of Combat Zone Wrestling. Knowing what I do of CZW, his “more sensible than thou” attitude must have come across as REALLY incongruous with the content that the promotion delivered. Check out this video to see a fresh-faced Gulak strut his
verbal stuff years before the WWE Network was even a thing, never mind having a Cruiserweight Division exclusive show.

Back to today, and this character really came into its own when the 205 Live fans were regularly wowed by a very impressive cruiserweight in Mustafa Ali – the very antithesis of what Gulak represents. This provided a great dynamic in the ring between these 2 contrasting styles. Gulak’s beliefs would be further reinforced, but at his detriment, when he himself took to the top rope to try and match Ali and score the “W”. This act of desperation did not work well for him.

This multi-week feud culminated in one of the best matches I’ve seen in all of 2017 when Ali and Gulak faced off in a fantastic 2/3 Falls Match. Drew’s ground-based tactics were getting nowhere versus Ali’s twisty turny move set, till yet again Gulak took to the heavens to beat his nemesis. However yet again this was to no avail. For anyone who hasn’t seen it, I strongly urge you to watch 205 Live’s best match yet – a cracking match!

What we see now is a man on the edge. Even crowd chants get him riled up now, as fan favorite Akira Tozawa is the current thorn in his side. His POOOWEER PPOOOOIINNT PRESEENTAAATTIOOONNSSS (!!!) are cut short time and time again. His propaganda is delivered with more frustration. He is getting more unhinged with violent attacks. His well-kept hair is more disheveled. He is weeks away from snapping, and I for one can’t see how Drew’s story climaxes. This has been great fun for me as his spotlight has delivered simple storytelling, unique character development, and simply, fun segments.

These 3 factors, as well as always above average wrestling matches, are what make 205 Live a must watch show. No, Drew Gulak hasn’t had many title opportunities or main event storylines. However, despite many wrestling fans demanding that their favorite wrestlers are pushed to the moon via the main event, there are 2.5 more hours on a PPV that still needs content to keep the viewer engaged! Drew Gulak fills that “mid-carder” role perfectly, and that is why he is my first un-sung hero of WWE in 2017. Thank you, Mr. Gulak. In my humble opinion, you have indeed created a “Better 205 Live!!”