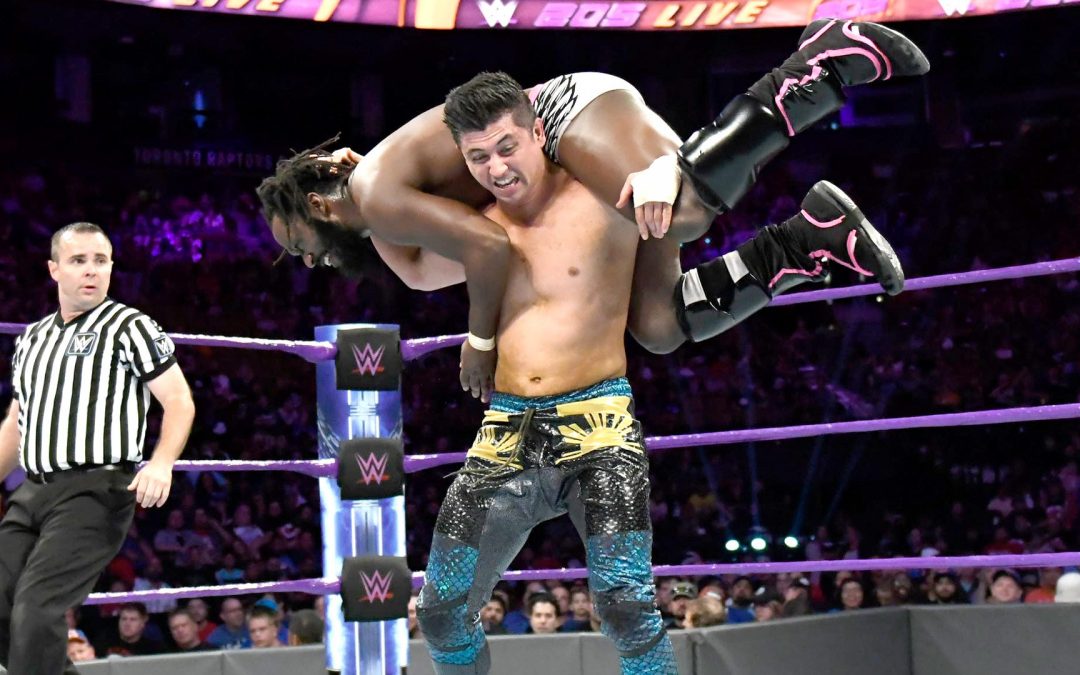 In the summer of 2016, TJ Perkins’ WWE career got off to a flyer – pun well and truly intended – when he was earmarked by HHH and Co to be the winner of the inaugural Cruiserweight Classic tournament, as well as be crowned the new Cruiserweight Champion, just for good measure. I personally had no qualms about him winning the whole shebang. He wasn’t exactly billed as an underdog, but him picking up wins over some household names from USA, Mexico, and Japan peaked my interest. Despite his cocky dabbing pose, he wasn’t too villainous a character; merely quietly confident in his wrestling ability. And it was great to a see submission finisher protected as much as his modified kneebar. As the tournament continued, it was clear this signature hold was a force to be reckoned with.

I was excited about the addition of TJP and other cruiserweights to Monday Night Raw, believing it would breathe a new lease of life into the three-hour show that’s often a slog to sit through.

Thanks to some uninspiring booking, however, TJP and his first opponent proper, Brian Kendrick, failed to set the heather alight; a sad contrast to both men’s balls-to-the-wall affairs earlier in the year. Something just felt off about the whole feud, and the Cruiserweight division as a whole, for a number of weeks.

For loyal fans of 205 Live, things went up a notch or ten when Neville revitalized EVERYTHING in the space of two minutes during his heel turn in December. The Newcastle native had a truly devastating start to his Cruiserweight career and plowed through a significant number of the show’s babyface contingent.

Shortly after Wrestlemania, when things were really picking up between Neville and Austin Aries, Neville began whispering false promises in Perkins’ ear about how Aries was stealing his opportunities for a shot at the title. Like Pavlov’s dog, Perkins carried out his master’s bidding and attacked Aries. With Jack Gallagher coming in to support Aries, the program between these four men was fascinating. Personally one of the more interesting stories of the whole year. Perkins made a big impact in Neville’s’s ongoing war with Aries and was under the impression that his reward would be an eventual shot at the title. The WWE audience was under no illusions about how this was going to turn out.

It was only a matter of time before Perkins was thrown under the bus by the maniacal King of the Cruiserweights. Perkins was delusional throughout all of this. That delusion is what gave Perkins’ character a nasty side. He was willing to do whatever it took. Anything at all to get his title shot. But he was blinded by this to see that Neville, despite granting Perkins a title shot, destroyed his trust and confidence by “betraying” him one night before this title shot. It was enough to make me ever so slightly sympathize with TJP for being so naive. However. That sympathy wouldn’t last long.

Over the summer and early autumn, Perkins became embroiled in some “friendly competition” with Rich Swann, someone he defeated on the way to Cruiserweight Classic victory the year prior. Wins and losses were traded, and Rich Swann, bless him, still saw it as friendly competition. On the other hand, Perkins became a sore loser or a sore winner, depending on the outcome of their matches. One week on 205 Live, where TJP got the win over Swann, he gloated in excess for a day and an age, literally mocking Swann’s signature dance right in front of him and getting in his face backstage after the match. This portrayed Perkins as nothing more than a spoiled brat. An unbearable child. Nobody likes a sore loser, but having someone rub a victory in your face? That’s sure to raise your heckles. I felt genuine sympathy for Rich Swann at the end of this episode and took note that TJP had done his job – portray a heel – very effectively.

There was still some back and forth between the friends-turned-foes over the next few weeks. His behavior became more erratic as time evolved. Playing possum with an apparent leg injury. His lack of goodwill when beating a local talent in less time than Swann, despite Swann and said talent exerting themselves in a well-contested back and forth encounter mere moments before.

TJP finally showed his true colors, leveling his former friend with a beat down and ripping out one of his dreadlocks in the process. Just like his being betrayed by Neville months earlier, the WWE audience knew it was a matter of time before TJP would snap. For me, this was the moment that TJP ceased to hide under Neville’s shadow, and became his own man, for better or worse.

Unfortunately, this definitive heel turn seems to have been for nothing.

Perkins was soundly beaten by Swann in their rubber…rubber…super duper rubber match; two nil in a two out of three falls match. That was bizarre to me. Sadly for Perkins, it appears Swann has the eye of the creative team after this feud. He, along with Cedric Alexander, both went on to have a high profile rivalry with Brian Kendrick and Jack Gallagher. Additionally, at the time of writing, he has also qualified for a number one contendership match for the Cruiserweight Title.

Perhaps this is due to Swann’s commendable portrayal of a babyface in peril, overcoming the odds when it mattered most. However, what of TJP in all of this? Was his commitment to becoming a smug arsehole of a character, along with his constant reliability in the ring, not enough for the higher-ups? His story with Swann has admittedly come to a natural end, but surely they have something planned as a reward for his hard work from April onwards? The hierarchy of the 205 Live villains has been clearly laid out with Enzo Amore and his lackeys taking up a lot of TV time. This frankly has me concerned for TJP, especially as I haven’t seen him on the show for a while.

As I frantically type these words, I’m quickly working myself into a shoot, as the smarks would say. Nevertheless, I have to remind myself that TJP has had a lot of important screen time over the last year. 205 Live is a busy roster for only one hour of TV a week, and he has personally been one of the better acts on the show. It’s plain to see that the roster’s main event pushes work in a revolving door format. Here’s hoping that Perkins’ time near the back of the queue is coming to an end.

You can read more of my columns right here on socialsuplex.com, as my “Un-sung Heroes of 2017” draws to a close in time for the new year.

Additionally, you can hear my opinions on all things WWE in “The Ricky & Clive Wrestling Show”, one of the podcasts that make up the Social Suplex network.