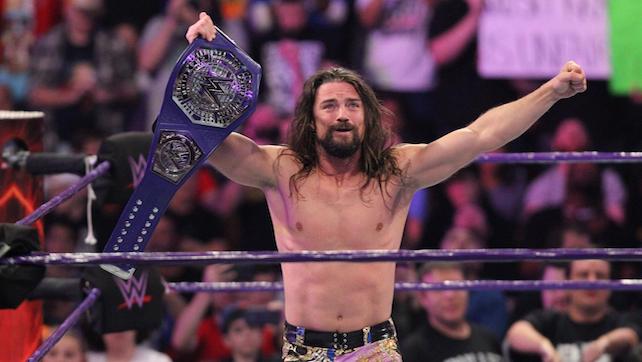 Let me start by saying that I didn’t think I would be including Brian Kendrick in the unsung heroes series. In fact, until recently, I found it hard to appreciate him and what he offered to the product. It has been a regular sticking point for me over many months. I prefer the villains in most of WWE’s feuds. Why could I not relate to this particular bad guy? He wrestles ugly. He insults his opponents and gets under their skin. He thinks himself more intelligent than everyone around him. These are all aspects of a good heel. So why was he not working for me?

During the Cruiserweight Classic, his portrayal of a man with few chances left to wrestle for the sport’s biggest company left me a bit cold. To me, that tournament had a realism that you don’t often see in WWE programming. Apart from matches having predetermined outcomes, the knockout format gave it a sense of genuineness. Kendrick’s vignette treatment of a man on borrowed time was a bit too “kayfabe” for me. I wasn’t sold either by his consoling embrace with Daniel Bryan after he bowed out of the tournament. It didn’t take a genius to figure out that if some wrestlers would be awarded full-time contracts after the tournament, then Kendrick had a decent chance of being one of them. Because of that, personally, his journey through the tournament felt false in comparison to other competitors’.

This is what put me off him immediately when cruiserweight wrestling was reintroduced to the mainstream of WWE. I felt a strong apathy to his time on screen, when I should have been happily jeering and hissing this character.

However just like a novel, film, or TV show that you feel plods along too slowly, then the big reveal at the end ties all the plotlines up into a neat little bow, my appreciation for Kendrick came much later in his own personal story.

As I mentioned in a column earlier in this series, Kendrick’s work with TJ Perkins didn’t have the same excitement to it that one would expect, compared to the frenetic matches on display in the CWC. Kendrick slowed things down considerably when WWE Creative began conceiving storylines for the cruiserweight division, and then 205 Live, although that might not actually be his fault. The main roster’s matches and programming has a certain style that Vince McMahon envisions, and it might have been a case of Kendrick and TJP having to slow things down to match that vision. Similarly to some NXT call-ups, it took time for the cruiserweight division to acclimatize to the more mainstream environment of Monday Night Raw, away from the comfort of a loyal and indie-centric Full Sail crowd.

Nevertheless, even if the order to slow things down is true, this direction benefitted Kendrick’s style and the character he was trying to portray. In retrospect, I should have realized at the time that this might have been the plan all along.

One of his character’s traits is to slow down the match by literally trapping his opponent, whether it is with ring tape, leather jackets, or the nooks and crannies of steel steps. At first, I thought this work to be quite mundane, but as time progressed I realized that this is a great trope for a heel to include in his arsenal. From a psychological aspect, it is obviously frightening to be trapped, in the crosshairs of a conniving predator. Kendrick teases his prey excellently in this regard before he inevitably strikes with malice. He regularly uses “props” to his advantage in matches, making the most of his environment. He recently used a ring bell to assault Jack Gallagher. This was done with such brutality that the match was stopped due to the beating Gallagher was a victim of. Again, this brutality is something I should have respected much earlier as it was a tactic he incorporated at the very beginning with TJP.

I’ve thought for quite some time now that Brian Kendrick shares some parallels with a certain Bray Wyatt. They both single out a specific wrestler and deem them the next casualty in their evil crusade. They both prey on their victims, bringing the protagonist’s flaws to the fore. They both win the occasional bout in their feuds but, ultimately, both fail in their mission when the feud ending match comes calling.

Wyatt and Kendrick from time to time also “convert” adversaries to their cause. Just like Daniel Bryan and Randy Orton aligned with Wyatt, Gallagher went to the dark side with Kendrick. However, the difference between the two antagonists here is that Gallagher’s brainwashing felt genuine. We all knew it was a matter of time before Bryan and Orton would escape the clutches of The Eater of Worlds. In contrast, Gallagher’s mindset is clear to me. He is dedicated to working alongside Kendrick regardless of the obstacle(s) before them. This is where the similarities end between the two. This is a goal that Brian Kendrick can put in the win column, whereas Bray Wyatt’s credibility and impact on WWE TV dwindles. If you ask me, it’s Wyatt who’s on borrowed time, not Kendrick.

Kendrick and Gallagher have now become a dominant duo in the mid-card of 205 Live, inflicting violence, pain, and misery upon their opponents. As much as I enjoyed Gallagher’s jovial English gentleman character, his heel turn had a profound effect on me. This is when it all clicked into place with regards to Kendrick’s mission in WWE, and his work as a whole.

In hindsight, I can finally appreciate what he brings to the table and how all his basic character traits, in the end, undermined Jack Gallagher. His nasty wrestling style was a polar opposite to a babyface Gallagher’s beautiful mat-based grapple and submission style; something I assume would irk Gallagher from a professional viewpoint. Kendrick regularly calling Gallagher out as a clown also bothered Gallagher, a man proud of his gentlemanly credentials. Kendrick got under Gallagher’s skin both in and out of the ring to the point where the Brit felt he had no other choice but to default to a base emotion. Rage.

Kendrick has done what few heels manage to do; completely transform an enemy’s character to mirror his own. Now a fan favorite who brought smiles to many in attendance is looked upon with derision and disdain. That is to be commended.

To put it bluntly, I used to genuinely dislike Brian Kendrick, but now that I’ve taken the blinkers off, I realize that is how I’m SUPPOSED to feel. He is actually a genuine villain. Wrestlers whose job is to receive organic jeers from a live WWE audience, and actually receive those boos, are few and far between in current times. The Revival, The Miz, and Elias are some members of the minuscule group that come to mind. There is no reason why Brian Kendrick can’t be added to that list also.

Kendrick is talented enough to be a prominent player in the mid-card of Raw or Smackdown, so he should definitely be reconsidered for the main event scene on 205 Live. If Enzo Amore wasn’t gobbling up an unacceptable amount of TV time in the solitary hour of the show per week, we might have a proper heel at the top of the card again. You never know; we might even return to the quality offerings from this year’s Spring and Summer. We might get some of that 205 Live magic back……

You can read more of my columns right here on socialsuplex.com, as my “Unsung Heroes of 2017” series draws to a close in time for the new year.

Additionally, you can hear my opinions on all things WWE in “The Ricky & Clive Wrestling Show”, one of the podcasts that make up the ever growing Social Suplex Podcast Network.