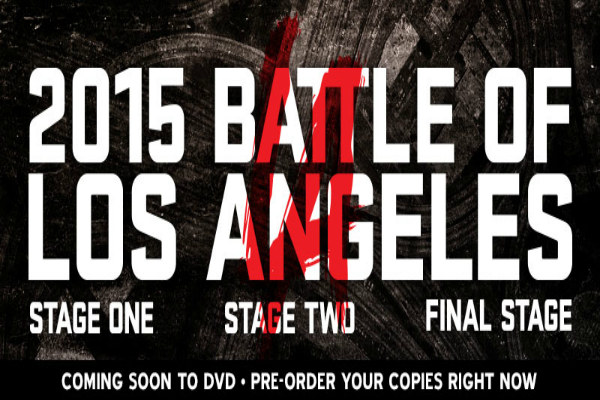 On August 29th, I showed up to American Legion Post #308 in resplendent Reseda, CA with a bag of Taco Bell in my hand for my buddy, Kamaron. He had been waiting in line for the three of us (me, him and our other friend, Cam) for 2 and a half hours and needed some nourishment. We still had an hour and a half to go before the doors would open. We also still had three full nights of professional wrestling to digest. This was the 2015 Battle of Los Angeles, a 24 man tournament put together over the course of a weekend with non-tournament bouts thrown in each night for the sake of variety  put on by independent promotion Pro Wrestling Guerilla. The winner would take home a big, shiny trophy and be declared the #1 contender for the Pro Wrestling Guerilla Heavyweight Championship.

The Battle of Los Angeles has become a premiere event in professional wrestling not just because of match quality but because of all the regions of the world talent is pulled from to compete. The United States, Holland, Wales, Canada, Scotland, England and Mexico were all represented this year. This resulted in dream matches, a variety of wrestling styles and talent clashing who may not ever clash again.

A non-tournament bout saw Angelico & Jack Evans take on The Inner City Machine Guns (Ricochet & Rich Swann). A ten-minute dance battle took place before a single hold was applied which is not a complaint, mind you.

The main event featured three-fourths of the newly minted stable Mt. Rushmore 2.0 (The Young Bucks & Roderick Strong) take on the team of Marty Scurll, Zack Sabre Jr. and Tommy End known collectively as Eurotrash. The match featured stiff hits, high spots, double team offense and grade A shit talking by everyone involved. We didn’t leave the legion post until 12:30 AM but we would’ve stayed longer if we needed to if it meant there was more to see.

The first half of night 2 blew all of night 1 out of the water. Tournament wise you had Marty Scurll vs. Rich Swann, Ricochet vs. Zack Sabre Jr., “Speedball” Mike Bailey vs. Drew Galloway, Chris Hero vs. Timothy Thatcher and Angelico vs. Jack Evans.

The standout match from this crop was Bailey vs. Galloway. Mike Bailey is an amazing underdog and babyface. He comes to the ring wearing a tae kwon do gi and he has the most adorable face. He looks like a child got lost on his way home from karate class. Galloway is a huge 6’6 Scotsman. They beat the living shit out of each other.

A non-tournament bout put the luchadores from Lucha Underground on display with AeroStar & Fenix teaming up to take on Pentagon Jr. & Drago. This match featured death defying leaps and was so fucking good that the audience literally threw money into the ring at the luchadores to show affection, which is a tradition in Mexico. 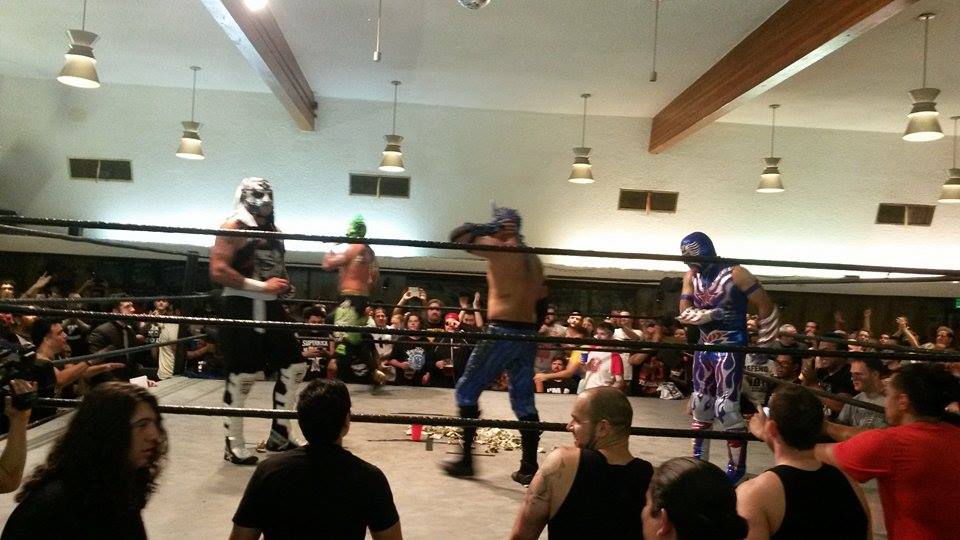 The main event featured three-fourths of Mt. Rushmore 2.0 once again. This time with the pairing of The Young Bucks and PWG legend Super Dragon. They took on three men of can’t stand 2.0 in Andrew Everett, Trever Lee and Biff Busick. That’s putting it mildly too. This match was contested under guerilla warfare which means no rules and weapon spots are encouraged. The whole crowd stood on their feet for this match minus an older man in the front row who looked like someone’s father.

Ladders and chairs were thrown. Trever Lee dove off of the stage in the back where they do commentary. Someone was put through a table. Superkicks were dealt out using shows with thumbtacks on the bottom. The finish came when Super Dragon curb stomped Biff off the top rope with thumbtacks to the head. It was chaos and it was beautiful.

For night 3, my friends and I showed up at 1 pm. You see, PWG doesn’t do assigned seating. People show up upwards to 5 hours before bell time in order to secure their desired seating. We showed up at 1 pm anticipating a 5 pm bell time. They didn’t start letting in until 5:30 pm. The southern California heat made it upward to 104 degrees that afternoon. My friends and I took turns marinating in the air conditioning of my car. I was afraid that I would be so exhausted from the heat that I would have no energy left for the show.

Once we made it inside, we promptly claimed our seats in the 4th row in the center on the side of the hard camera where all the wrestlers attention would be devoted to for the most part. The opening match featured Brian Cage versus Jack Evans. Jack Evans cut an amazing opening promo about how he was The Rock’s favorite wrestler. The match featured Brian Cage, who many call Lucha Lesnar, physically decimating Evans. Even tossing him into the fans he chastised minutes before. Evans pulled out the win though with a roll up after getting in virtually zero offense. I found myself on my feet cheering, chanting and clapping for a squash match with a plot twist. My fears of having no energy were no gone. The PWG roster had given me their all so far and I would return the favor.

In addition to the quarter-finals, semi-finals and finals of the tournament we were treated to an 8 man tag match featuring the eliminated dudes from round 1. On one side, you had Thatcher, Drago, Everett and Andrews. On the other team, you had Gulak, Galloway, AeroStar and Trent? Then the psychopath killer, Tommaso Ciampa showed up unadvertised to join Thatcher’s team. The teams were now uneven. It was going to be 5 on 4. Thankfully, for the other team, Chuck Taylor answered the call and made it an even 10 man tag match.

Chuck Taylor is one of my favorite wrestlers in the world. He not only has a gift for wrestling but a gift for comedy as well that he incorporates in his matches. Chuck made his reputation off of invisible grenades and scaring children at ringside. A few months ago, Chuck announced his retirement from wrestling. He had begun referring to his recent slew of bookings as his retirement tour. If his retirement is real, (everything in wrestling is treated as a work) then I can’t think of a better way for him to have his final PWG match than with a 10 man comedy tag match that featured slapstick, nut shots and slow motion. I hope Chuck isn’t really leaving but is he is I’m really going to miss him. 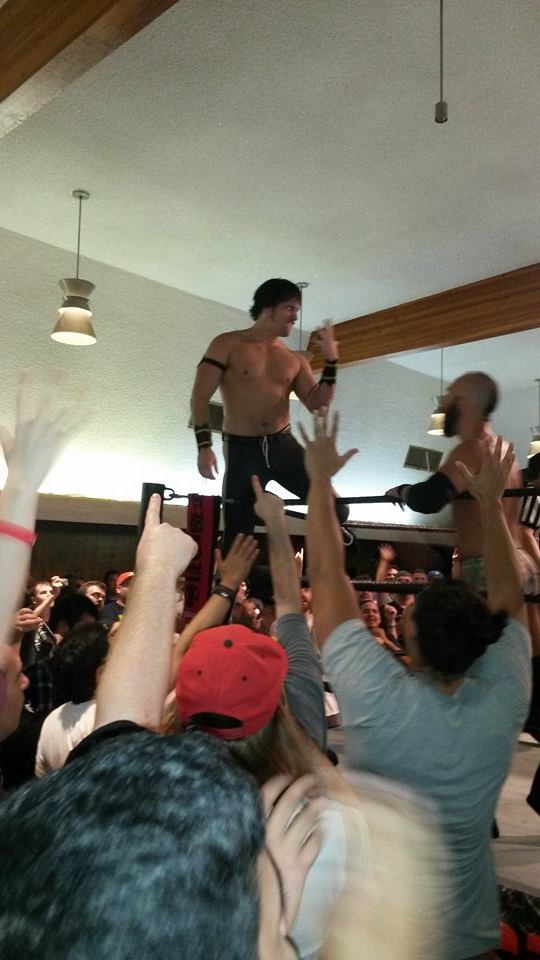 Now is the time to tell you about Zack Sabre Jr. Zack is a thin Englishman with a specialization in chain and submission wrestling. He doesn’t sound or look intimidating whatsoever. Not even his theme music is intimidating as he comes out to a Joy Orbison song.

On night 1, he ate a loss in the 6 man tag but he did it going down swinging as he fought all 3 men on his own after losing End and Scurll.

On night 2, Zack defeated Ricochet in the first round. Ricochet had probably the longest singles win streak of anyone at PWG going into that match.

On night 3, Zack drew Pentagon Jr. in the quarter-final. Pentagon Jr. is an undead skeleton ninja that is the most frightening wrestler I have ever been in close proximity with. I was even too scared to go buy a shirt from Pentagon and I’m a big fan of his. Zack got into the ring and showed no fear. He went hold for hold with Pentagon, another submission specialist, then seemed overwhelmed once Pentagon started working in his lucha libre style. Zack forced Pentagon to submit in the end and I considered him to be the bravest man in the world.

The finals saw a triple threat elimination match between Speedball Mike Bailey, Chris Hero and Zack Sabre Jr. Each man had wrestled two matches previously and already looked beat to shit. That didn’t stop them from busting out the stiffest of chops, the most complicated of submission holds and jaw-dropping aerial moves. Hero eliminated Bailey first after giving him three consecutive piledrivers. Zack Sabre Jr. was passed out at my feet when that happened. The other fans and I coached Zack to his feet. He got back in there, went toe-to-toe with Hero and made Hero tap out to secure the victory. Zack Sabre Jr. is the 2015 Battle of Los Angeles winner.

After the match, Zack hung around with his trophy to sell t-shirts and take photos with the fans. All of the wrestlers did. That’s the greatest joy I take in attending PWG. After every show, the fans are given an opportunity to walk up to their favorite wrestler that night and tell them how awesome they are. The wrestlers are always appreciative. My friend bought a shirt from Speedball whose chest was red and pulpy, but he still posed for a photo. 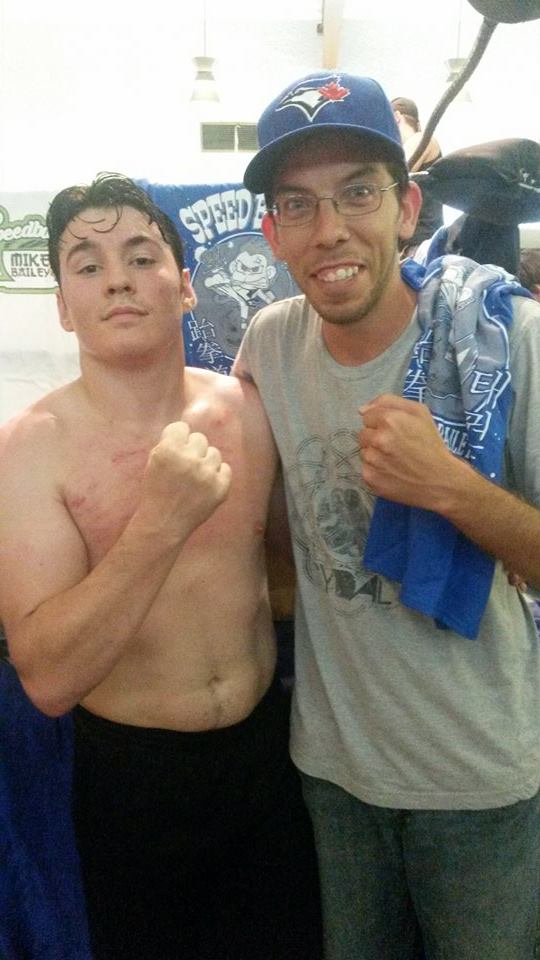 The next day, it was announced that PWG regulars and BOLA participants Rich Swann and Biff Busick were offered developmental contracts with WWE. That’s a testament to the level of talent PWG books for their shows. Other PWG alumni include Cesaro, Kevin Owens, Adrian Neville, Daniel Bryan and Apollo Crews.

I love professional wrestling. After a weekend like the 2015 Battle of Los Angeles, I know that it loves me back.