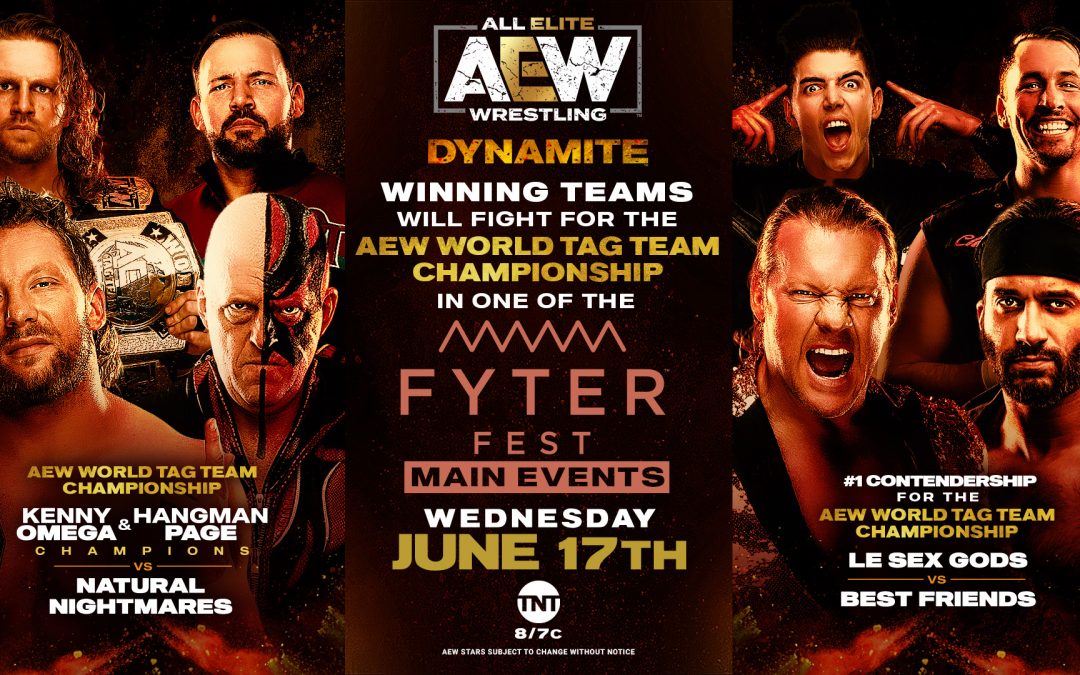 We’re on the road to Fyter Fest! This Wednesday’s Dynamite is full of Fyter Fest implications. Kenny Omega and Hangman Page will defend their AEW World Tag Team titles against the Natural Nightmares. The winners of this match will face the winners of Le Sex Gods and Best Friends in one of the main events of Fyter Fest. This week, we will also have another Cody TNT Championship match (WARNING: the preview for Cody’s match below will have spoilers.)

The Natural Nightmares have quietly worked their way up the AEW tag team rankings. QT and Dustin have picked up several wins on Dark and are getting an AEW tag title shot. Even though QT and Dustin have been on a winning streak, they are not on the same page due to QT’s new relationship with Allie. Brandi and Dustin don’t trust Allie and have banned her from ringside for this title match. However, Allie seems determined to stand by her man. With all the potential quarreling on the outside, Kenny and Hangman should have an easy time getting past the Natural Nightmares.

This week Best Friends will seek to get some revenge as they face off against Jericho and Sammy. Best Friends are so angry they’ve decided to put their number one contendership on the line. I would love to see Le Sex Gods against Hangman and Omega at some point, but I don’t think we’ll be seeing at Fyter Fest. AEW has been building to Jericho/Cassidy singles match. I expect Cassidy to somehow cost Le Sex Gods the match which allows Best Friends to keep their title match and further the issues between Jericho and Cassidy.

The Young Bucks’ face to face meeting with FTR was interrupted by the Superbad Death Squad. Sabian and Havoc failed to win the tag titles and now look to prove themselves by beating the Bucks. Sabian and Havoc have been gelling well together over the last few months. This should be a fun competitive match that ends with the Bucks prevailing. Going forward I expect to see the Bucks and FTR beating several teams in the division to eventually build to the big match between these two teams.

There seems to be a lack of direction for MJF since he defeated Jungle Boy at Double or Nothing. He’s undefeated and has two big back to back singles PPV wins. However, he hasn’t been placed in a new program or feud. It feels like they’re not ready to put him in a title match yet, but also don’t want him losing or taking part in a throwaway feud. This week he will take on Billy Gunn based on the interaction they had on Dynamite last week. I will be really surprised if Billy wins this match. MJF will get the W and then hopefully move onto something with more substance.

Who’s Next for Cody?

In my last preview, I was pretty hard on the Cody/Jungle Boy match. I will give credit where credit is due. Last week’s TNT Championship match with Cody and Marq Quen was much better. This week Cody is billed to defend the title against a mystery opponent. Due to this week’s episode being taped the mystery opponent has been revealed. Our friends over at Voices of Wrestling have confirmed that Cody will be defending against the “Stroke Daddy” Ricky Starks.

Ricky Starks was recently in the NWA and was the NWA Television Champion. There have been reports that Starks did not re-sign with NWA which started the rumor mill that he could be AEW bound. As of right now, I don’t have confirmation on whether or not Starks is signed or if this is just a one-off appearance. I hope that this does lead to Starks becoming a full-time member of the AEW roster. I’ve been very impressed with his in-ring work and promos in NWA and I believe he would be a great fit for AEW.